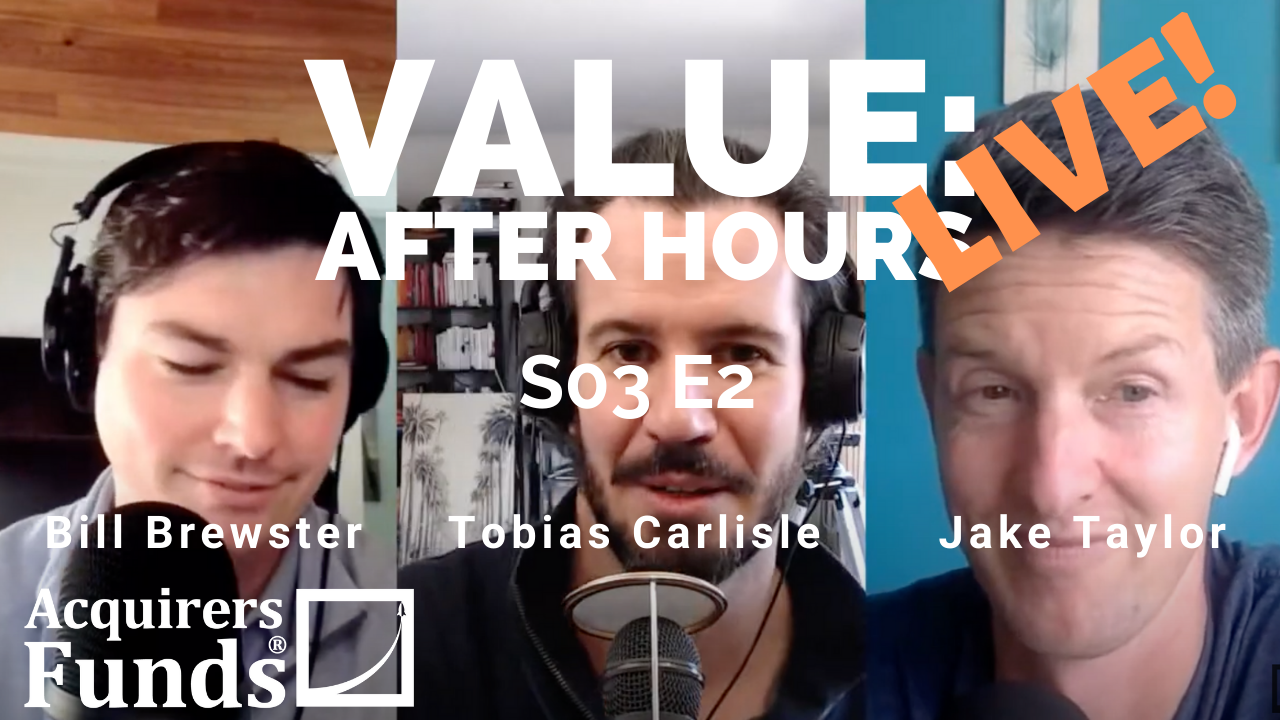 During their recent episode of the VALUE: After Hours Podcast, Taylor, Brewster, and Carlisle discussed The St. Petersburg Paradox. Here’s an excerpt from the episode:

Jake: I’ve observed the poorest third of Americans buy more than half of the lottery tickets. I’ve always scoffed at that and been cynical that it’s this kind of preying on the ignorant and poor and it’s like a kind of a predatory tax on them. Everybody knows it’s a negative expected outcome bet. The odds of winning times your payout is negative, so you should never do it. But it turns out that it’s probably a little bit more complicated than that, and a little bit more nuanced, and I was probably ignorant and foolish myself.

To explain why a little bit, let’s play a little game here. I’m going to put $2 into a pot, and then you’re going to be able to flip a coin, and if it comes up heads, then I will double the amount of money and we’ll play again. But if it comes up tails, we stop, the game is over, and you get whatever’s in the pot. Okay, so first, let’s say it comes up heads first coin flip, then I’m going to put $4 in, comes up heads again, $8 are now in the pot, $16, $32, you get the idea. Well, if you were lucky enough to get up to 10 heads, it’d be a little over $1,000, but crazy enough, the way that compounding works, 40 heads in and you’re up to like a trillion dollars. But you know the odds of flipping heads 40 times in a row, relatively small.

Now, what’s interesting about this is that we can ask ourselves, what’s the average expected payout of this game, and the math is such that it’s basically like X equals 2 to the power of K, where K is the number of coin flips. If you multiply it out, it’s like you have a 50% chance of winning $2 plus a 25% chance of winning $4, plus about a 12-ish– sorry, about around a 12% chance of winning $8. It’s like one over that number times the payout. You keep each one of those turns into the number one basically. So, one-half times two, one-quarter times four, one-eight times eight. You keep adding them up, and it turns out that the answer is actually infinity because it’s just one plus one plus one plus one forever. The average expected payout in one way of calculating it is that it’s an infinite payout.

The next question then you ask yourself is, it seems very odd because your gut tells you, I’m expecting to probably lose within, I don’t know, two, three, four coin flips and therefore, I’m looking more at an $8 maybe outcome, maybe I’m not even going to be able to buy lunch with it. And yet, it’s telling me I have an infinite expected outcome. The question gets interesting when you ask, how much would you pay to play this game? If it’s a truly an infinite outcome, you should be willing to almost pay an infinite price. Your entire net worth, you should be willing to put up to play this game, even though $8 or $10 is maybe what you would hope or expect to end up with.

This oddity was a thought experiment that was developed in 1738 by this Swiss mathematician named Daniel Bernoulli. Bernoulli was living in St. Petersburg, Russia, at the time when he developed this, and that’s why it’s called the St. Petersburg Paradox. We all caught up to explain. By the way, this is the same Bernoulli who has the Bernoulli principle, which is what explains why an aircraft wing produces lift like that Bernoulli effect or principle is the same guy. Anyway, smart dude, obviously. How much would you guys pay to play this particular game knowing what we just set up?

Tobias: It’s a difficult one because if you do that calculation, your expected return is infinite, but it’s a vanishingly small number on a vanishingly big number. The likelihood is very low on a very large payout. That’s why you tend to be at the lower end rather than closer to infinity. So, yeah, I don’t want to give you much for it. I’ll give you 5 bucks, 10 bucks for it.

Bill: I’m right around the same.

Jake: [chuckles] Okay, so here’s where Bernoulli actually had a pretty interesting insight. He observed basically that there’s diminishing marginal utility to each dollar, similar to like what Buffett has said about why would you risk what you have in need for what you don’t have and don’t need. He came up with this idea of logarithmic utility, which then allows you to– basically, it discounts the numbers that are up way high and puts more weight on the front end of the payments. Using that, you would actually end up with a– if you had a $1 million net worth, you should be willing to wager around $20. And then, if you had $1,000 net worth, you should be willing to go up to around $11. Looking at this principle, all of a sudden, a lotto ticket, if wealth is truly logarithmic like that, which it probably is, then playing the lotto as a poor person or less privileged suddenly is actually sort of mathematically a viable thing to do. And maybe it isn’t as predatory and it isn’t as dumb as it sort of seems at first blush. I felt like, “Oh.” I was probably judgmental about that before and I shouldn’t have been.

Jake: I think if I have it right, it’s the irreversibility of time is what Kelly added, but that’s okay.

Tobias: You have to run that one past me after the podcast is done.

Jake: Yeah. Well, to keep going on this– Well, go ahead, Toby, if you had some observation.

Tobias: The only point that I was going to make was, Kelly is the correct statement for playing the game, but I think it’s Paul Samuelson who wrote the single-word rebuttal. That only had the single syllable rebuttal, only had the one– the final word had more than one syllable in it. He points out that it’s not independent of your own wealth playing the game. I don’t know where the breakpoints are, but clearly there’s some point where once you’ve got all of your living expenses, and everything else covered, then you should be prepared to just about swing for Kelly, but up until that point, you probably– but then some people play it the other way around, if you get to like some very big number, whatever that might be $10 or $20 million of net worth plus, then you might–

Jake: It takes all the chips off the table.

Tobias: There have been practical–

Bill: Fuck no, dude, you go for your jet.

Tobias: Well, there are practical discussions of it right now on Twitter, because there are people who’ve got that kind of money in bitcoin and Tesla. They’re showing their accounts with $20 million of Tesla.

Tobias: It’s funny to watch the comments underneath where people are like, “Why don’t you just take off 19, then you get 19,” whatever, after-tax, let something ride on bitcoin or Tesla.

Bill: It’s all about step changes in lifestyle, man.

Tobias: But you don’t get to that point, if you’ve taken that–[crosstalk]

Tobias: You took that advice. Well, that kind of attitude doesn’t get you there in the first place. That’s the difficulty of this game.

Jake: Yeah. In researching this topic, I came across a post from Mostly Borrowed Ideas that he had last summer, and he referenced an article actually from 1957 by David Durand that’s called Growth Stocks and the St. Petersburg Paradox. In it, he basically draws the correlation between this infinite outcome potential, but vanishingly small odds of it, you actually being able to realize it. One of the quotes he has in there is like, “Is it possible the market may at times pay too much for growth?” Back in 1957, these conversations were happening. We’ve made almost no progress on this. That’s actually what Mostly Borrowed Ideas is talking about, is he says that it’s possible that some of the SaaS companies today may be like that 40 heads in a row flipping and so you would as a basket be willing to bet on them as one of those potential infinite outcomes.

He has a really nice quote in here. “The path dependency and optionality embedded in many of these SaaS or technology stocks may make it a durable mystery for any investor to come up with a valuation method to value these businesses.” The fact that it’s a paradox that’s a couple 100 years old, and we’re still talking about it, means that it’s really hard to value this type of situation. If growth stocks, in particular, some of these SaaS names really look a lot like that, no wonder using traditional things like DCF, it’s unlikely that we’re going to be able to have much penetrating insight into what’s going to happen.

Tobias: As somebody else pointed out in the comments and it’s regularly pointed out, every time somebody mentions Kelly, the average across every person who employs Kelly and every person who employs the strategies is different from your own personal outcome, which is highly dependent on your first few spins, particularly so on the Bernoulli example where if you lose on the first one, it’s all over. The average is–

Jake: Non-ergodic is the term.

Tobias: Yeah, the average is skewed by the big winners. It’s got a gigantic right tail distribution, and most of us are clustered well below the mean.

Jake: And yet, people are betting right now– well, at least in my estimation that there’s a lot more people who think they’re going to be catching this right tail, and they’re paying up to play this game.