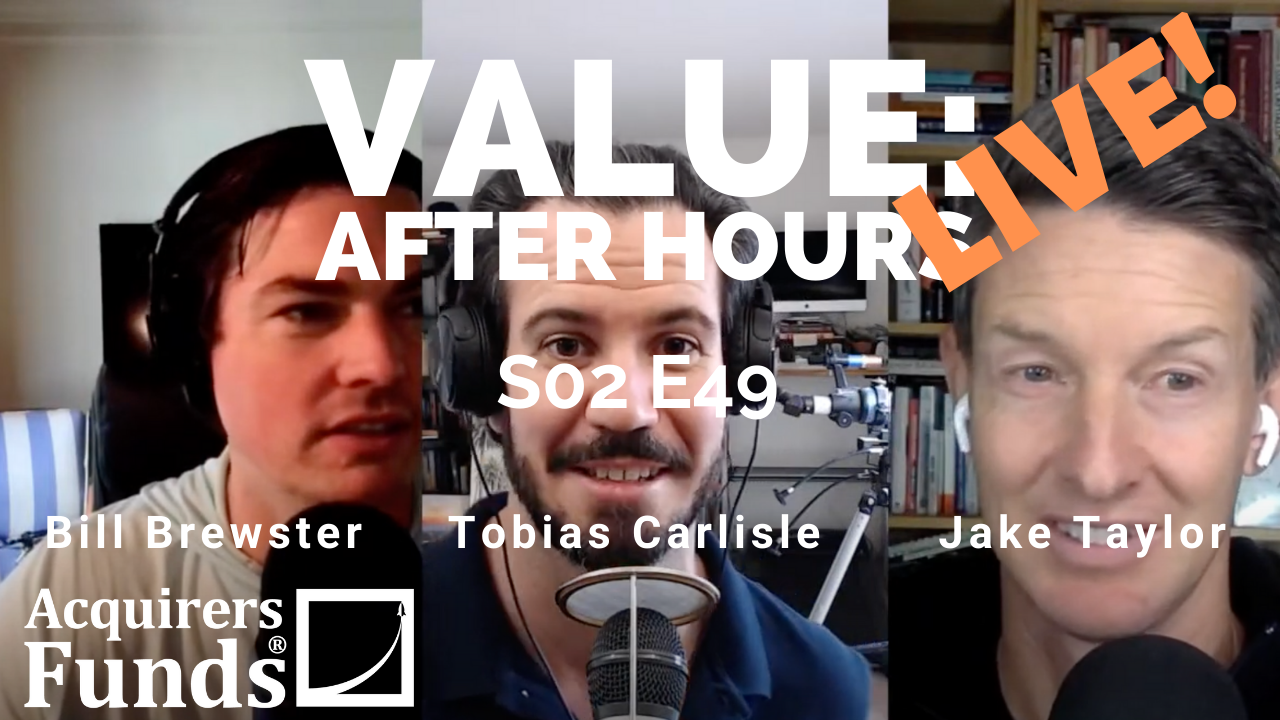 During their recent episode of the VALUE: After Hours Podcast, Taylor, Brewster, and Carlisle discussed $ZM Fatigue & Growth Forecasts. Here’s an excerpt from the episode:

I’m looking at it, you got 300% this year, okay, granted, everybody’s locked in. Then next year, we’re somehow going to grow 34% off that base, as if people aren’t using it like crazy right now. And then you come down to 21% and then you pop up to 40%. I’m sure they have some product that they’re releasing or something. I mean, these people aren’t stupid that are modeling it, but how are we going to grow 34% off of this space? Kids are in school on Zoom. You can’t do anything without being on Zoom. We’re going to go 34% of that base?

Tobias: It was one less as of yesterday.

Bill: I can’t wait to get the fuck off Zoom. You’ll see me zero times next year on it.

Bill: Every corporate meeting is on Zoom right now. We’re going to grow off that base? I don’t know, man. I just don’t trust that. Maybe I’m the idiot.

Jake: Here’s the thing. It could work, but you don’t want to make that bet 100 times.

Tobias: Do people get locked in– [crosstalk]

Tobias: Do people get locked into this– does this network effect eventually occur with everybody’s just on Zoom and it’s just easier to be on Zoom? What do you think–?

Bill: I’m sure a bull would tell you that, right?

Jake: No way, dude. Skype is just as good to me. Google Hangout or Google Meet or whatever, just as good. FaceTime? I mean, I don’t know, whatever, man.

Bill: Well, like all the people that are sitting at home that started a podcast now that are like recording on Zoom. I mean, think of how many things happened on Zoom, because nobody had anything else to do. We’re going to grow 34% off that base?

Tobias: Why does it take off?

Bill: I don’t know. This is what I’m asking.

Jake: Because you need that to get to this valuation.

Bill: If I was underwriting this thing, I’d be like, “Alright, so next year, we figure usage and everything falls off like 30%.” And I’d rebase my estimates from that.

Tobias: How’s your Qurate-Zoom bet going? Let’s get an update on that.

Bill: I don’t know. I think I’m winning. Who cares? I got two and a half years, man.

Bill: I think I’m pretty certain that Qurate’s ahead.

Jake: I think you’re ahead.

Tobias: It’s going to be tough now. There we go, that’s good. Chalk one up for the old value guys. Not we can take a knee, two and a half years to run on it, but let’s keep going.

Bill: I think [crosstalk] going to have a really good quarter. The stock market being up helps the wealth effect of the consumer. She’s at home. She probably needs some retail therapy. I think they got another–

Tobias: All right, amigos. That’s right on full time. We’re all going to be here next week.

Jake: For better or worse.

Bill: That’s right. Yeah, maybe we will say something worth listening to next week.

Jake: Let’s redouble our efforts and come back with something a little better here.

Bill: I had a great time.