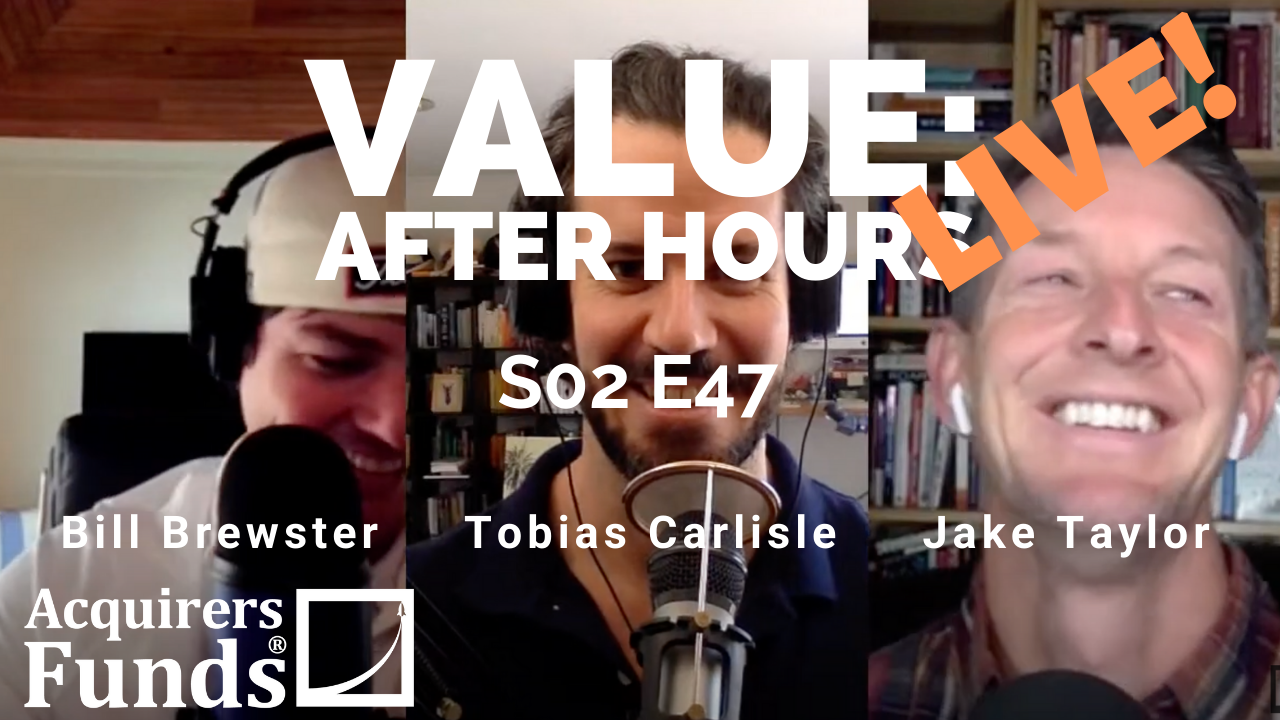 During their recent episode of the VALUE: After Hours Podcast, Taylor, Brewster, and Carlisle discussed Horsebetting – Crist Is The GOAT On Value. Here’s an excerpt from the episode:

Bill: Yeah, a little bit. Actually, I’m going to mess it up. Michael Mauboussin. Mabo-sinn? Maba-ssan? What? I don’t know. Whatever. I’m sorry.

Bill: This guy, legend, replies to tweet, me, loser, has on Twitter. And I have the nerve to not read it right away. So, how life gets. I don’t read it. Somebody pops into my feed liking it. I was like, “Oh, that looks like a good article.” And then, I was like, “Oh, that was a response to a tweet that I had.” And then, I thought, “You’re an idiot to not read this.” So, I clicked it open, and it’s a great article, I’ll retweet it or we can put it in the show notes, about how basically, it all goes to Charlie Munger’s parimutuel system and viewing stocks like horses. And the quote that really stuck out to me was, the sucker money isn’t the bet that loses necessarily. It’s the bet that picks the horse with the worst odds.

So, I think it’s not a stretch to say that at least the narrative is that it’s the horse that matters. It’s, “Oh, hypergrowth,” and this and that, and it’s like, “Okay, I get it.” But the odds offered used to matter, and the favorite still wins the race sometimes, that people still get paid out when the favorite wins the race. The point, oh, my goodness, Toby, you’re going–

Jake: Zoomed in on us.

Bill: You’re ruining my thought. Anyway, so the favorite can get you paid. But the point is, over enough series of bets, if you’re laying bets against unfavorable odds, then you’re not the house, you’re the player. I was thinking about it in the shower, where I do all my good thinking, and I thought– people bring up Discovery because I had pitched Qurate, and actually Andrew Walker wrote is DISCA the next Qurate. There is– media is something I know a little about. I don’t particularly like Discovery’s position, but if you’re going to play this game, that’s not really the right question to ask, I don’t think.

It can be because in a horse race, a three-legged horse is never going to win, no matter how good the odds are. But there’s some cutoff where a horse can win the race. Once that cutoff starts probabilistically, I think you need to start assigning odds to what your expected value is. There’s probably a price that makes sense for DISCA, as opposed to say, I don’t know, Netflix. Netflix is the horse that’s the favorite, are the odds offered worth it. I don’t know. But I think those are the conversations that you got to be having. And I think that maybe the markets rewarded people that either aren’t having it or having a much smarter conversation, I don’t know. But the fact is, I view a multiple as an implied expectation and/or perception of certainty about the future and I think human behavior is such that as a thesis gets proved out, the optimistic outlook gets priced too high. And that is how things begin to underperform, and that is how other things begin to outperform. And that’s just sort of the nature of markets. I think it’s a pretty important thing for people to think about right now.

Tobias: I agree with all that. While you’re doing that, you might not have noticed, but when you went to my camera for a moment. And It went to a different camera.

Bill: Were you going in and out while we did it?

Tobias: I think I’ve got the mic fixed. Can anybody confirm that? I think it was coming– I had it set up, so it’s coming through– [crosstalk]

Tobias: Let me respond to it. I 100% agree with all of that. I think that that’s all a very useful analogy for describing what we’re doing. But I sometimes think we overcomplicate these things for ourselves by trying to– and I’m guilty of this more than anybody else. I like your analogy. I like Mauboussin’s analogy. I sometimes think that if you just sit down and work out what you think this thing is going to return and then you can get some comfort around in actually getting there, it really doesn’t matter what everybody else thinks about the market or the particular. And it doesn’t matter if it goes against you either. Because you’ve locked in a certain amount of return for yourself by buying at any given price, assuming that your analysis is right, assuming you’ve some sort of margin of safety built in. I’m just sort of at that point where it’s been such a long period of underperformance for value, and a lot of that has been do the work and see the multiple rerate against you, it’s sucks, but ultimately, you just have to get comfortable with that. Otherwise– the stock market starts wagging– you become the tail on the stock market rather than the other way around.

You’ve got to focus on your own process. I think it’s an [unintelligible [00:07:54]. I think JT might have given it to me a little while ago, and it’s a stoic philosophy idea where all you can focus on is the draw on arrow– thanks to Steve MacKinnon for this one, all you can focus on is your process, as you fire the arrow, the target is to be desire. You can’t force it, all you to do is draw back on the arrow and let it go and hope that the [unintelligible [00:08:22] analysis correctly. It’s still too quiet. Sorry, guys.

Bill: You’re also breaking up a little bit, I’m not going to get picky with you. Jake, what’s up?

Jake: I mean, I think this is exactly the right way to think about it. Every single investment has some odds implied in the price. What’s amazing is if you can back into what the expectations are of everyone else based on today’s price and you can get a sense, does that make sense to me or not? And decide whether you want to accept or reject that as a reasonable proposition. And you don’t have to have an opinion on everything. And that’s also a nice part of it, and stay in your spots were the things that you know that type of horse the best and what it’s capable of, and then you have a better– you have a much better chance than of handicapping the odds that are implied in the price. And just staying within that little spectrum of the world and the odds that are offered, I think, if you do that over a long enough period of time, you can do really well. It’s when you get outside of that, or when you look for other people– Like you’re saying, the tail wagging the dog of– well, the price has been doing this, therefore, it must be good. Those are two independent things.

Tobias: To be fair, you probably– it’s hard because at some stage you also have to be is– I hope my mic is better now. I’ve been playing around with the settings in the background there. The hard thing–

Tobias: This is as flustered as I get, mate. The hard thing is you don’t want to be too rigid either. If it really is going against your hard, it’s possible that you’re the other guy sitting at– you’re the patsy at the table and you just haven’t figured something out. So, that’s hard too. No man is an island. It’s hard to just sit out in the middle of nowhere, and be absolutely certain, “I am right on this thing,” and the market is completely wrong. I’ve done that enough times, and I’ve ridden them all the way to zero. [laughs]

So, I try not to too much anymore, but it’s hard. I think that’s what value guys and good investors should spend a lot of time thinking about the behavioral aspect of what they do. And most of it is just making sure you don’t do things that you know you shouldn’t do already. That’s the hard part. The rational part of your brand is probably pretty, pretty good. The rational brain probably figures out what you should be doing most of the time. It’s the emotional part of the brain, that’s the one that gets you in trouble.