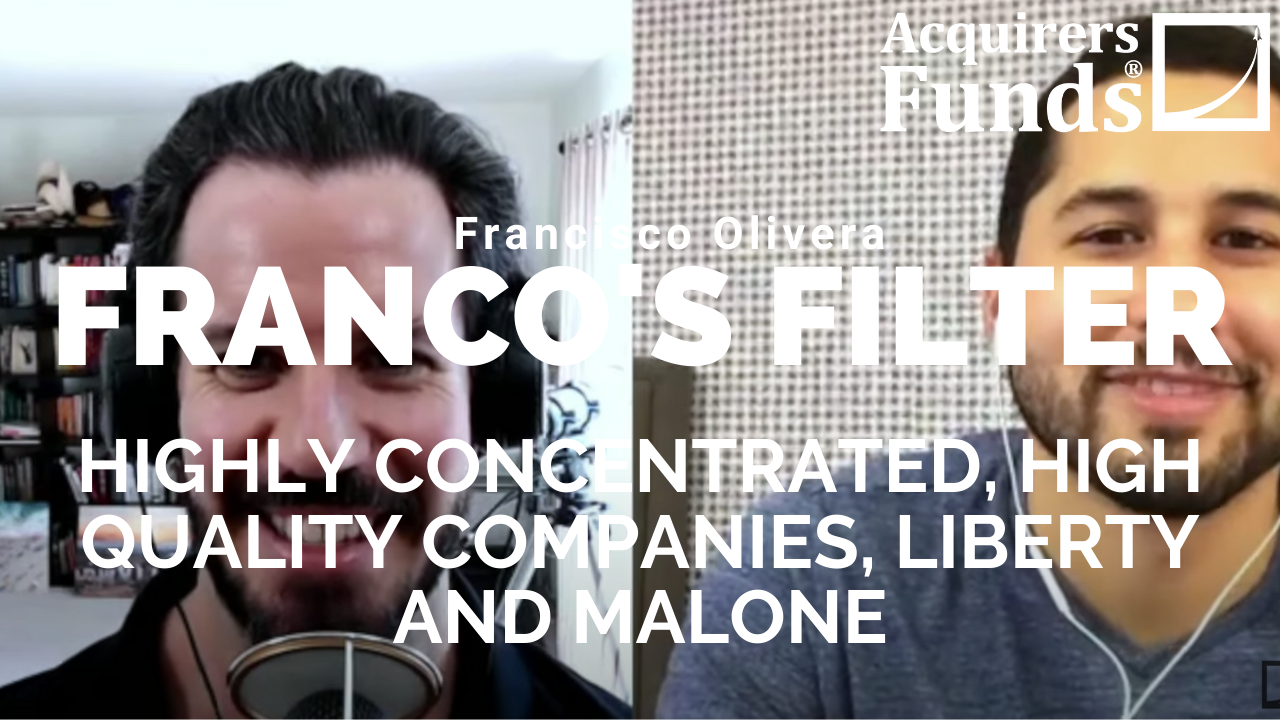 During his recent interview with Tobias, Francisco Olivera, President of Arevilo Capital Management discussed Taking A Concentrated Position That You Can Hold For 5+ Years. Here’s an excerpt from the interview:

Tobias: Bill has this great line. He said, “Francisco is the pickiest investor I know,” in a good way. What’s he mean?

Francisco: I guess, maybe I reject too many of ideas.

Tobias: You’re like Charlie Munger, you’re the abominable no man.

Francisco: [laughs] No, It’s funny. We run a pretty concentrated portfolio. So, what I try to do is, basically can I imagine myself after doing the work putting 10% or more? Maybe ideally 15. But 10%, maybe can start at 5%. So, I’ll eliminate something that’s basically just a low multiple stock. And I’m not saying that’s all Bill’s pitched at. He has pitched a lot of good ideas as well that I probably shouldn’t have rejected offhand. But with that framework, sometimes there’ll be things that are low multiple, but do I want to hold this for five-plus years? And that’s where it gets a little difficult, but it’s great to chat investing ideas with him.

Tobias: So he said, I should ask you about your filter. So what’s in your filter? Why aren’t those ideas getting through your filter?

Francisco: [chuckles] Basically with that in mind and knowing that I want to have at least a 10% investment in– I want a good value, but also being long term, you want a business that you know is going to be sustainable. But if you’re holding long term, you want that intrinsic value to grow, not just be sustainable. And just basically there, you eliminate a lot of businesses that probably will never understand just the industry period, like healthcare is just something I’ll probably never invest in. Never say never, but it’s just a little bit too tough for me, seeing where many of these businesses will be in the long term or just dealing in the regulatory part of the business. So, that’s the first filter.

The second filter is basically, if I’m going to partner with this business, buy this business, hold it for many years, to me, the management team is almost as equal importance as the quality of the business, and as a price as well.

Basically, that all comes together with concentration because you don’t want to be wrong, I guess, when you’re putting a 10% position. I think sometimes you can put a 1% or 2% position, something that can basically have enormous upside, but if you’re wrong, it’s really not a big deal and you’re down 20% and you know that on that stake, and you know that basically it’s not going to work out in the markets. You can sell, it’s not a big problem for the portfolio, but if you’re down something like 20%, 50%, and it’s an impairment on that 10%, and you do that repeatedly, it could basically harm your performance long term and maybe your investing career.

So, it’s kind of with that filter being pretty strict, and knowing what I don’t know, which I guess a lot of investors say as well, but I try to be strict in that discipline and not try and– if something I think it’s a little bit too difficult to understand, I try not to put pencils down and go to the next one, or maybe just keep following it. I think that’s why the filter might be a little hard, but sometimes it’s not necessarily a good thing. Sometimes, it’s good to continually learn and follow something and maybe eventually you’ll get there, but just that initial layer of spending maybe five minutes with something and going to weeks and maybe months reading about something, you can eliminate a lot of things by having those criteria.

Tobias: Do you like to initiate at 5% or 10%? Is that where you’re trying to start them off?