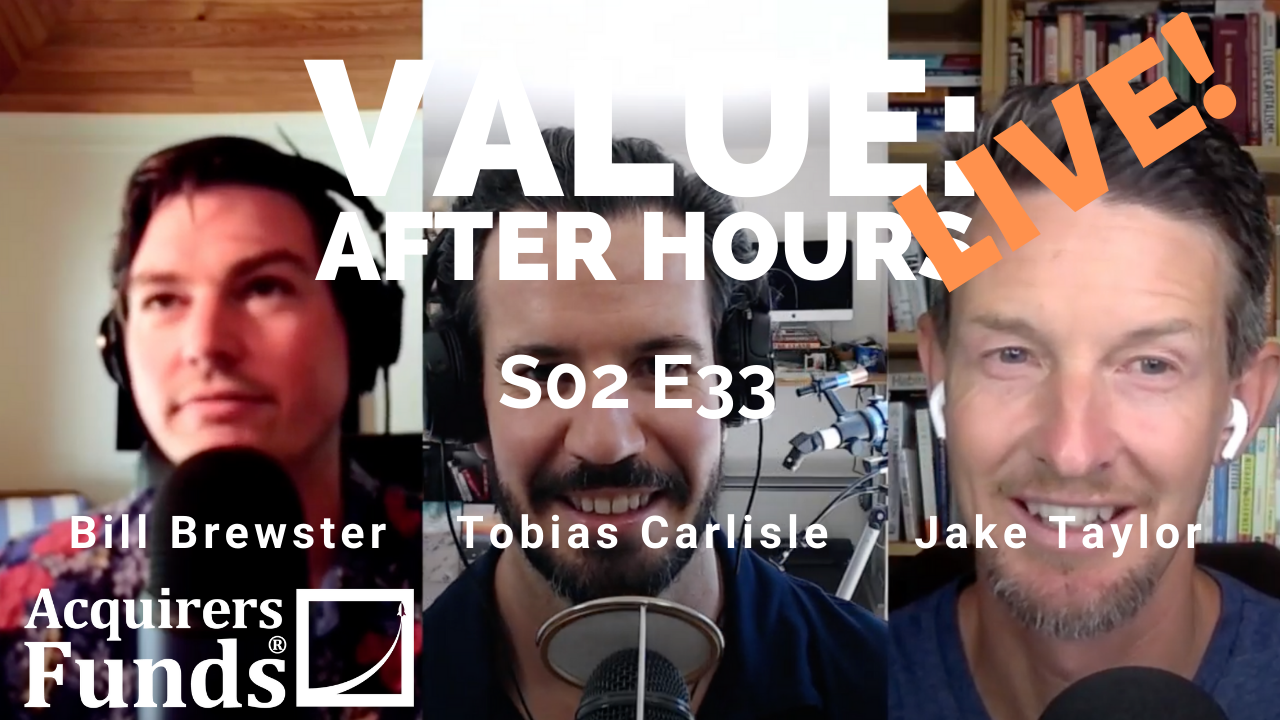 During their recent episode of the VALUE: After Hours Podcast, Taylor, Brewster, and Carlisle discussed Montier’s Reasons (NOT) To Be Cheerful. Here’s an excerpt from the episode:

Jake: So, one of the things that I really like about James Montier is that all of his work is based on the idea that he just doesn’t know necessarily what the future looks like. He talks about Howard Marks has this idea that there are two types of investors in the world. There are the ones that I know, and then there’s the, I don’t know. The I-knows are talking about all the things that are going to happen, all the disruption.

They’re great at parties because they have interesting anecdotes about companies. By the way, valuation is not really primarily a driving factor there. And then, there’s the I-don’t-know investors, and they’re the ones who can’t tell you what the future is going to hold. They just look for a margin of safety and the price that they pay, and that’s how they structure their affairs. Well, I like that Montier tends to be in that ‘I don’t know what things are going to look like’ camp, I find that to be compelling.

He says that the reason that things have gotten so out of whack is that it’s probably some narrative to do with either the Fed or liquidity creation, that’s what everyone’s saying. Then, he breaks that apart. He looks at– that in the valuation, we’re in the 95th percentile right now of Shiller P/E. And that’s probably on an E that’s a little inflated relative to what it’s going to put up over the next year at least. And then, economic growth is in the fourth percentile. He was looking at like a minus 6% print for 2020. So, we have 95th percentile most expensive and 4th percentile worst sort of economy. How do you square those two things other than just purely the narrative that the Fed is going to fix everything?

What’s interesting about this whole narrative idea and how attractive we are to stories, he cites in the footnotes this– they did this mock trial where they took prosecutors, the prosecutors delivered their case in the order of the story of how it played out. And the defense went based on just the order of the witnesses. And they found a 78% of the time in that case, it was found guilty. So, then they reversed it, and they did the prosecutors had to just deliver what the witnesses said, and then the defense got to do the story order, and that dropped it down to 31% guilty rate. All the same facts, but just the presentation of whether it was in a story or not completely changed the outcomes. That’s how hungry we are for stories.

Montier then goes into talking about how– so QE, he’s not sure that is actually something that is good for the market necessarily. He’s trying to say, really all it is, is a maturity transformation which is basically swapping long-term debt for near-term debt. This whole argument that yields are so low on government debt, and therefore everything else should be more expensive, he says, which a lot of people have said, but like, “Okay, what about Japan or Europe where yields have been low? Their equity markets are not completely unhinged from reality.” So, if that is some grand thing in the universe that low rates equal expensive markets, why not Japan and Europe today? Why don’t you guys talk a little bit about this and then I’ll get to the next point.

Tobias: Yeah, that’s something that makes me a little bit nervous that we’ve already run this experiment, at least in one form in Japan, and still below the 1990s stock market high, and that’s a long time. What are we now, 30 years into that drawdown? That doesn’t backtest very well, I can tell you. It looks alright from a value perspective.

Bill: After this, I’m going to have to go close the door because I can hear a critter in my audio. But what I would say is, I guess that I don’t know that I draw the conclusion that things are necessarily insane. I agree that they’re uncomfortable. It’s possible that a lot of these companies that are growing are like the next iteration of the backbone of society. I think you have to at least entertain that possibility. But I’m not comfortable playing in that space. I do think as a lot of these SAS names make up a bigger and bigger component of the index, I don’t know what Japan looked like back then but I don’t think the returns on capital of the businesses were quite as good or that the global scale of those businesses were similar. I do think that there’s important distinctions, but I don’t disagree that there’s a lot of unknowns and– [crosstalk]

Tobias: It was also more expensive.

Bill: All right, I’m going to return– I was trying to keep the door open, so I didn’t sweat through my shirt again.

Bill: So speaking of Japan, people forget that in ’92 and ’93, right as it was bursting, the Bank of Japan had this thing they called price keeping operations where they targeted the Nikkei to try to keep it at a certain level. It obviously failed tremendously. So, everyone who’s like, “Oh, the Fed can just make the market–” The people joke on Twitter like, “Fed, why don’t you tell us what’s the right price for the market?”

Tobias: Give us the close.

Jake: Yeah, give us the close so we can just take it there for you. That historically, when it’s been tried other places, hasn’t worked.

Tobias: That was 30 something years ago. We’ve got much more sophisticated tools now.