Here’s a great article at Morningstar that does a deep dive on the underperformance of value investing over the past twenty years. The article is the first in a three part series. The second part will include Morningstar’s fund analysts providing color on what they have picked up in their conversations with some of the industry’s best-known value managers.

Part three will look at which value strategies have provided investors with the best returns despite this difficult environment, using Morningstar’s database to glean insight into what helped their performance and distinguish them from the pack.

Here’s is an excerpt from Part 1:

September brought relief to long-suffering value fund managers and their investors, as returns on funds that were targeting winners among cheap stocks and turnaround stories outperformed growth-company funds by a wide margin.

While the value-stock rally was dramatic and sudden, it’s only been one month since a long drought ended for value funds.

In many ways the past decade has been a déjà vu of the late 1990s for value investors, with long stretches of significantly weaker performance than could have been had in growth stock funds.

Exactly two decades ago, value investors found themselves left in the dust by growth strategies. Investors and money managers questioned whether a structural change had taken place in the markets, rendering traditional value-investing approaches obsolete. In 1999 and 2000, it got so bad that some prominent value stock-pickers threw in the towel and retired.

Of course, we all know how that bout of growth-strategy outperformance ended: with the collapse of the dot-com bubble and the subsequent decade of strong value funds. And that’s not to say the current market circumstances are the same as the late 1990s; many of the technology stocks that have led the long-running bull market are real companies with real earnings.

In this three-part series, we’ll put Morningstar’s database to work to dig into the current spell of underperformance for value funds. In the first part, we’ll look at the historical return landscape, put recent returns into a long-term perspective, and dive into allocation data to help explain the performance trends.

In the second article, we check in with Morningstar’s fund analysts for colour that they have picked up in their conversations with some of the industry’s best-known value managers.

In part three, we look at which value strategies have provided investors with the best returns despite this difficult environment. We’ll use Morningstar’s database to glean insight into what helped their performance distinguish them from the pack.

In addition, a PDF with historical data on the performance gap between value and growth over different rolling time frames can be accessed by Morningstar Direct and Morningstar Office clients.

Value vs growth by the numbers

We start with a look at annual returns in the following heatmap. For the purposes of this report, the gap between value strategies and growth strategies is presented from the basis of value funds. Therefore, a negative figure reflects a time period in which value’s returns were less than the comparable growth category. Also, we have included both active and passive strategies, open-end funds, exchange-traded funds, and obsolete funds.

Overall, the past three years have been particularly unkind to value strategies across the entire Morningstar Style Box. But going all the way back to the financial crisis, growth strategies have, on balance, had the wind at their backs. The only recent time where value came out of a calendar year solidly ahead of growth was in 2016.

But the scale of value’s underperformance truly becomes clear when viewed through the lens of cumulative returns, starting with three-year returns measured as of 31 December for each year shown.

Prior to the September jump in value strategies, the three-year cumulative return gap would have been the largest since 2000 across all three market-cap spectrums.

Still, the recent performance gap has not been as it was in 1999. But the contrast between the 2019 levels with medians since 1999 is another way to show how extreme the past few years have been.

When looking at five-year returns, it’s even more of a sea of red for value strategies compared with growth. The outperformance of mid-cap value and small-cap value through the end of 2016 appears much more dramatic through this lens.

Over longer time periods, return disparities often get smoothed out. But that hasn’t been the case for value category’s recent period of underperformance when measured by cumulative returns. The good years for the investment approach have rolled off as the 10-year anniversary of the financial crisis has passed, and the gap has grown to historically wide levels.

Investors don’t have to dig deeply to see the disparity between value and growth. For example, among the top-50 best-performing stocks in the S&P 500 over the past three years, only two – NRG Energy (NRG) and Progressive (PGR) – are classified by Morningstar as value stocks.

But perhaps the easiest way to see the headwinds facing value managers is to look at the sectors where their portfolios have been overweight or underweight when compared with growth funds.

In the following chart we look back three years ago to average sector allocation for holdings of large-growth and -value funds, and as a comparison point, the universe of large company stocks as measured by the Morningstar US Large-Cap Index. 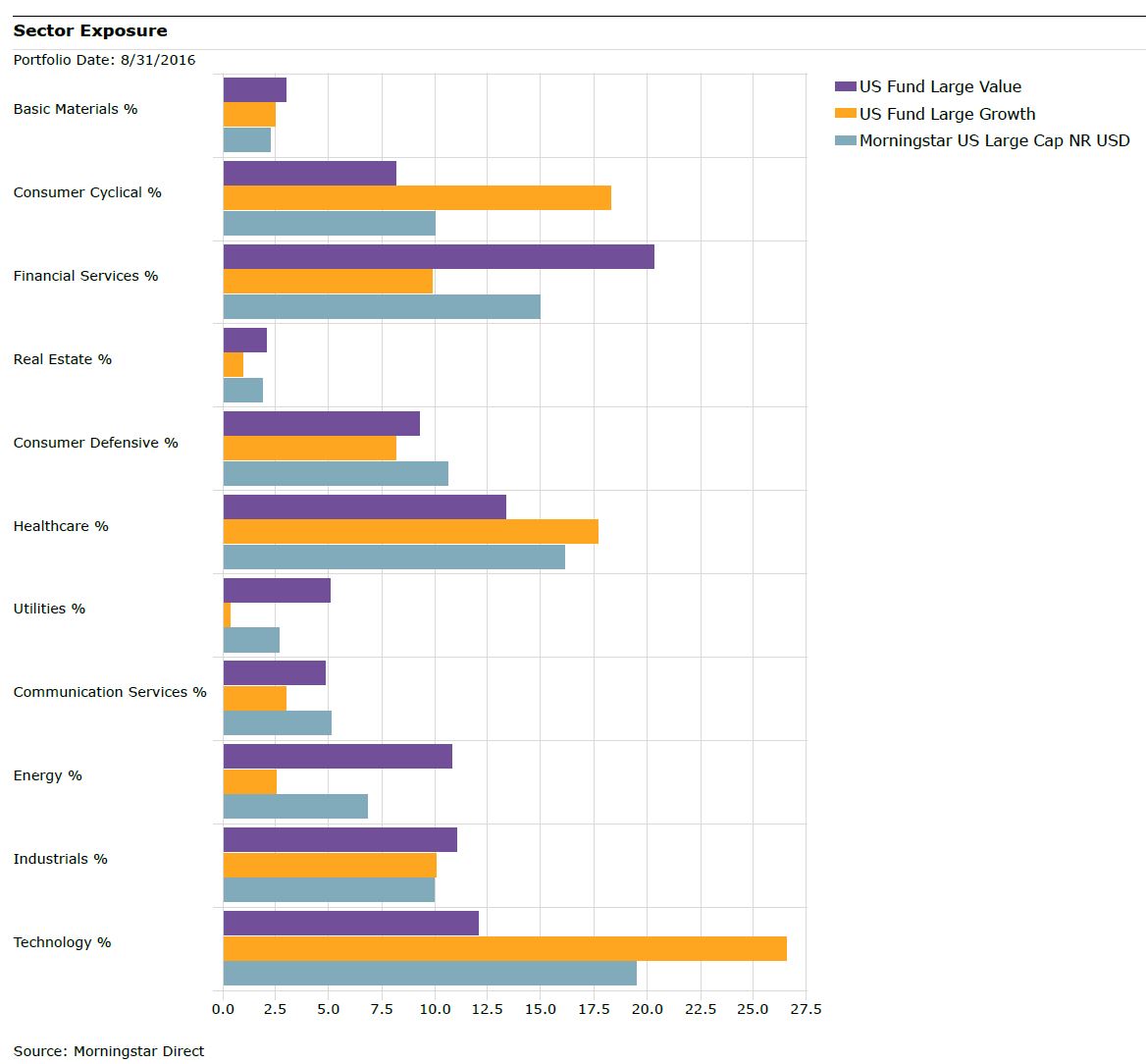 Large growth, true to its reputation, clocked in with a significant weighting in technology stocks of almost 27 per cent. Consumer cyclicals ranked second at an average of roughly 18 per cent.

Large-value funds, meanwhile, on average, counted financials as their largest weighting at 20 per cent. The weighting toward energy stocks, while only the fifth highest, would prove to be a significant albatross when it came to returns.

The following charts shows how sector returns played out over the past three years among all large-company stocks, as measured by the Morningstar Large-Cap Stock Index. 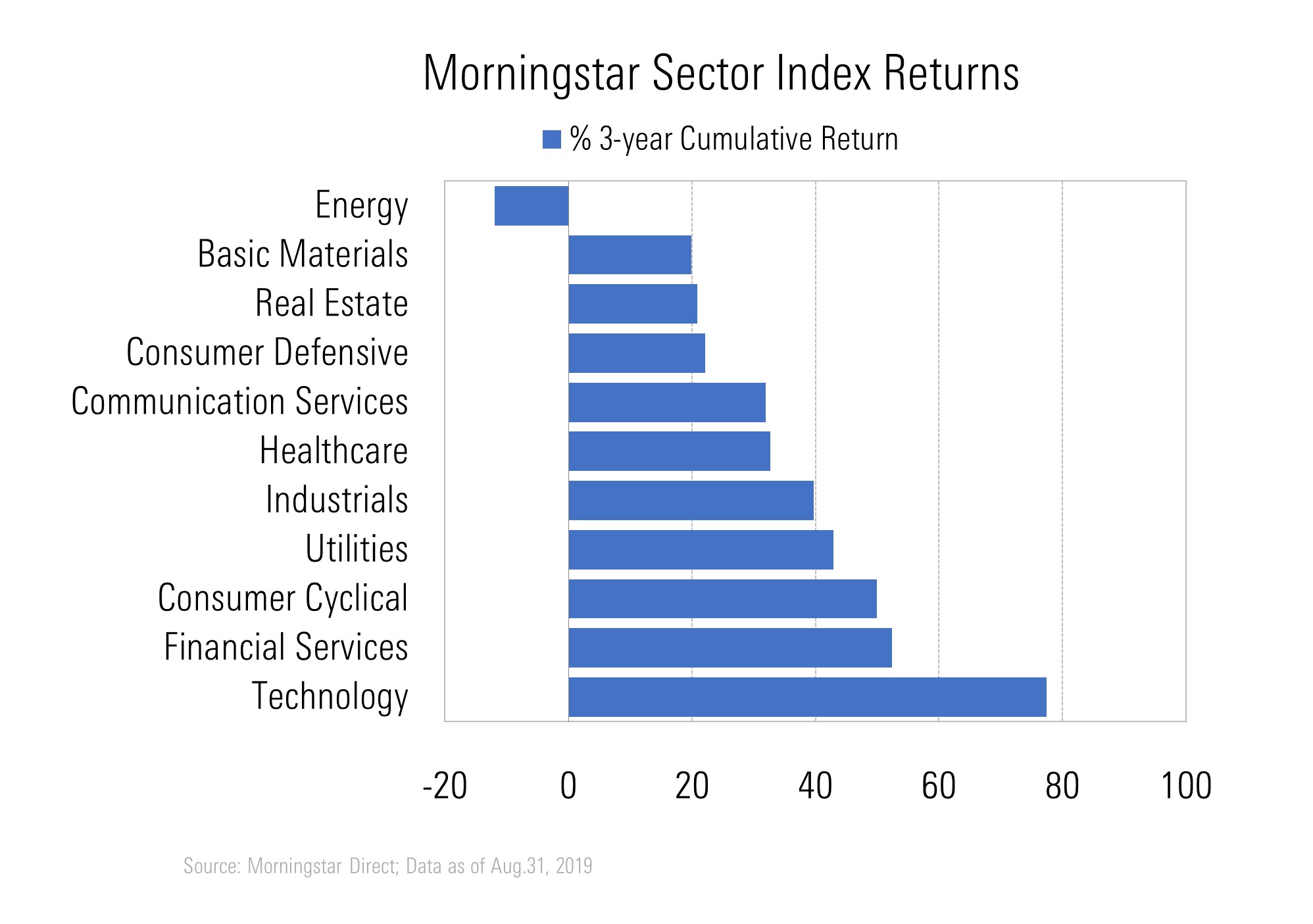 It turned out that the big bets on financials, on balance, was a good place to be over the past three years, with 52.4 per cent on a total-return basis as measured by the Morningstar US Financial Services Index. But energy stocks, weighed down by low oil prices, lost 12 per cent. Meanwhile, technology, led by stocks such as Adobe (ADBE) and Nvidia (NVDA), returned more than 77 per cent.

For investors in small-value funds, it hasn’t felt much like the longest bull market for stocks in history. The category’s three cumulative returns through the end of August was just 16.1 per cent, 11 percentage points behind small growth.

Equity-attribution analysis allows users to compare a portfolio’s performance to that of a benchmark. Comparisons can be done by sector classifications, country/region classifications, or custom groupings. In this case we created an equal-weighted portfolio of all small-cap value funds with three-year track records. For a benchmark we created a basket of all small-cap growth funds with a three-year track record.

In the following analysis we show the difference in sector weightings between value and growth, with a positive number reflecting a sector where small-value funds had a heavier weighting than small growth. As before, we present this data from the vantage point of the value portfolio, so a negative number reflects a smaller weighting than in the small-growth portfolio. (This data is calculated using month-end portfolios to calculate returns, so it does not account for intramonth trading.)

Similar to the large-cap index profile, financials were a significant overweight for small-value stocks relative to small growth, at 25.7 to 5 per cent, respectively. But healthcare outstripped technology as the largest relative underweight, with less than 5 per cent of the small-value fund portfolio in that category, compared with nearly 19 per cent for small growth.

We’ll also take a look at the industry-level exposures of small-value and small-growth funds and what that means for the drag on performance for small value.

Within the technology sector, we see that software and services – names such as Verint Systems (VRNT) and KBR (KBR) for small value and Alteryx (AYX) and Everbridge (EVBG) for small growth – was the industry with the largest allocation underweight for value. In our portfolio of small-value funds, this led to a significant performance give-up of 54 percentage points on holdings in this industry.

Banks top the list for industry overweights for small value. Holdings here included Associated Banc-Corp (ASB) and Wintrust Financial Corp (WTFC) for small value. But as with materials and energy holdings, this didn’t help in narrowing the performance gap with growth funds. Among insurance companies and real estate, small-value picks lagged far behind those in growth funds.

You can read the remainder of this article at Morningstar here: Morningstar, Value investing: A deep dive into performance.