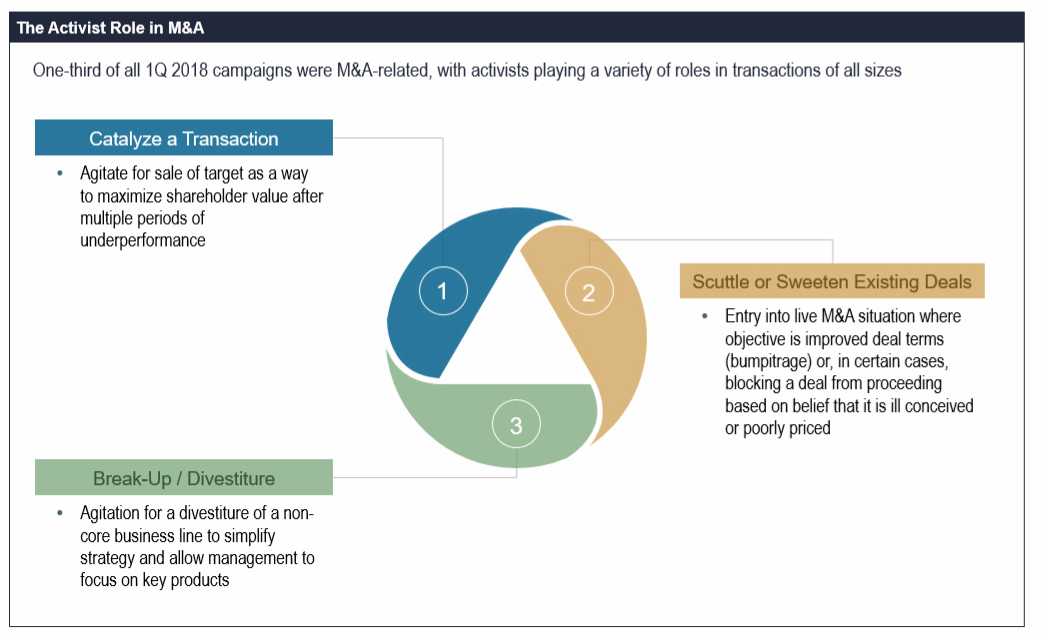 “Last year more than $62bn was deployed by activist investors on their campaigns, double the amount spent in 2016. And activism is changing. In the US, the number of proxy fights has fallen to a five year low. So why are campaigns becoming less confrontational?”

Last week the WSJ reported that, “activists are launching campaigns at a record pace as the rise in passive investing pressures fund managers to find new ways to beat the market and letting the rabble-rousing investors into boardrooms becomes less taboo.”

And, earlier this year Lazards also released its Review of Shareholder Activism for Q1 2018. Their report shows that activist activity reached new heights in 1Q 2018 both in terms of capital deployed and campaigns initiated:

• Starboard Value was the leading activist in forcing Board turnover, with 41 seats targeted in 1Q 2018

Activism in Europe continued to be robust in 1Q 2018, accounting for ~29% of capital deployed and ~23% of campaigns initiated:

− The $7.2bn of capital deployed in new campaigns against European targets was ahead of the prior year period, suggesting the possibility that 2018 may surpass the 2017 record

− Elliott remained the most active global player, and the UK was by far the most targeted country

− Increasing importance has driven these firms to materially expand their ESG efforts, with BlackRock pledging to double its stewardship team’s headcount and Vanguard establishing a European stewardship presence

− ESG issues have attracted significant attention by passive investors, who are pushing companies to serve a broader social purpose in their communities

• Active managers and activists have also begun pushing for ESG initiatives, as seen in ValueAct’s campaign at AES

M&A continued to be a core focus, with activists pushing for sales processes, intervening in announced transactions and forcing break-ups and divestitures:

− Interplay between activists and M&A is having global implications, with examples including Darwin Deason and Carl Icahn calling on Fuji and Xerox to terminate their joint venture and Sachem Head pushing UK-based Whitbread to separate its Costa Coffee business

You can read the WSJ article titled Activist Investors Turn Up Heat in Drive for Returns here.

You can read Lazards Full Review of Shareholder Activism for Q1 2018 here.