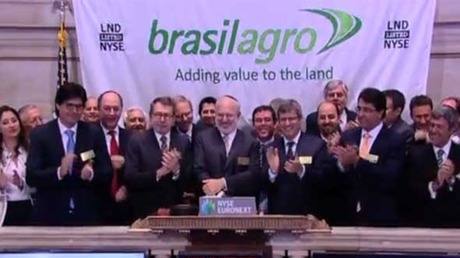 OK, now let’s take a look at this month’s (March 2016) second pick that I’m adding to my portfolio.

Next in The All Investable Stock Screener this month is Brasilagro Cia Brasileira De Propriedades Agricolas (NYSE: LND). As you can see from the chart below, Brasilagro’s share price has done ok in the past 12 months, up nearly 13% in that time:

How does it look in the Screener?

Let’s take a closer look at Brasilagro in the “All Investable Stock Screener”.

The company currently has a market cap of $181 million, while its Enterprise Value (EV) is $151 million.

The reason for this EV is because the company has an excess of $30 million of cash and cash equivalents once you subtract its total debt. As an acquirer, we subtract this $30 million from the current market capitalisation of $181 million, which leaves us with a total EV of $151 million.

The company’s operating earnings, which are taken from the top of the income statement, are $55 million.

In other words, we’re paying $181 million for a company with an EV of $151 million, that is returning operating earnings of $55 million on that $151 Million.

Brasilagro is a company based in São Paulo, Brazil.

The company focuses on acquisition, development and exploitation of agricultural land that it believes possesses significant potential for cash flow generation and value appreciation. The company seeks to transform this land through cultivation of high value-added crops and periodically sell the newly developed land in order to generate profits.

What’s the problem for Brasilagro?

At face value, there doesn’t appear to be much wrong with Brasilagro. In the company’s latest 2015 annual report, which ended June 2015,  it stated revenue of US$45 million, a 32% increase from the previous corresponding period (pcp).

The company also reported net profit of US$46 million, which was also up significantly on the pcp, due largely to a ‘Gain on Sale of Farms’ of US$50 million.

Brasilagro has done an awesome job of converting land into profits.

Here’s a typical example from the latest annual report.

It’s to do with the Cremaq Farm transaction:

On October 2006, the Cremaq farm was acquired by its subsidiary Imobiliária Cremaq with a total area of 32,702 hectares for R$42.3 million.

At the time of acquisition, 3,000 hectares were cultivated with grain production. Since the acquisition the company had invested R$26.0 million (net of accumulated depreciation) in infrastructure to support the production process, including the construction of a silo at a total cost of R$8.4 million with capacity to store 72,000 tons of grains (such silos are capitalized under property, plant and equipment).

So, where’s the problem?

This is a typical example of a good company affected by its geographical location.

Inflation, unemployment and interest rates have increased more recently and the Brazilian Real has weakened significantly in comparison to the U.S. dollar.

In addition to the recent economic crisis, protests, strikes and corruption scandals, including the “Lava Jato” investigation, has led to a fall in confidence and a political crisis.

The economic and political crisis have resulted in the downgrading of the country’s long-term credit rating from Standard & Poor’s rating agency from BBB + to BBB-, placing Brazil back to speculative investment grade level (“junk”). Moody’s downgraded Brazil from “Baa2” to “Baa3” and changed the negative perspective to stable, while Fitch Ratings downgraded Brazil from BBB to BBB- and changed the perspective from stable to negative. Both Moody’s and Fitch still consider Brazil investment grade.

Another important issue surrounding the company is simply that it has such low trading volumes. For the entire month of February 2016, the company only traded 34,300 stocks. While this is great for individual investors, it makes it difficult for institutional investors to get involved.

So, with all that said, now let’s take a look at their numbers:

Based on all of these numbers, the company certainly does look cheap.

How safe is the business?

To figure out the stability of the company, we use a number of key metrics.

Its Piotroski F-Score is 8 – indicating the company’s financial situation is stable.

Its Beneish M-Score is -1.67, indicating that it may be an accounting manipulator.

Details of the trade:

I have $300 Australian Dollars to allocate to each stock in my portfolio.

The AUD/USD Exchange Rate this month is USD$0.75.

Therefore, I have around USD$226 to allocate to the company.