Nevsun Resources Limited (NSU), an African gold, copper, zinc, and silver miner, trades on a sub-2 acquirer’s multiple and is the cheapest stock the All Investable Screen.  It’s got an $820 million market cap with a $530 million enterprise value and trailing twelve-month operating earnings of $269 million (AM = 1.98), which is cheap, cheap. There are a lot of reasons to like it. David Desjardins likes it too. Here’s his reasoning in summary:

[T]he company has a top notch balance sheet. With current assets of $677 million and current liabilities of $73 million, the firm has a working capital of $604 million. Likewise, it has a huge current ratio of 9. It is also extremely interesting to calculate the net current asset value of the firm. This metric is calculated by subtracting total liabilities from current assets.

With total liabilities of $360 million, Nevsun has a net current asset value of $317 million. Based on a market capitalization of $900 million, it is possible to conclude that the firm is truly undervalued. I want to mention that the current assets are mainly composed of cash and cash equivalents. In fact, the corporation has $514 million in cash.

Cheap on a enterprise multiple basis:

On the other hand, the most interesting part of the company is its enterprise value to EBITDA ratio. With an enterprise value of $716 million and a trailing twelve months’ EBITDA of $355 million, Nevsun resources has a EV/EBITDA ratio of only 2.01. This is the lowest in the entire industry. Every serious investor should be interested in this great opportunity. 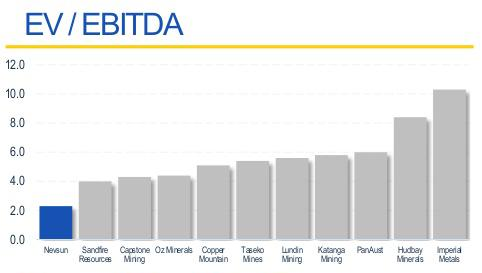 Few months ago, the firm revealed that it recently received inquiries from various parties about a potential takeover transaction. At the same time, Bloomberg reported that a Qatar equity fund called QKR Corp. was eying a US$1 billion bid. With more than $500 million in cash, the potential takeover would largely pay for itself. Due to the downtrend in the commodity prices, the industry is clearly in a consolidation process. On the other hand, absolutely no official offer came along.

And it’s about to start mining some minerals in near-term deficit.

Finally, the company has a huge upside potential with the zinc expansion project. In 2016, the flotation capacity will be expanded to produce zinc concentrates. A supply deficit in the zinc market is expected as soon as 2016. It is mainly due to the closure of large zinc mines. This factor will reduce the supply by approximately 10%.