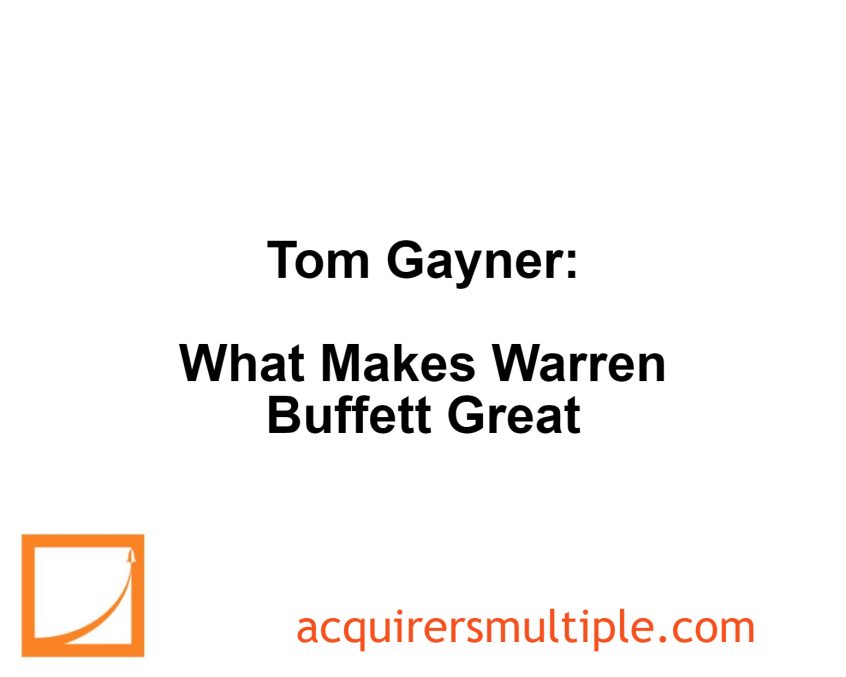 In this interview with The World According To Boyar Podcast, Tom Gayner discusses what makes Warren Buffett great, having spent time with him as a board member of The Washington Post. Here’s an excerpt from the interview:

Gayner: I’ve been very fortunate in that I started going to Omaha back in 1991. That was the first year I went to the Berkshire annual report. At that particular time, there were probably only about 700 people that attended that meeting. Buffett was not the celebrity then that he is now. You literally could go up to him at the annual meeting and introduce yourself and chat for a little bit. Actually, I did that back in 1991 and that’s good fortune to at least having some social interchange with him since that time.

Now, I was super lucky in that I was asked to serve on the board of the Washington Post company. I think that was back in 2007 or so. At that time Buffett was on the board so we were fellow directors of the Washington Post company for a number of years until he left that board. I got to have something of a professional relationship with him through that time and five board meetings a year and five board dinners and that sort of thing. I’ve studied him, I’ve read everything he’s written. I’ve had the good fortune of being able to chat with him directly. He’s been a spectacular role model and mentor so I was delighted and grateful when they showed up as owners.

Boyar: You were on the board of the Washington Post with him and you mentioned you got to read all of his letters, which everyone else who’s in the investing world has the opportunity to do. You got a first-hand view of him in action. There are things that people who haven’t read of all his letters in his interviews would be surprised about him or something that you can tell us about him that you found particularly interesting in terms of how he goes about business and how he prepares et cetera?

Gayner: One is, what you see is what you get. Buffett is almost super human in his dedication to being a great investor, a great leader, a great manager, a great historian, a great student of the game. He has been so good that sometimes people think, oh, there must be a magic trick involved or some freak of nature or some secret formula, whatnot. No, I think that’s what you get when you combine a pretty high IQ with a phenomenal work ethic and phenomenal concentration and surrounding himself with phenomenal people.

Whether that’s Charlie Munger, Ajit Jain, Greg Abel, Ron Olson, all those kinds of people that would be in his–, just on and on and on. If you think about, and he talks about the concept of 20 punches, 20 great ideas. We’ll take his top 20 people that he would’ve spent the most time with over the last 70 years and line them up and think about the collective IQ and talent and wisdom of whatever people he spends time with. Just an undiluted and unfiltered way to be extraordinarily good at this, and he’s done it for a long, long period of time, which is where the compounding really kicks in.

One thing I would urge people to do when you’re studying them, don’t overthink it. Don’t think there’s something there that isn’t. Look at what’s obvious and take things for what they are and try doing it for 30 or 40 or 50 years yourself and see how it works out. I suspect that it will work out relatively well. Maybe not as well as it did for him, but I think that would be fundamentally good way of trying to approach the investment business.