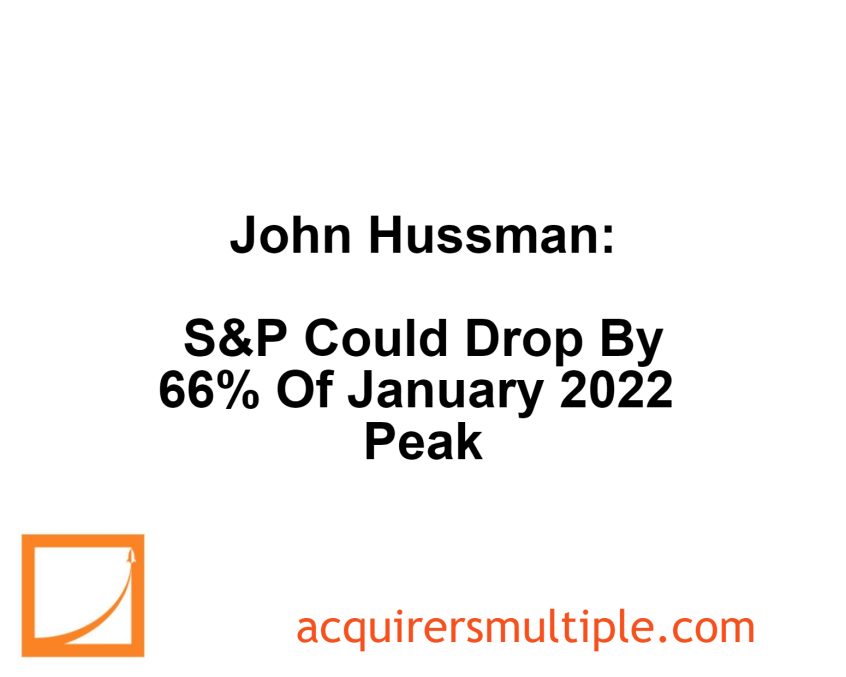 In his recent market commentary titled – Pushing Your Luck, John Hussman explains why the S&P500 could drop by two thirds of its January 2022 peak. Here’s an excerpt from the commentary:

Unfortunately, the rewarding gap between underlying risk and inevitable outcomes can encourage people to persist in reckless behavior. In 2007, the tragic results of that behavior were already baked in the cake. Only the timing was uncertain. As I wrote at the time, one can go some distance in a mine field without anything blowing up – it’s just that the overall odds aren’t good.

The distortions in the financial markets are different today than they were in 2007. This time around, the Fed starved investors of yield for a decade, and much more aggressively. Looking in the rear-view mirror, the effects of relentless yield-seeking speculation look glorious. But the unwind may be breathtaking.

The distortions in the stock market are far beyond those of 2007, more closely resembling 1929 and 2000. That remains true, even though the bubble peaked a year ago. Since then, the S&P 500 has lost a modest -15.7%, including dividends.

I continue to expect that the unwinding of this bubble will drive the S&P 500 to just one-third of the level it set at its January 2022 peak. I know – that seems preposterous. That’s why I present statements like that with data, as I did before the global financial crisis in 2007, and as I did when I projected an 83% loss in technology stocks in March 2000. Preposterous, yet also unfortunately correct.

The tendency of negative estimated risk-premiums to resolve into deep market drawdowns over the next 30-36 months creates risk. The reliance of investors on “forward earnings” multiples that embed record profit margins creates risk. The assumption that inflation will come down in a rapid and linear fashion, despite historical persistence of inflation, creates risk.

If our measures of market internals were to improve, we could at least infer that investors had shifted toward a speculative mindset, rather than one inclined toward risk-aversion. Presently, we observe a great deal of potential risk in an overvalued market where investors are also inclined to care about that risk.

Those conditions will change. Until then, we’re comfortably buckled up.