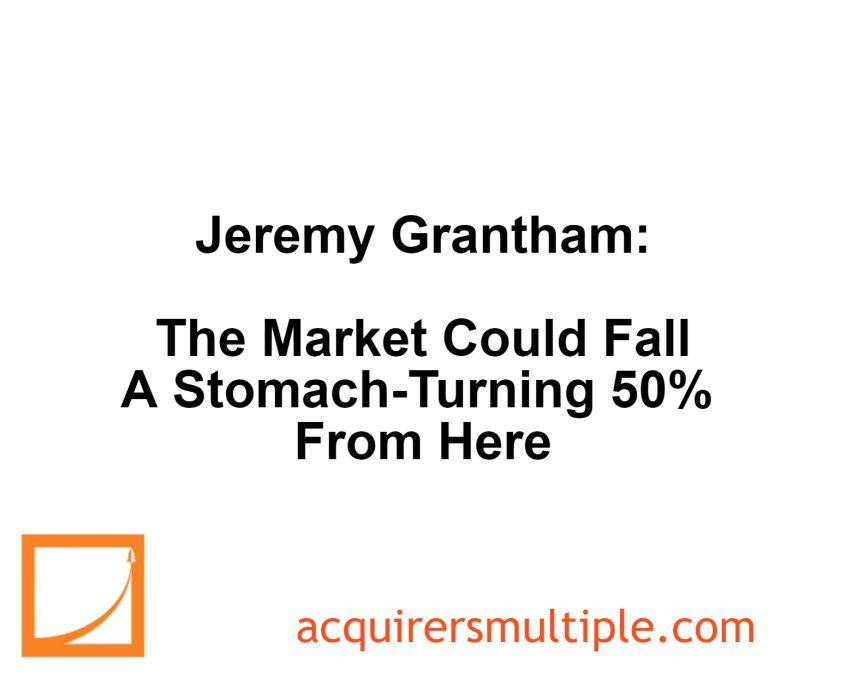 In his latest viewpoint titled – After A Timeout, Back To The Meat Grinder, Jeremy Grantham says the market could fall a stomach-turning 50% from here. Here’s an excerpt from the viewpoint:

My calculations of trendline value of the S&P 500, adjusted upwards for trendline growth and for expected inflation, is about 3200 by the end of 2023. I believe it is likely (3 to 1) to reach that trend and spend at least some time below it this year or next. Not the end of the world but compared to the Goldilocks pattern of the last 20 years, pretty brutal. And several other strategists now have similar numbers.

A modest overrun past 3200 would take this entire decline to, say, 45% to 50%, a little less bad than the usual decline of 50% or more from previous similarly extreme levels.

But this is just my guess of the most likely outcome. The real risk from here is in the unusually wide range of possibilities around this central point. I would suggest wide and asymmetric error bars around any such forecast.

Regrettably there are more downside potentials than upside. In the worst case, if something does break and the world falls into a severe recession, the market could fall a stomach-turning 50% from here.

At best there is likely to be at least a further modest decline, which by no means balances the risks. Even the direst case of a 50% decline from here would leave us at just under 2000 on the S&P, or about 37% cheap.

To put this in perspective, it would still be a far smaller percent deviation from trendline value than the overpricing we had at the end of 2021 of over 70%. So you shouldn’t be tempted to think it absolutely cannot happen. (For an example of a real nightmare, in 1974 the S&P troughed at below 7 times earnings!)

You can read the entire viewpoint here:

Jeremy Grantham – After A Timeout, Back To The Meat Grinder