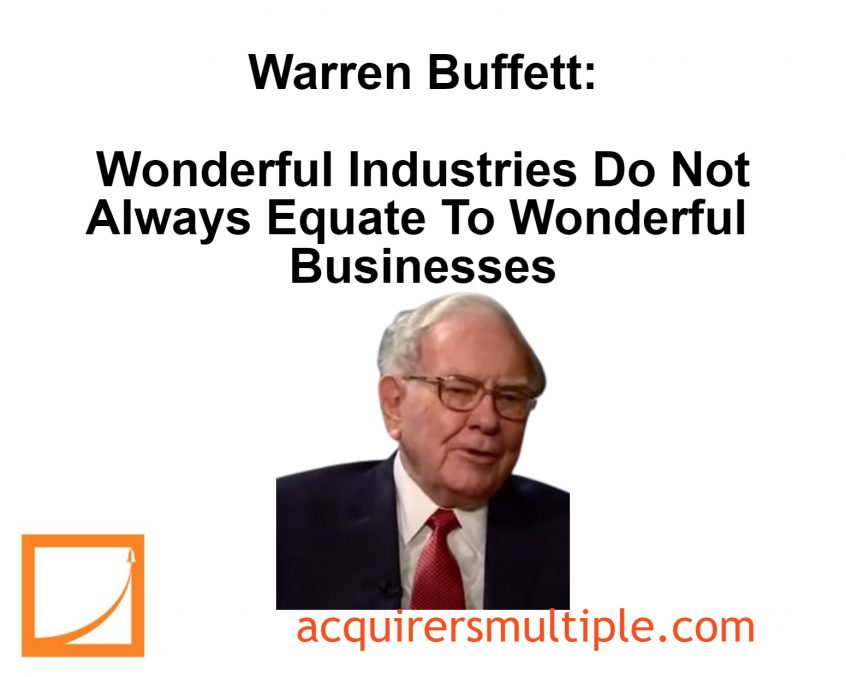 During the 1999 Berkshire Hathaway Annual Meeting, Warren Buffett explained why wonderful industries do not always equate to wonderful businesses. Here’s an excerpt from the meeting:

WARREN BUFFETT: There’s a lot of difference between making money and spotting a wonderful industry. You know, the two most important industries in the first half of this century in the United States — in the world, probably — were the auto industry and the airplane industry.

But very, very few people got rich by being — by riding the back of that auto industry. And probably even fewer got rich by participating in the airline industry over that time.

I mean, millions of people are flying around every day. But the number of people who’ve made money carrying them around is very limited.

So you do not want to necessarily equate the prospects of growth for an industry with the prospects for growth in your own net worth by participating in it.

CHARLIE MUNGER: Well, it reminds me of a time in World War II when — where these two aircraft officers I knew, and they didn’t have anything to do at the time. And some general came in to visit. And he said to one of them, he says, “Lieutenant Jones, what do you do?” He says, “I don’t do anything.”

That’s been my contribution on communications investments. (Laughter and applause)

WARREN BUFFETT: You can address me as Lieutenant Jones for the rest of the meeting. (Laughter)