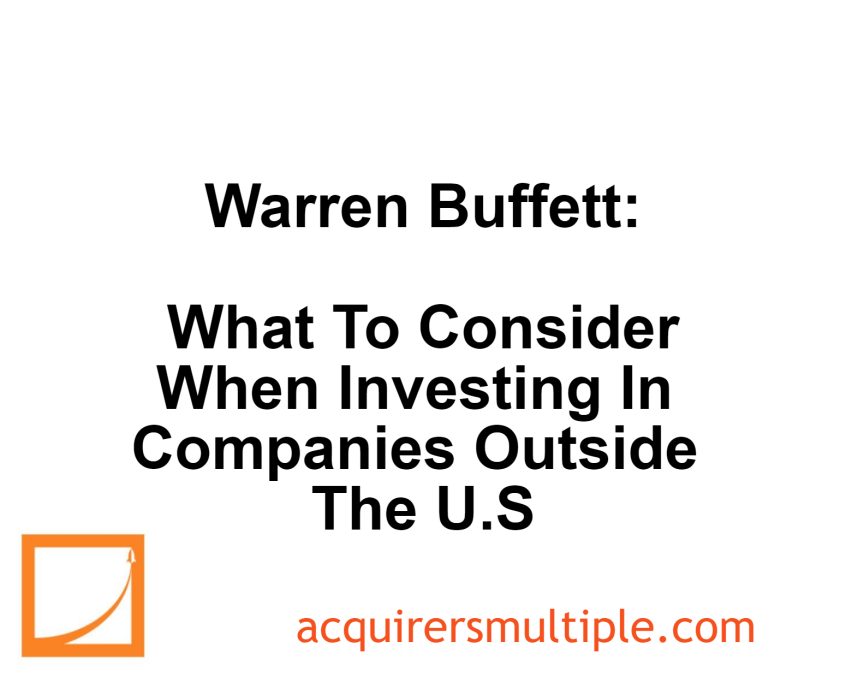 During the 2011 Berkshire Hathaway Annual Meeting, Warren Buffett discussed what he considers when investing in companies outside the U.S. Here’s an excerpt from the meeting:

WARREN BUFFETT: We follow the same principles, but we recognize that we know less about tax laws, about customs, about attitudes towards shareholders, any time we get outside the United States, than we know in the United States. Now, to varying degrees, we weigh in that uncertainty.

At the time I bought PetroChina stock, which, I don’t know, was probably 2003 or thereabouts, it was extraordinarily cheap, in relation to any calculation of reserves or refining capacity or cash flow or you name it. And at the same time, Yukos in Russia was similarly very, very cheap, and they were both huge.

For one thing, they said they were going to pay out 45 percent of — as I remember — 45 percent of their earnings in dividends. That’s more than any company — oil company — in the United States would tell me.

So I regarded it as a plus and an indication of intent that I thought would be fulfilled, and it has been fulfilled.

So we do make allowances for our lack of understanding, as well as we might in the United States, various key factors.

But the basic principles of trying to value the business, trying to find managements in which we have confidence, in both their ability and integrity, and then finding attractive purchase price, those principles apply wherever in the world we would be investing.

CHARLIE MUNGER: Well, we make so few investments in China that trying to draw general lessons from us would be hard.

It reminds me of the time a professor went west for the summer and came back to his faculty and he said, “I’ve learned that Indians always walk single file.” And they said, “How did you figure that out?” And he said, “I saw one and he did.” (Laughter)

WARREN BUFFETT: How did we get from there to China? (Laughter)

CHARLIE MUNGER: Well, we only had a couple of things in China. They’re like the one Indian. You can’t draw general lessons from them.

I mean, obviously, if we had a call on some — that could be a significant size investment because we — it just doesn’t make any sense for us to look at things we can just put a couple of hundred million dollars in — but we, you know, I love the idea of looking at various ideas.

I mean, I find it a fascinating game to hear about companies or businesses that are new to me.

And the problem now is that the universe has gotten much smaller because of our size. But we welcome a call from a lot of countries.

There’s some countries that are just too small. They’re not going to have businesses that could move the needle at a place like Berkshire, and so those are off the list, but —

CHARLIE MUNGER: China has at least one private company that makes over $3 billion a year after taxes. There’s some big things out there.

WARREN BUFFETT: I’ll get the name from him later, but I don’t want you to hear. (Laughter)