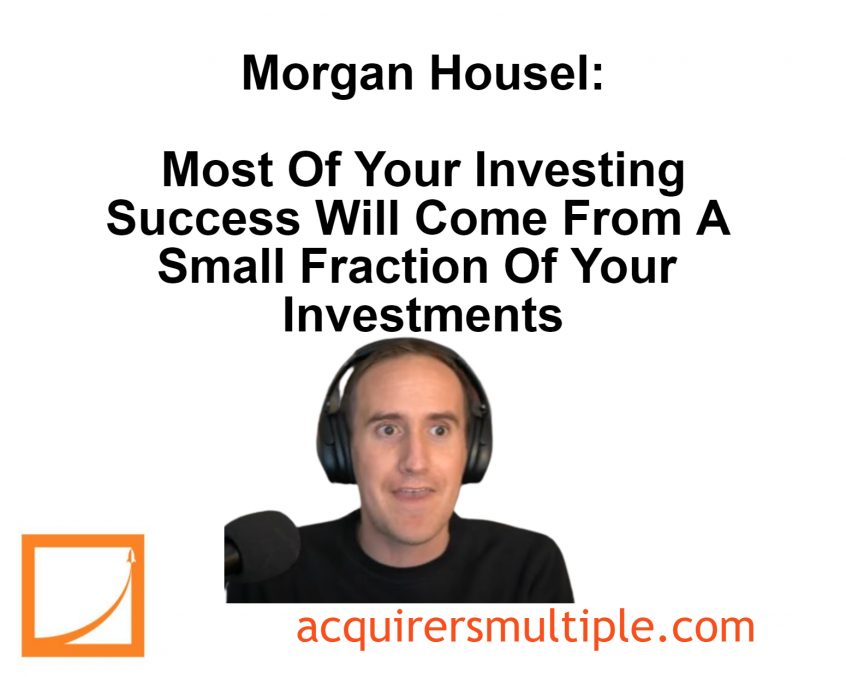 In his recent interview with The Long View, Morgan Housel explained why most of your investing success will come from a small fraction of your investments. Here’s an excerpt from the interview:

Housel: And then, Ben Graham, one of the most successful investors of all time. Not only is he Warren Buffett’s mentor, but a very successful value investor himself. It’s so interesting.

The last chapter of The Intelligent Investor, which I’m sure virtually no one has read. It’s a very long book. No one gets to the last chapter. It’s actually the postscript in this book. He talks about this investor who broke all of his rules.

All of the rules that he laid out, he broke all the rules, and he owes all of his success to one investment. And if you remove this one investment from that investor’s career performance, if you just take this one stock out, the career performance drops to average. The one stock that he’s talking about is GEICO and the investor is himself, Ben Graham.

If you look at Ben Graham’s lifetime performance, if you remove one investment that he made in GEICO, his performance is average. And by the way, buying GEICO broke every single rule that Ben Graham put in his own book.

And so, that is so fascinating. He writes this incredible book that all of us have read and so many people consider the Bible of investing. And the only reason that Ben Graham was successful was because he ignored all of that advice and did this thing that he never should have done.

The rules that he broke was he put a huge percentage of his net worth into GEICO and at the time the valuation that it was at, he broke all the rules that Ben Graham laid out in his book, but that’s the only reason he’s successful.

And that too is so humbling. And it’s not to say that there’s nothing to learn from The Intelligent Investor or the rules that he laid out, of course there are. There are some great lessons in there.

But you look at what made these people successful and, by and large, it’s a tiny fraction of the actions that they took, and it’s the same thing for Amazon, and Apple, and Google.

All these companies derive the huge majority of their success from a tiny fraction of the products that they experimented with. Amazon has experimented with every single product imaginable from phones—they tried to build everything—the whole company’s success is two products: it’s Prime and AWS.

Those are the two products that completely made Amazon what it is. Apple too has tried so many different products over the years, but virtually all of the company’s success is iPhone, that’s it. That’s what made it. It’s this one product that they made. So, I think whenever you view either business or investing success, it’s so easy to underestimate how much success is owed to 1% of the actions that you take.