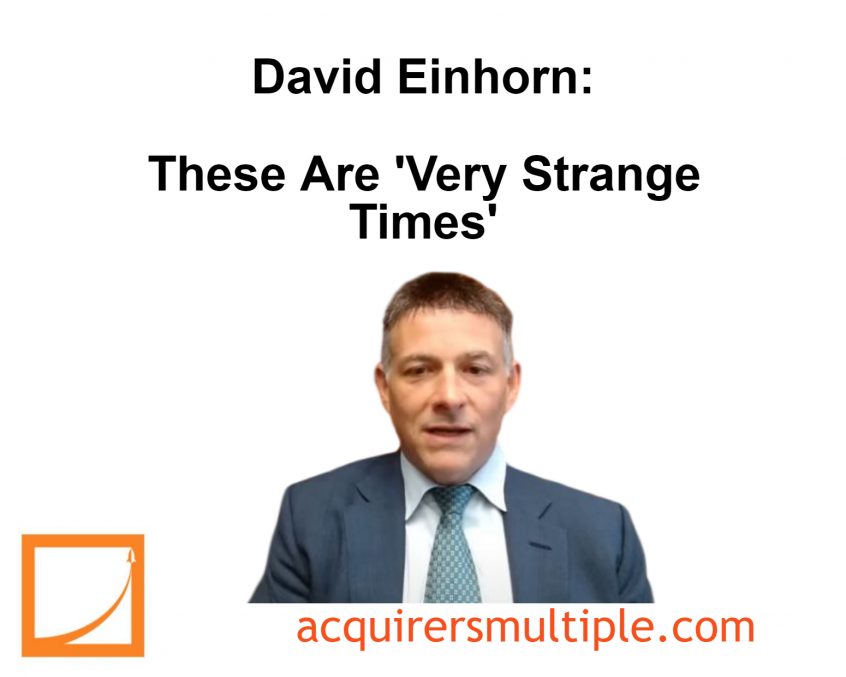 In his latest Q3 2022 Letter, David Einhorn explains why these are ‘Very Strange Times’. Here’s an excerpt from the letter:

It isn’t entirely clear whether we are, or are not, in a recession. The first two quarters of 2022 had negative GDP growth, which usually marks a recession. Even so, the politicians are debating the definition of a recession, which isn’t surprising, as we appear to be in a post-factual world.

Whether we are in a recession or not, it’s clear that the Fed wants to deflate the stock market. After Chair Powell’s speech in Jackson Hole, one Fed governor said he “was actually happy” with the stock market’s negative reaction.

It seems the Fed believes that inflation is caused by a difference between supply and demand. If this were the case, there would be two possible approaches: try to increase supply or to try to decrease demand. To increase supply, we would need productive investment.

This would add to wealth and improve living standards. To decrease demand, we would reduce income and wealth, thereby lowering living standards. Our policy makers, who have delegated inflation fighting to the Fed, have chosen the latter.

There is no discussion about how to increase supply. In fact, higher interest rates reduce investment, and therefore, supply. The most glaring area might be in housing, where higher rates lead to reduced supply despite widespread shortage.

All told, this policy might make inflation worse rather than better. As we wrote a decade ago in our Jelly Donut monetary policy thesis, the relationship between interest rates and the economy is non-linear; the Fed does not appear to understand this.

Of course, we believe that inflation is only partly caused by a difference between supply and demand. It’s also caused by the creation of money. We just went through a period where we had aggressive fiscal policy financed by newly created money. Unfortunately, fiscal reform is not on the table at this point. Chair Powell has determined that “price stability is the responsibility of the Federal Reserve.”

Implicitly, fiscal policy does not need to help the inflation fight. In fact, it appears to be used to offset the monetary policy, as there doesn’t seem to be any objection to additional spending that effectively subsidizes the inflation. We question whether the Fed will succeed.

Actually, so does the Fed.

At the same Jackson Hole event where Chair Powell spoke, the Chicago Fed presented a paper that argued, “The fact that approximately half of the recent increase in inflation has fiscal roots poses some specific challenges for policy makers today. Not only fiscal inflation tends to be highly persistent but it also requires a different policy response.”

In any case, we aren’t making policy. As long as official policy is to make the stock market go down, so that people are less wealthy, so that they buy fewer things, so that prices stop going up, all while doing nothing about fiscal policy, we believe the correct posture is to be bearish on stocks and bullish on inflation.

To that end, we have reduced our gross long exposure substantially this year. Further, our investment in TWTR is inherently short-term. As such, we expect to have additional dry powder after exiting that investment upon resolution (and we hope completion) of its sale.