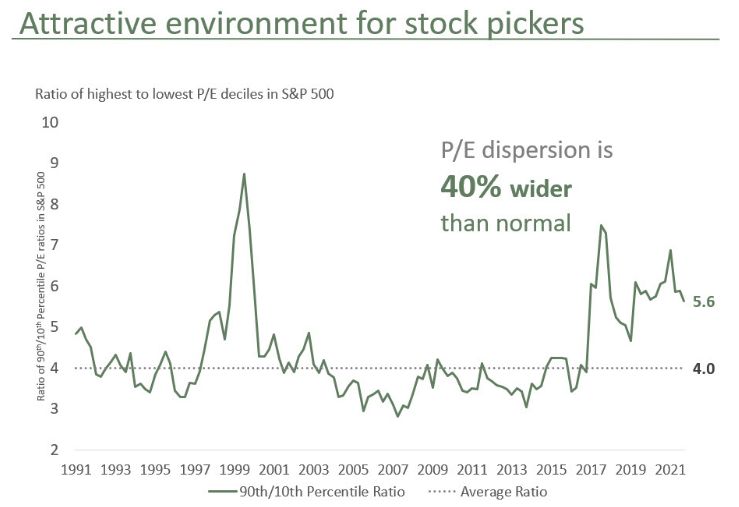 In his latest Q3 2022 Market Commentary, Bill Nygren explained why this is a stock-pickers market. Here’s an excerpt from the commentary:

What would define a good opportunity for picking stocks? If success means selecting stocks that increase more than the average stock, then a target-rich environment would be when there is a wide range in how stocks are being priced, meaning more stocks than usual are selling at extremely high and extremely low valuations.

The narrower the distribution, the harder it is to differentiate returns via stock selection. One way to measure the opportunity is to look at the distribution of P/E ratios. (Price-to-intrinsic value would be more precise, but that is a hard metric to compute and nearly impossible to reconstruct historically.)

Today the 50th highest P/E is above normal at 50 times, and the 50th lowest is below normal, under nine times, for a ratio of 5.6. So, the P/E dispersion is about 40% wider than normal. As has often been the case, unusually high volatility leads to a high spread in valuations, which has been—and we believe will be—a good environment to add value via stock picking.

I’ve said the same thing in previous quarterlies when the ratio was even higher, but because of a couple of poor-performing stocks, we haven’t added the value we expected to as this ratio began to decline. Despite that, we still believe that today presents a better than average opportunity set. We expect not only good performance from the market, but better performance for the stocks we identify as attractively priced.

You can read the entire market commentary here: