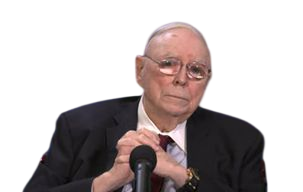 During the 2011 Berkshire Hathaway Annual Meeting, Charlie Munger explained why he would take an axe to the financial sector. Here’s an excerpt from the meeting:

CHARLIE MUNGER: Yeah, the one place that I feel we’re making a huge mistake is not learning enough from the big mess that came from wretched excess in our financial system. I don’t think we throttled the sin and folly out of that aspect of the economy nearly enough.

And I think — if you look at all the panics and depressions in the United States, they all came from financial collapses, usually preceded by perfectly asinine and greedy behavior. And I think that would be a lot to be said for taking an axe to our financial sector and whittling it down to a more constructive size.

WARREN BUFFETT: Tell us more about how you use that axe. (Applause)

CHARLIE MUNGER: Well, Warren, I’ll make myself ridiculous, but I guess I’m so old I’m entitled to do that.

I don’t think we need any of that stuff. And I think making heroes out of the people who succeed at it is not good for the fiber of the country, either.

I hate the idea that 25 percent of our best engineers are going into the financial sector. So, I think it’s crazy what we’ve allowed. (Applause)

And I think the lack of contrition in our financial sector, after the disgraceful stuff they got us into, is perfectly awesome. It makes Dave Sokol look like a hero. (Applause)