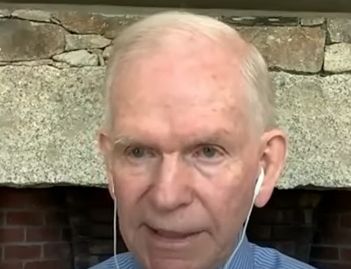 In his recent interview on The Investor’s Podcast, Jeremy Grantham explained how the stock market ‘termites’ always go for the juiciest speculative things first. Here’s an excerpt from the interview:

I would argue that the termites got into action quite a bit earlier than that. You expect them to go for the juiciest speculative things first and the king of the SPACs in my opinion was my own ill-fated Quantumscape. That peaked out in December 2020.

It was the leader of the gang, came at 10 like all SPACs, went shooting up to 132. At 132 it had a market cap of 55 billion bigger than General Motors and bigger than Samsung. Quantumscape, a very good research lab working on a solid state lithium ion battery, half the weight in volume, rapid charge, no fire.

It would be very nice if it worked out, but back then it still had four years to go before it had any sales or any profits and it sold for more than General Motors. You have to admit that is a candidate for the biggest spec of the cycle, bigger than anything I can find in 1929 or 2000, got to remember in 2000 that the pet.coms were scores of millions or in a few cases, a few hundred millions.

This was 55 billion adjusted for inflation, adjusted for anything. That was a monstrous demonstration of the ability of the market to think deep, deep into the future and have positive thoughts. Anyway that peaked out in December 2020. In January ’21, the number of new issues peaked. In February the outperformance of the new issues peaked out and in February also ARC peaked. ARC, an exchange traded fund of about 30 growth stocks that are very early stage growth.

Most of them had no earnings, so that was exactly where the termites would be expected to go to work and then a month or two later the meme stocks with little or no earnings like AMC and GameStop they peaked out, and the whole Russell 2000, although it technically peaked in November, by early February ’21 it was about the same, it plateaued for over 10 months, almost 11 months of ’21 before going down.

They had been rolling over and 40% of the NASDAQ before December ’21 were down 50% or more. So anyone who was into deep speculation knew very well that the bubble had started to lose air long before the end of ’21. That’s one point I’d like to make.

This is the about as fast as markets go down and they always have good rallies. There’s nothing as quick and spectacular as a bear market rally. They had one in late 1929 to early 1930, an absolute doozy of 45% and of course with historical hindsight they signified very little, but at the time they frightened the pants off bears and they give hope that all is over, all is forgotten and it’s back to the races. I suspect we may very well have a pretty decent bear market rally as we sit. I wouldn’t be surprised if this went on for at least another month.