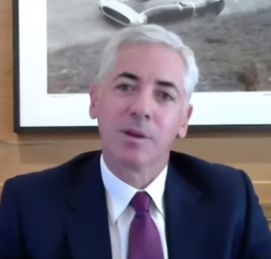 In his recent interview with CNBC, Bill Ackman explained why inflation continues to ‘rage’. Here’s an excerpt from the interview:

Ackman: I think the economy’s actually quite strong right now. The question is where it’s going to be in six months or twelve months.

But, we’re at full employment, there are plenty of jobs available. Wages are going up. Howard Hughes, company we own is opening a food hall, the Jean-Georges Food Hall at the South Street Seaport.

We’ve had to hire 600 people and they’ve been working really hard to do it. They’ve only hired 350 people in the last couple of months. If you’re looking for a job, there’s a good one there.

I think the economy itself is very strong. I had the opportunity to see Jamie Dimon this weekend. I apologize I still have… I’m a little congested from Covid and Jamie talked about number one, this is the lowest default rate period in history for the consumer part of the bank.

Their full spectrum of people that they, you know, poor to rich, that bank with J.P Morgan and Chase and so on are in the best position they’ve ever been.

So I think we’ve got well capitalized consumers for the most part although I do think lower-income people are getting a lot of pressure from higher gas prices, higher food prices, higher rental rates.

And I think the biggest problem with the economy is inflation, and inflation is roaring, it’s continued to rage, and unfortunately the steps taken by the Federal Reserve have not been effective.

Since June, the first 75-basis-point increase financial conditions have eased enormously. The stock market’s up, depending on the market, 10/11% or more and you know. Look at the two year treasury, which is kind of a good indicator of where Fed funds should be over the next eight quarters is under 2.9%.

With the Fed today at, I’ll call it 2.5%, the market saying that the Fed funds will average  only 40 basis points above the current rate over the next two years, and that implies really no financial tightening at all.

Just at the last meeting, Jerome Powell said the Fed was now comfortable that it reached a sort of neutral level of rates which again, a fairly extraordinary statement in a world with 9% inflation.

So I think the problem…

The Fed has to be aggressive in raising rates, getting to something, probably the high 3s, 4 handle, checking in seeing how things are going. But I think rates are going to have to stay 4% plus for the foreseeable future.

Twelve, eighteen months or so in order to kill this inflation. They may need to take rates higher… the biggest risk to the markets is that people are not pricing that in. I think we need to… the Fed has to take its foot off the accelerator. When you can borrow money based off a two and a quarter, two and a half percent sofr rate, that’s the base rate for borrowers, and inflation is 9% and it’s going to be persistent, certainly in the mid single digits for a long time, you borrow as much money as you can.

And so the current prevailing level of rates is amping up the economy, which is why we are having the inflation that we are having now, coupled with the global factors of course.