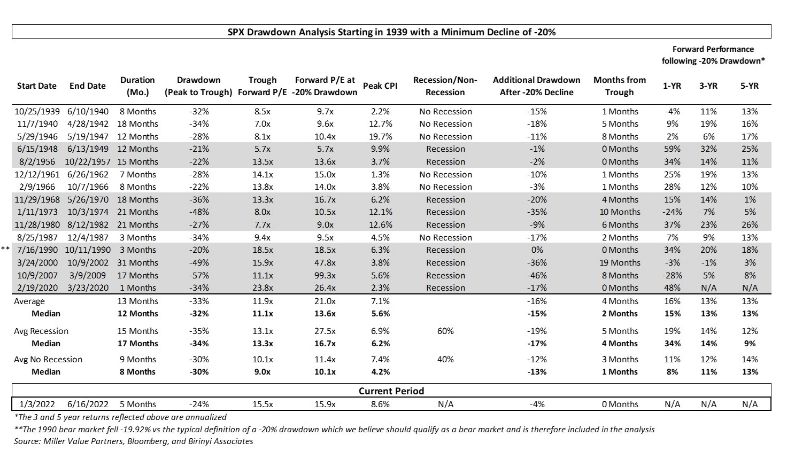 In their recent article titled Plea(sing) For The Long Term, Miller Value illustrate why longer term returns are historically strong following a 20% drawdown. Here’s an excerpt from the article:

We’ve already suffered immense pain with the S&P 500 down ~24% peak-to-trough, clearly well into bear market territory (usually defined as losses greater than 20%).  We looked at all historical bear markets since the Great Depression for clues on what to expect from here.

The bad news is that judging from history, everyone is correct that we could see more downside in the short term.  Once the market dropped 20%, there was an average additional downside in the mid-teens percentages.  That roughly brings us to 3300 on the S&P 500, ~13% downside from where we currently sit (3785).  It  could take approximately 2-4 months to reach that point. Yikes! No one wants that… but wait!

Here’s the really good news! Most of the time, longer term returns from here are strong! Once you have a 20% drawdown, based on historical performance, you have high odds of earning strong returns over the next 1, 3 and 5 years! On average, the market gains 16% over the next year and 13% annually over the next 3-5 years (including any additional losses).

But wait, you say… that can’t possibly be true if we have a recession. Actually, it’s still absolutely true!  If we just look at the subset of bear markets that included recessions, the forward returns are in fact stronger!  As illustrated in the table above, historically, after entering a bear market, the market returned 19% on average over the next year when there’s a recession. Over the next 3-5 years, the market earned 12-14% per year on average.

Granted, there is somewhat more downside in the short-term and it takes longer to bottom, but you can more than make up for it on the other side.  (Note: it’s good to buy low even when it feels terrible!). Even with recessions, you had large gains over the 1-year period 2/3 of the time.