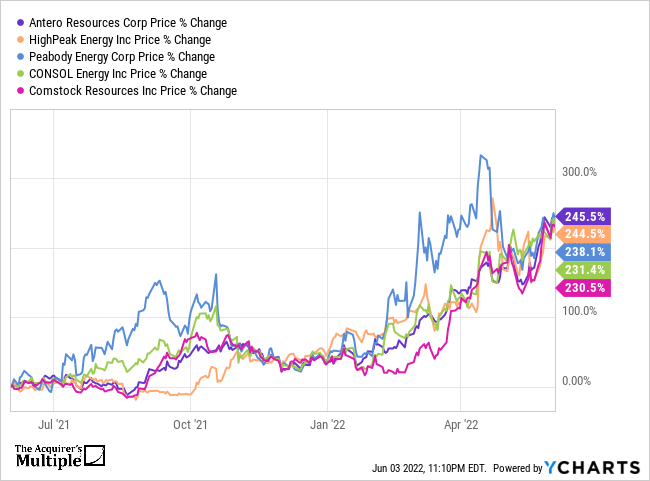 Last week we took at look at one of the most underperforming sectors in the past 12 months, Internet Content and Information. This week we take a look at five stocks that have gained more than 200% over the past 12 months, and its no surprise that all five companies belong in the energy sector. What a difference 12 months makes!

Peabody Energy Corp mines and sells coal through approximately 17 coal mines in the United States and Australia. The Company is engaged in the mining of thermal coal for sale to electric utilities and metallurgical coal for sale to industrial customers. Peabody also markets and brokers coal, both as principal and agent, and trades coal and freight-related contracts.

CONSOL Energy Inc is a producer and exporter of high-BTU bituminous thermal coal. It owns and operates longwall mining operations in the nation and export terminals on the Eastern seaboard. The principal activity involves mining, preparation, and marketing of thermal coal, sold to power generators.

Comstock Resources Inc is an independent energy company operating in the Haynesville shale, a natural gas basin located in East Texas and North Louisiana with superior economics and geographical proximity to the Gulf Coast markets. It is engaged in the acquisition, development, production, and exploration of oil and natural gas. Its oil and gas operations are concentrated in Louisiana, Texas and North Dakota.

Here’s what their performance looks like in one chart: 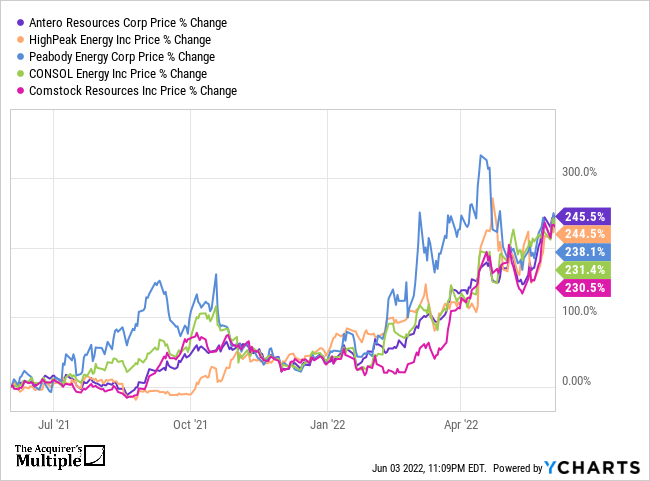