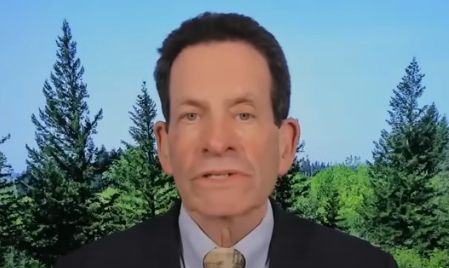 In his recent interview with Fox News, Ken Fisher explained why we’re in a ‘ghost-busters’ bear market. Here’s and excerpt from the interview:

If you think about it, long bonds are negative in this period. Inflation is up. You’re going to go to cash? Going to go to bonds? Gold hasn’t had any glitter. You really don’t want to go into residential real estate because it’s been so pricey.

You can’t go into foreign currencies because the dollar has been so strong all year long. Who you going to call? I’m doing ghost busters. The fact is it’s hard to go somewhere.

Number two, if you go back through all bear markets and corrections that are big defined as longer than five months or down more than 15%, you can actually only find three times where you had the bear market and you had long bonds having significant negative returns.

All three of those, the 1968/70 downturn, the first little correction in 80 before later downturn, and the 90 bear market were all relatively mild in total return and had no capitulation. I think that’s where we’re going but I’m going to make a point that I don’t think most people think about at this moment in time. I think its an interesting one that I think people should just naturally think about but I don’t think they do.

We crossed over 20%. We closed there. Official definition of a bear market. Now you say to yourself, once you’ve gotten down 20, how long is it when you look at historical bears going back through history before you’ve gotten to the bottom, including all of them, and then you’re back to above 20?

The answer, which is just simply averages so it doesn’t necessarily apply but it’s worth thinking about. The median is less than a month.

Any given one is not necessarily the median but the median is less than a month. It’s less than another month before you’re back to where you’re up above 20. In fact it’s only a third of a month from the trough until you’re back up above. Now that’s the median. On average, it’s a little longer.