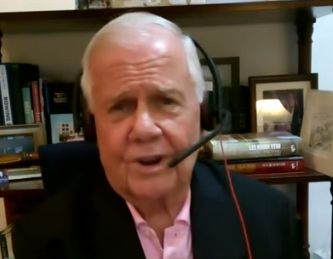 In his recent interview with TD Ameritrade, Jim Rogers discussed the sure signs that we’re nearing the end of the bull market. Here’s an excerpt from the interview:

Rogers: The U.S stock market, and I’ll use that even though there are many other markets, has never had such a long period in our history where things didn’t have a big bear market.

It’s been since 2009, and so that’s 13 years. Now it could last 33 years. Who knows how long it’s going to last, but we’re already well overdue time-wise, historically wise. Inflation is coming. Interest rates are going up so I would suspect we’re getting closer to the end. I see many of the signs that you always see at the end of a ball market.

And as I say, I mean, many people are piling into stocks now, which is usually a bad sign. I own shares. I’m not selling short yet. My plan as I said is when the peace comes and the big rally, peace rally comes. That’s when I would start selling and selling short.

Well I don’t know what’s going to cause it. I am a simple person. I would just suspect somebody is going to sit down in Russia, Ukraine or somewhere and say look this is all madness. Let’s stop this. Nobody is gaining from it.

That will make the Fed say, ah okay we don’t need to be so strict and that will cause the big rally. But that will probably be the last, in my view, that will be the last rally.

You know bull markets end in hysteria when people go nuts, bear markets end in panic when everybody gets terrified. So I’m still waiting for the hysterical phase. At which point I hope I’m smart enough to sell and sell short.