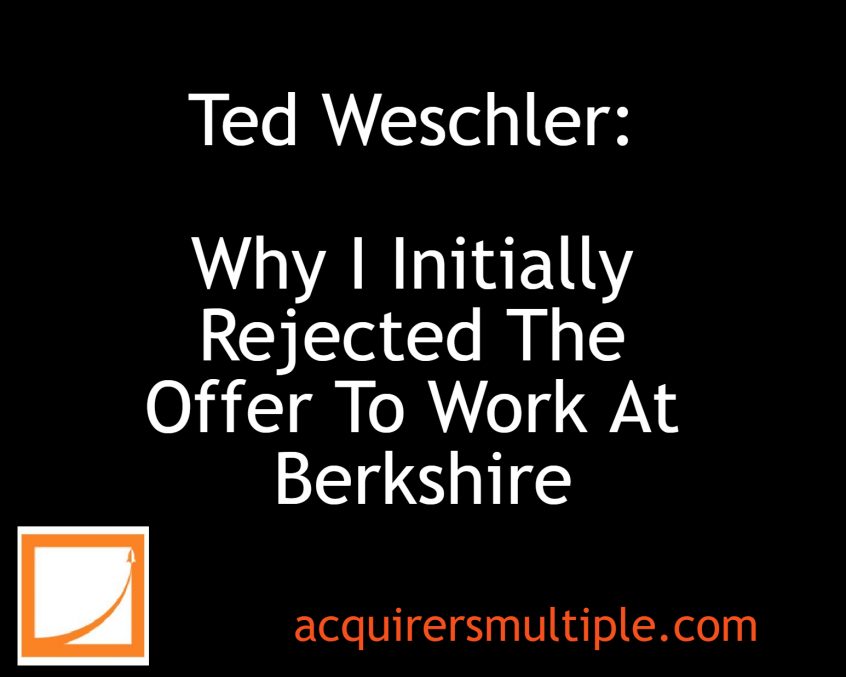 In this rare interview on the I Am Home Podcast, Ted Weschler discusses the time he initially rejected Warren Buffett’s offer to work at Berkshire. Here’s an excerpt from the interview:

Weschler: We went to Piccolo’s and it was terrific and I had probably three pages of questions. And it had entered the end of the dinner I said geez I think I’ve hit everything just naturally off of my checklist but I just want to look at my notes, do you mind? And you can ask me anything if you want Warren.

As I’m looking down at my notes, checking stuff off. He says, you know I think you’d be a pretty good fit out here.

Would you have any interest in working at Berkshire?

I just absolutely panicked! This was like, this was absolutely not what I was thinking. Not at all. Not at all. And my immediate reaction was, there’s no way this works. I got this good gig back in Charlottesville, Virginia and running a two billion dollar fund that’s just me and two other people but you can’t just dismiss it. I mean, this is your hero and so I was like, wow, that’s not what I expected but thank you and I got to think about that.

So he drives me to the airport right after dinner. And drops me off and he gets out. We both get out and he said, yeah, that thing I mentioned at dinner.

He said you don’t have to decide now but if you feel that in 2,3,5 years just let me know. I’m like wow, at the time he was… he just turned 80 and I’m like that’s really something to have that and I really was still like, there’s no way this just does not make sense.

And I I got back to Charlottesville. I gave a lot of thought to it, and I sent him a note that basically said just doesn’t work because my kids at the time were in grade school and my family they had roots in Charlottesville. And I was running a large bankruptcy actually for W.R Grace. It was one of my investments in Peninsula, it was a bankruptcy that I worked on for 10 years and so I said, I really need to see this through.

This is probably another three years and so I sent him a carefully worded letter, send it off and within an hour I’ve got this response from him that’s an email letter on his letterhead that says, thanks for the note and something of the effect, you can manage money from the Moon as far as I’m concerned. So, you can stay in Charlottesville. And I like the fact that you want to finish up this bankruptcy. You can do that on our watch, that’s not a problem.

So like, then I start thinking more and more and a day later he sent me a proposal that kind of laid out how the mechanics would work and all the rest. And then I think I’ve been doing this funded Peninsula for 12 years and once in a while you just want to scrape the plate clean and do something new.

So, I decided. Yeah, that’ll work. And the only thing I asked was that I want to commit that I would come out to Omaha two days a week and be part of the team in Omaha. So I’d commute from Charlottesville, my home and it’s worked out beautifully. So I’ve been doing that for a little over ten years now.

You can listen to the entire discussion here at 11:20:

One Comment on “Ted Weschler: Why I Initially Rejected The Offer To Work At Berkshire”