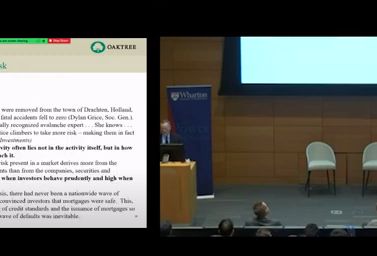 In his recent presentation to the Wharton School, Howard Marks explains why you only find out who the good investors are during bad times. Here’s an excerpt from the presentation:

Marks: I also believe that risk is hidden and deceptive. This is really important.

Loss is what happens when risk, the potential for loss, collides with negative events. You may have some risk in what you’re doing for example if you have a house and it has construction flaws it will stand unless there’s an earthquake.

We lived in California a long time. We saw this in action. So the fact that a house stands in placid time doesn’t mean that it doesn’t have any construction flaws.

Equally an investment can be risky and still not show losses as long as the environment remains salutary, and if you read Fooled By Randomness by Nassim Taleb, which I recommend, he compares investing with Russian roulette, if you know the game of Russian roulette.

You do it about 30 times the bullet doesn’t shoot you in the head, so you conclude there’s no bullet, and that’s what investors do.

When you go through placid times people conclude that bad things can’t happen, that makes them engage in risky behavior. But guess what, if you’ve pulled the trigger 20 times you have increased the probability that you get a bullet on the next pull, not decreased it, so this is important to think of.

The riskiness of an investment becomes apparent only when the investment is tested in bad times, it’s survival of success in good times tells you relatively little. And this is why Buffett coined the phrase in early ’09 – that it’s only when the tide goes out that we find out who’s been swimming naked.

It’s only in tough times that we find out which investments were risky and which were not.

So when you look at a record for an investment, or an investor in good times, and it did well you have to realize that that’s only one side of the story because you don’t find out about the risk in the good times.