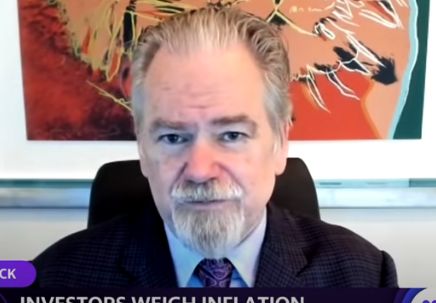 In his recent interview with Yahoo Finance, Rob Arnott explained why we’re seeing the bursting of a bubble. Here’s an excerpt from the interview:

ROB ARNOTT: What we’re seeing is the bursting of a bubble. This– 2020, in many ways, resembled 2000, the tech bubble. During the tech bubble, six of the 10 largest market cap companies, most valuable companies, in the world were tech. In 2020, it was seven out of 10. At the beginning of this year, it was nine out of 10. So unless tech is going to supplant everything on the planet, that’s a bubble. It doesn’t mean every stock in that top 10 is in bubble territory. It just means that collectively, they can’t all succeed to the extent that’s baked into their prices.

I debated Cathie Wood last fall at the big Morningstar conference on, are there bubbles? And I posed a very simple question to her– how do you justify a target of $3,000 for Tesla? She said, well, we’re– it’s going to grow at 89% a year the next five years. And then at the end of five years, it’ll be priced pari-passu with today’s FAANG stocks. OK, 89% a year, that means 25-fold growth in just five years. Amazon grew 14-fold in the past 10 years in stupendous growth. So, in effect, she was assuming that Tesla would achieve twice as much growth in half as many years as Amazon. Implausible, and therefore, a bubble. So I look–

JULIE HYMAN: Well, Rob, if I may, leaving Tesla aside for a moment, I mean, Tesla shares have actually held up pretty well. A lot of this other stuff, though, we’ve seen the stocks fall quite a bit. So you said not all of them are in a bubble. Are you finding value within the tech sector right now? And if so, by what measure?

ROB ARNOTT: No, the tech sector is stretched by any measure. I view Apple, for instance, as being priced for aggressive assumptions leading into the future, but not implausible assumptions. Very possible that the growth will justify the price. Not so for Tesla, Facebook, Netflix, Amazon. A lot of these are priced for implausible long-term growth. And that means you turn attention to value. Value is pretty cheap in the US, even now, after recovering quite drastically in the last few months and even more so in international and emerging economies. And emerging economies value is really, really, really cheap.