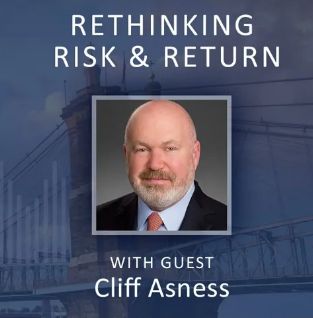 In his latest interview on the FEG Insight Bridge Podcast, Cliff Asness explains why everything is extremely expensive versus history. Here’s an excerpt from the interview:

So by and large, a stock and a bond portfolio, call it U.S. 60/40. You could do a million different versions of this, right? And to this day, I don’t know why we all use 60/40. I don’t think I’ve literally ever met anyone after 35 years in this business who has that as the exact plan benchmark.

But if you look at 60/40 in the U.S., that’s historically returned 5% over inflation. You may be used to looking at bigger numbers, but this is including 40% bonds and versus inflation. We think a rational expectation for the next call at 10 years would be–call it half that, I don’t want to be over-precise. If you read our stuff, there’s sometimes too many decimal points, which is hubris in this business.

One of my set pieces of schtick is when a young person at my firm brings me a number and says, “We expect to make 7.316% on this strategy on average each year.” And I’m like, “0.316, huh? You feel strongly about that?” We’re in an industry where we’re lucky if we know the sign of something often, let alone the decimal point. But call it half of history. I should point out that our forecasts–or as you call them, “Our capital market assumptions,” which is a little wishy-washier than forecast–they don’t include mean reversion in prices.

You could go to some people I really respect, to GMO to Rob Arnott and get their forecast, and they’re actually decently more bearish than ours. Because assume not just that the starting valuation is high–which has a yield effect. If you buy cash flows at a higher price, the price doesn’t have to mean revert. It’s like buying a bond at a lower yield.

They also assume, and I don’t want to–I think I’m getting this right, but if they disagree go with them. They also assume that these high prices today will mean revert at some point, to different degrees over different time periods. So you can get a worse medium-term forecast but a better forever forecast if that happens, because you’ll be back to… So it all depends on your time horizon.

There are people with time horizons long enough that they–a lot of us find it really hard to actually do this, but they should hope for a mean reversion that would be a big fall in prices now, because they’re gonna earn the higher rates much longer. So I should point out that we are forecasting positive risk premium.

Though if there were serious mean reversion, that could not happen. You could get a loss instead of a smaller than normal positive. But the good news is if you have a 20, 30-year horizon, that could actually be what you want. So a lot of moving parts, but we forecast, call it decently lower than history. Because everything on earth, apparently with a possible exception of value stocks, which is me talking my own book, are priced extremely expensive versus history.

You can find the entire interview here: