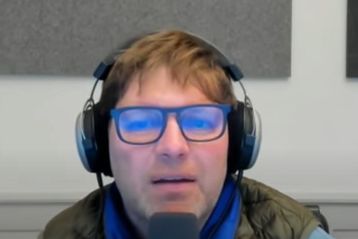 In his latest interview on The Investors Podcast, Guy Spier discusses unlearning and relearning from Warren Buffett. Here’s an excerpt from the interview:

Spier: I am going to the Berkshire meeting, and there’s this wonderful investor who’s extraordinarily wealthy I suspect at this point, who lives on an island in Madison, Wisconsin called Steve Waldman.

Steve, I hope you don’t mind that I’ve called your name out. I hope you’re doing well. And he sits down with me quietly and he says, “I think that…” And this is in 2005/06. He says, “This company, Apple, is really interesting, because Microsoft and Wintel, Windows and Intel are all kind of focused on text and word processing and very simple email, and these guys at Apple, they’re all about graphic design, and they’re all about this beautiful experience.” And he said, “If I think about it, where’s the world going? The world is certainly going towards images and moving images, and they keep bringing out these nice-looking products.”

This was way before the iPhone, and this was many thousands of percentage points before now. And what do I do? I go, “Yeah, but that’s tech, and I don’t do tech. And by the way, Warren and Charlie don’t do tech.” I wasn’t willing to investigate. I mean, this is not me reading about it in the newspapers or some guy who’s not from the investing community that I respect who’s talking to me about it, this happened at the Berkshire meeting.

I saw Steve Waldman at the Berkshire meeting, and he’s sitting and talking to me about Apple. And he’s not a promotional guy. He’s a quiet, thoughtful… And then there was the Berkshire meeting where we discovered that Berkshire had bought Apple, and it was a very painful meeting for me, because Warren had demonstrated that he had unlearned the lessons of, for example, one newspaper towns, but I had not unlearned the lessons, I was still pursuing a kind of a dogma that was silly and it took me another two or three years to get over it, and I think that I’m still getting over it.

So it’s kind of difficult, but we just said nobody said that this is going to be easy. But for me, that’s a huge, huge lesson, and I know that we’re going to get onto it, but that’s why I keep an extremely open mind to crypto, and I’m super curious and interested when members of your team or members of my conference become interested in something that supposedly is not a smart in investment, because where are the good ideas going to come from.