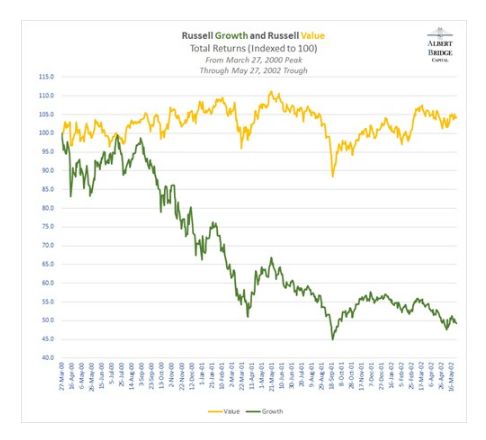 This latest article from Albert Bridge Capital discusses some historical evidence that shows that when growth stocks get annihilated, value doesn’t participate in the downside. Here’s an excerpt from the article:

If Growth Stocks Sell Off Will They Bring Value Stocks Down with Them?

Well, that’s a good question, and I have been getting it a lot lately. Naturally, my first intuition is go back and look at how value names fared as the tech bubble popped in 2000, but we shouldn’t pretend that the whole episode was a perfect proxy for what has played out from 2017 to today, nor how things might go over the next year or two. I wish it were that easy.

In other words, the tech bubble and bursting from 1998 through 2002 may be a valid analog, or it may not.

This post is not a debate about whether it is, but instead just a very simple look at how value stocks performed as growth stocks sold off sharply from their March 2000 peak.

The NASDAQ sell-off naturally accompanied a sell-off in growth vs. value. Using the Russell 1000 Value and Growth indices as proxies, growth peaked in late March of 2000. However, the relative weakness in growth stocks actually ended in May of 2002, a few months before the NASDAQ bottomed.

So it was 547 days of pain for relative growth investors, not the 652 mentioned above.  But it was tough nonetheless. During those days, value crushed growth in style (no pun intended). The Russell Growth index was down over 50% and the Russell Value index was up nearly 5%.

So, if this is any guide at all (and of course it might be completely worthless information), it is interesting to note that during the period where growth stocks were absolutely annihilated, value stocks didn’t participate in the downside.

Albert Bridge Capital – If Growth Stocks Sell Off Will They Bring Value Stocks Down with Them?