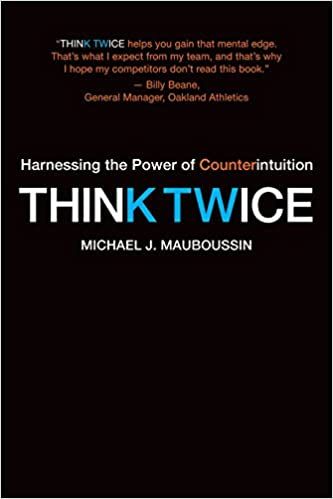 In his book – Think Twice: Harnessing the Power of Counterintuition, Michael Mauboussin explains why smart people make dumb decisions. Here’s an excerpt from the book:

No one wakes up thinking, “I am going to make bad decisions today.” Yet we all make them. What is particularly surprising is some of the biggest mistakes are made by people who are, by objective standards, very intelligent. Smart people make big, dumb, and consequential mistakes.

Keith Stanovich, a psychologist at the University of Toronto, argues that the intelligence quotient (IQ) tests we rely on to judge who is smart do not measure the essential raw materials for making quality decisions.

“Although most people would say that the ability to think rationally is a clear sign of superior intellect,” he writes, “standard IQ tests devote no section to rational thinking.” Mental flexibility, introspection, and the ability to properly calibrate evidence are at the core of rational thinking and are largely absent on IQ tests.

Smart people make poor decisions because they have the same factory settings on their mental software as the rest of us, and that software isn’t designed to cope with many of today’s problems.

So our minds frequently want to see the world one way—the default—while a better way to see the world takes some mental effort. A simple example is an optical illusion: you perceive one image while the reality is something different.

Beyond the problem of mental software, smart people also make bad decisions because they harbor false beliefs. For instance, Sir Arthur Conan Doyle, known best as the creator of the detective Sherlock Holmes, believed in many forms of spiritualism, such as the existence of fairies.

These beliefs prevent clear thinking. To make good decisions, you frequently must think twice—and that’s something our minds would rather not do.