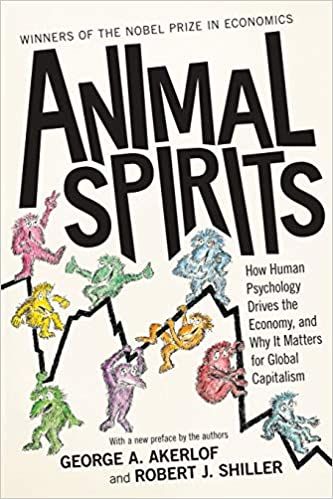 In the book – Animal Spirits, Akerlof and Shiller discuss why there is no link between stock prices and fundamentals. Here’s an excerpt from the book:

Over the years economists have tried to give a convincing explanation tor aggregate stock price movements in terms of economic fundamentals. But no one has ever succeeded. They do not appear to be explicable by changes in interest rates, by subsequent dividends or earnings, or by anything else.

How do we know that these changes could not be generated by fundamentals? If prices reflect fundamentals, they do so because those fundamentals are useful in forecasting future stock payoffs. In theory the stock prices arc the predictors of the discounted value of those future income streams, in the form of future dividends or future earnings. But stock prices are much too variable. They are even much more variable than those discounted streams of dividends (or earnings) that they are trying to predict.

To pretend that stock prices reflect people’s use of information about those future payoffs is like hiring a weather forecaster who has gone berserk.

He would make more accurate forecasts on average if he did not predict that there would be any variation in temperature at all. For the same reason, one should reject the notion that stock prices reflect predictions, based on economic fundamentals, about future earnings. Why?

The prices are much too variable.