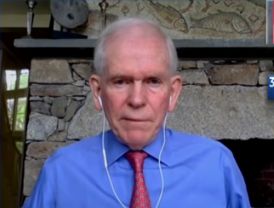 In his recent interview on CNBC, Jeremy Grantham discusses what to own in a broad overpriced world, which includes value stocks outside the U.S. Here’s an excerpt from the interview:

I do hold some gold and it’s not… it’s not helping me much, I will say that. It’s a strange creature gold, not as strange as bitcoin, but pretty darn strange, and I feel uncomfortable and always have owning it from time to time and I don’t heartily recommend it.

But the problem in a broad overpriced world like this is what the heck do you own. I would own some exposure to the green world. I would try and get some exposure to the VC world, not that it will escape completely but it will bounce back so much bigger and better than almost anything else. As I say it has a incredible wind behind it the green side of the universe.

So own some of that, avoid the U.S like the plague other than that and look around here and there. Japan isn’t too bad. The UK isn’t too bad. The value stocks outside the U.S are not too bad, they’re overpriced but they’re going to return over the next 10 years a positive return.

Our forecast in the U.S is for a negative return over the next seven years, which is what we do our forecast over, and I strongly believe that will be accurate.