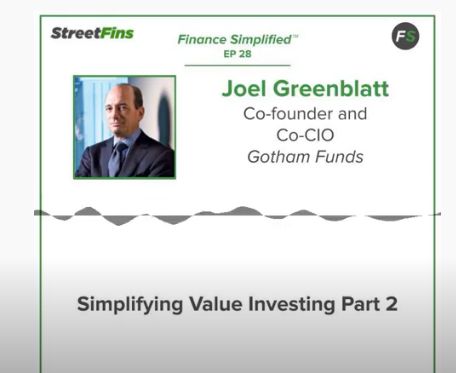 In his recent interview on the Finance Simplified Podcast, Joel Greenblatt discussed ignoring traditional value investing metrics when it comes to FANMAG stocks. Here’s an excerpt from the interview:

Greenblatt: Yeah I think what we talked about before is really relevant here. There is no growth investing and value investing, there’s investing. Growth and value are tied at the hip meaning growth is how much a company is going to grow over time, its earnings and its cash flows go into valuing a business.

The distinction between growth and value investing doesn’t make a lot of sense so it’s very hard to… I think what Howard [Marks] was getting at in his memo at least what I took out of it was there are a lot of companies that appear to be high priced now trading at 30 or 40 times earnings perhaps that used to be considered certainly not value investments they’re are these fast-growing companies that are trading at high multiples and the expectation is they will continue to do so.

Usually when you’re willing to pay that kind of multiple and the question was can those be value investments. Can they be some bargains. Can they actually be bargain priced. And because some of the businesses he was talking about with the advent of the internet and the networks that can be created and the amount of capital that’s needed and the moats that can be created for these businesses, we’re talking about the Amazon’s and Google’s of the world, and the Microsoft’s.

They might be some of the best businesses for sure that I’ve ever seen, and they may deserve much higher multiples than the markets giving them so even though they appear based on historic basis to have high multiples. Even though their growth rates are still high and under traditional ways of categorizing you would call them growth stocks they may be value stocks if you think about it the way we do.

Which is I’m valuing the business and its future prospects and it turns out that price isn’t so high even though based on historical metrics it would have been considered so.

So it has to be looked at in those eyes and some things that typical value investors that would have been categorized as value investors would typically shun because they have the tail marks, they’re fast growing, they’re trading at high multiples are automatically eliminated.

Not so if you’re a more holistic value investor and taking into account that the value of the business franchise and how long these things can grow, how much blue sky they have to continue to grow, and the dynamics are perhaps a little different than what we’ve seen in history and therefore we have to be a little more open-minded as to what traditional metrics matter and which don’t.