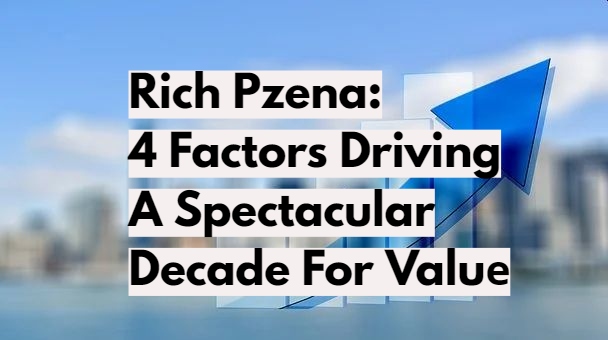 In his recent interview on the Gaining Perspective Podcast, Rich Pzena discussed four factors that could provide a spectacular decade for value. Here’s an excerpt from the interview:

Pzena: I think there are four factors that will potentially make this a good period for value.

1. We’re In The Middle Of An Economic Recovery

The reason that happens is because companies in the downturn, particularly cyclical companies, that have had revenue shortfalls take corrective actions, cut their costs, and then when the revenues come back they’re slow to bring costs back so the profits surprise, and value stocks become momentum stocks.

If you look at economic recovery and you listed what are all of the momentum stocks, they’re the same stocks that the value investors own. That’s what gives rise to the strategy and it lasts way longer than anyone expects because companies are shell-shocked by the downturn. And it often takes years and years before they bring their costs back to levels they were at before the downturn happened.

And this was a doozy of a downturn, by the way.

Meaning as you’re lowering your discount rate, you’re raising the valuation. Once you stop lowering the discount rate all you get is your cashflow yield and the growth. When you’re paying fifty times earnings that means your cashflow yield is two percent. So you have to believe pretty spectacular growth for a very extended period of time to justify the high valuations.

3. Slow Down In Growth Rates Of Large Successful Franchises

The third point is we’re getting to the point where we’re likely to see some slowdown in growth rates of the big big successful franchises. Obviously that hasn’t happened yet and the pandemic has actually been a tailwind for these companies.

You can say the same things for the Microsoft’s of the world who are doing cloud based data processing. Probably half of what will eventually go to the cloud is already in the cloud. Meaning the most that can happen is it will double. But people believe that the high growth rates will go on for a very extended period of time. And that means they believe that the companies are going to come up with other things to do. Other than what they’re currently in. Which is much riskier. And so I’m guessing obviously, because it hasn’t happened yet, that grow rates will slow, and I think that will be punitive in a low interest rate environment.

4. Liquidity Drying Up For Tech Startups

Lastly, the amazing amount of capital that has been available for start-up companies that are doing the disrupting on the belief that every new incumbent will turn out to be like Amazon is going to be a flawed philosophy. And that we’re going to go back to the kind of normal success rates for start-up businesses which is low, not high. And so valuing them at multi-billion dollar valuations before they’re successful is going to prove to be a vulnerability for investors. And I think some of that capital will dry up.

So if all of those things in the next five to ten years it will be a spectacular decade for value, If some of them happen it will be good. And if things are they way they were we’ll have a normal value environment because we can buy stocks today for the same valuations that we have for the last sixty years that have given rise to low double digit value returns.