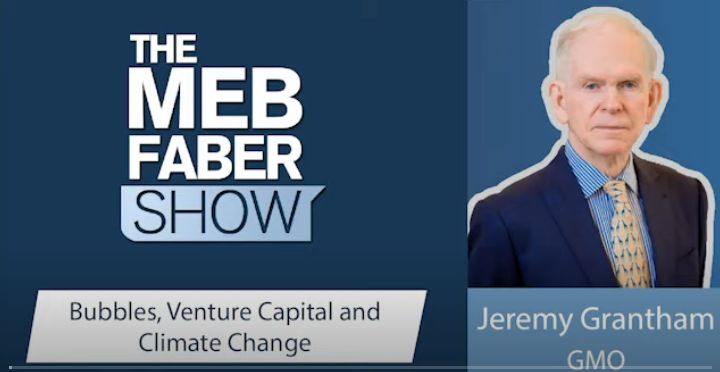 In his latest interview with Meb Faber, Jeremy Grantham relays a story about a time early in his career when he was chasing ‘rocket ship’ stocks. It was a defining lesson in his career. Here’s an excerpt from the interview:

Meb: Is there a particular bubble that you look back on in your career as being the defining one? Would it be Japan? Would it be kind of what’s going on now?

Jeremy: The one that was the most fun for me was a bubble that has escaped all but the most serious, efficient artists of bubbles, and that was 1968 and ’69, where tiny stocks went crazy, like they are today. I was in the out of business school and I was in a dopey general management consulting.

And I asked around who of my classmates were having the most fun? And by far, that was the investment business. And so, I jumped ship and joined a mutual fund group in Boston. And we used to meet for lunch. And these guys were already a critical year or so ahead of me on the business.

So I sat there listening to them and they would trade these, kind of, little rocket ship stocks that would go up 5 or 10 times in a few months, and then kind of explode and disappear. And it didn’t seem to faze them at all. They just considered anyone who got stuck in the exploding parts were just nitwits.

And after a few months, to be exact three months after I got in the business, I was going to go off with my wife for three week holiday in Europe to see our families in England and Germany. And we love the story of the week, the week before we left, which was American Raceways. American Raceways had the world champion race driver, Sterling Moss on its board, and it was going to introduce Formula One Grand Prix racing to America. It’s always been a, kind of, European, South American thing, but it never has really caught on in the U.S.

But it was, kind of power and danger and noise. It sounded to me very, very American. How could it miss? And it opened one track and it did brilliantly well because it was a novelty, of course. What did we know? We thought it was going to happen every time we had a race and it was going to be duplicated in 12 different places in America.

Anyway, I bought 300 shares at 7 and went on my holiday. And when I came back, it was 21, which was kind of typical. And I was thrilled. And so I did what any good value manager would do. I sold everything else I had and doubled up. Okay? And it was 100 by Christmas. And I was rich. And that was enough to buy a house in Newton, a Victorian house next to an orchard with a BMW, only they turned down a bit. And so, we didn’t buy the house.

And early in ’69, as my rocketship descended, I jumped ship into another one and that blew up and the next one blew up, and I was back where I started from with $3,000 or $4,000 left, licking my wounds. Anyway, so that was a thoroughly exciting and thoroughly a dense learning experience, and it had a lot to do with me being a more cautious investor for the rest of my career.