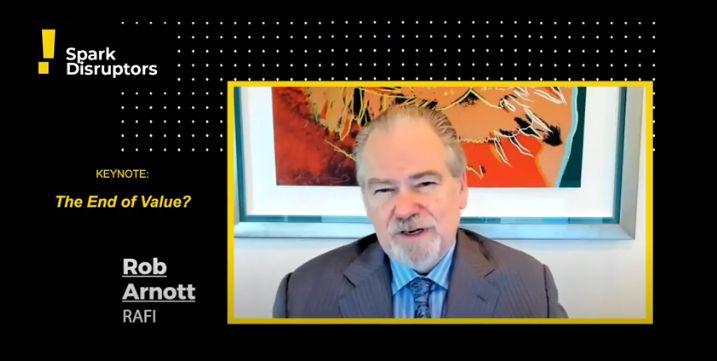 In a recent panel discussion, which featured as a keynote at the Spark Disruptors Conference, Rob Arnott discussed why right now you want to be a value investor before the train leaves the station. Here’s an excerpt from the discussion:

We did some analysis recently in which we showed that if the relative cheapness of value goes back to historic norms value beats growth by 7000 basis points, 70 percentage points, pretty cool.

If it goes back to the midpoint of the cheapest decile in history, right now it’s at the cheapest level in history no exceptions including peak of the tech bubble, but if it goes from cheapest ever to merely up to 95th percentile that’s a 3700 basis point gain over growth.

When we look back in history and find and ask the question when value gets unusually cheap how well does it perform the linkage is really powerful. When value’s fully priced historic norms for price to book are five to one ratio growth versus value.

When it gets up to four to one or richer, that is to say value more than 25% the valuation of growth it’s a coin toss. Value sometimes wins sometimes loses. When it gets below 20 percent, meaning bigger than a five to one ratio, value has never failed to beat growth over the next five years, and has won 97 percent of the time over the next three years. And that’s true in the US, international, and emerging markets.

Now when it gets down to 10 to 1 ratio, right now we’re at a 12 to 1 ratio, when it gets down to a 10 to 1 ratio on average value beats growth by over a thousand basis points per annum over the next five years. The actual experience is closer to 1500 basis points a year so when I look at that does that give me a timing signal that you gotta buy now because it’s turning now? No. It does give me a valuation signal that you’re gonna regret, deeply regret missing that train once it’s left the station.

So I look at the markets today and I think I want to be a value investor.

You can watch Arnott’s discussion here: