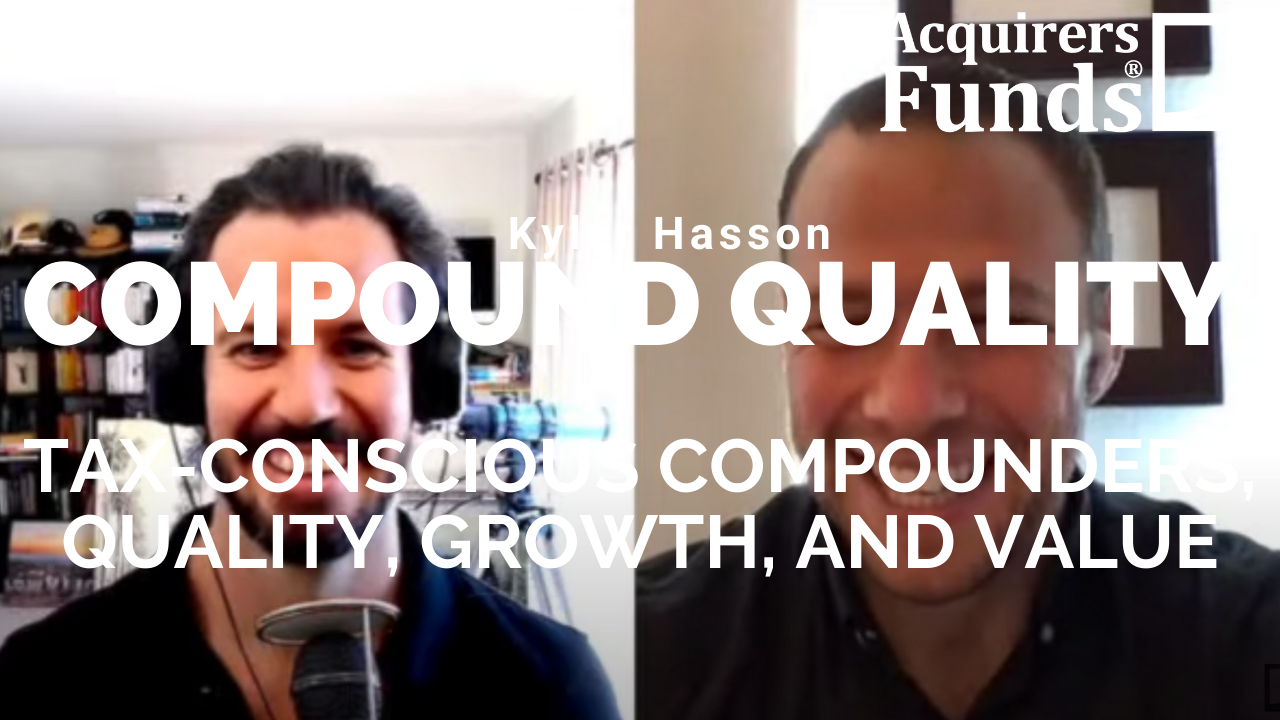 Tobias: Let’s talk about your portfolio a little bit. How do you think about concentration, diversification? Let’s start there and then I’ve got a few follow-up questions.

Kyler: Yeah, that’s a good question. So, this is something I’ve changed my tune on– well, even this year. I’ve always been pretty concentrated, maybe very concentrated. Most of my clients own eight or nine things, they’re not fully invested. So, those eight or nine might be 70% of their money. I invest money for individuals. Most of the time, if I do my job right, I can be investing money for them for, hopefully 30 to 60 years, a long time. If you’re taking too much risk, over those kinds of time periods, I think you blow up. And so, I don’t invest money for institutions. I don’t invest money for people generally, that say, “Hey, I want you to go out and make the highest return you can.” Most of the time, we have some money, we worked very hard to earn it and say that, “Can you keep it and not lose it, and then you know, hopefully grow it. That’s sort of what feeds into that all the quality business and avoiding all the bad things.

The first thing is, hey, we want to keep our money and hopefully grow it. I’ve seen probably more than I appreciate it is clients of mine that they don’t want a ton of risk. And by risk, I mean the possibility of having significantly less of it after inflation over time.

Kyler: Yeah, it really is. Yeah. I mean, listen, I mean, if you took a cross-section of some Americans that had saved some money up, and that had 40 or 50 years to invest, and you said, “How many of them actually beat that bar?” I think you’d be surprised at the results. And that’s even in an environment that was really conducive to making good real returns. So, going forward, I think the environment’s going to be a lot harder, frankly, just–

Tobias: Why do you say that?

Kyler: Well, where bond yields are, if you have a 60/40 portfolio on 40% of your money, you make whatever, zero or one. Stocks, I’m not one to say that you can really accurately predict the returns of stocks, but I’d feel pretty confident in saying that, if you’ve got 10 or 20 years, I don’t think we’re looking at double-digit returns. If rates are higher, and especially real rates are higher, you could be looking at a fair amount of time of returns much lower than people are used to. Obviously, the famous examples 1965, 1982, I think the DOW was flat, you got some dividends, but rates went from very low to very high. That’s always a risk. So, if you just said, you have 60%, your money-making five or six, and 40% of it making call it zero, three, three and a half percent returns. It’s the math gets a little tough.

Tobias: Plus, inflation running a little bit higher than that.

Kyler: I think for a long-term investor, assuming you own a bunch of cash generative businesses, I think that’s your biggest risk. Especially from low, I think the market in the last little while is run up a little bit on real rates are negative. And so, I think stocks are worth a lot, but if that changes, it could be trouble. At any rate, they want to make a good return after-tax, and they don’t want to have a lot of risk. I talked to a couple of my bigger clients in this April 2020. United States were shut down, markets were going kind of haywire. And due to their prudence, they had some extra money, and we’re looking to deploy it. And so I just sat him down and said, “Hey, here’s what you own,” and the first things we talked about were, are they profitable, and free cash flow positive, even in this lockdown environment? And secondly, what does debt look like? And when is any debt do who knows if we can roll it? And they weren’t so much– listen, other people have different mandates, but for me, they’re not so much, “Hey, we need to make the S&P plus one.” We’ve got money to put to work and we want to make sure that it becomes more money.

With all that being said, you say, “Hey, Kyler, you own eight or nine things for clients.” That seems a little silly. I think there’s some truth to that. Everything that we own is on from a cash flow perspective is done okay this year, haven’t had any blow-ups. But if one big investment we had something happened, we could be having quite a bad year. So, I think the world’s very uncertain, I think business is very uncertain, and I need to do a better job of making sure that people are protected from sort of idiosyncratic risk. What makes it hard is going back to the tax thing, is you have a bunch of things you’ve owned for a long time that you’re going to have to pay some tax to diversify like that. So, I’m thinking through that as we speak. But I think the goals to own a few more things.

Tobias: Do you trim if something runs up a lot a year? Do you add if it comes back? How do you think about that sort of rebalancing? Is that something you do or you buy it one time when it gets to valuation, you gone?

Tobias: Because that’s hard with the tax question as well?

Kyler: Yes. So, I think there are some certain cases where I generally do not trim herself. And that is if I own something that has some optionality in it. And so what I mean by that is, if you own Berkshire Hathaway, the intrinsic value over the next 10 years might go up 6, or 8 or 10, or maybe a little bit more percent, but it’s not going to go up 15% a year. I mean, unless something insane happens, but generally, it’s big, it’s diversified. They’re so big that when they do deploy money these days, they’re not going to get humongous IRRs on it. So, there’s not a lot of risk to the upside on that. I own and have owned a company Constellation Software for a while. They deploy a lot of money into very small acquisitions at that very good IRRs. Probably last few years has been about 25% plus. So, as a holder of that company, I have some expectations on, your biggest variable first is organic growth and profitability of the base businesses, which they’re very sticky. They’re low TAM, so it’s hard for people to compete against them. They’re very oligopolistic. They’re not the growthiest, but they’re solid.

So, then the second question is, well, how much can they deploy into M&A? And maybe six or seven years ago– well, not six or seven. Few years back, they’re doing $150 million a year, at even sort of higher ROICs and it was like all their cash flow. And if you do the math, you get a lot bigger really quick. And so now this year, I think they’re in the range of 600 to 700 million a year. And so, the optionality on that is, listen, if they can deploy most or all of their free cash into acquisitions over six years, 26% ROIC, their earnings have just 4Xed. So, there’s some good optionality there. If I think it’s a little expensive, I’m going to be pretty hesitant to sell it. So far, that’s been a good idea. Will it always be a good idea? Probably not. But I think there’s a good chance that they continue to deploy a lot of money, a good rate of return and that thing works for a long time. It’s going to be really expensive for me to sell it if it runs up too much as a percentage of somebody’s portfolio, sure, I could trim it. But after taxes, it can be harder. But that’s how I look at the never sell idea.

I don’t want to get rid of optionality. If I own a normal sort of value stock, and it’s past what I think and after-tax, I think I can get a good price on it, then I’ll do a lot more susceptible to selling it.