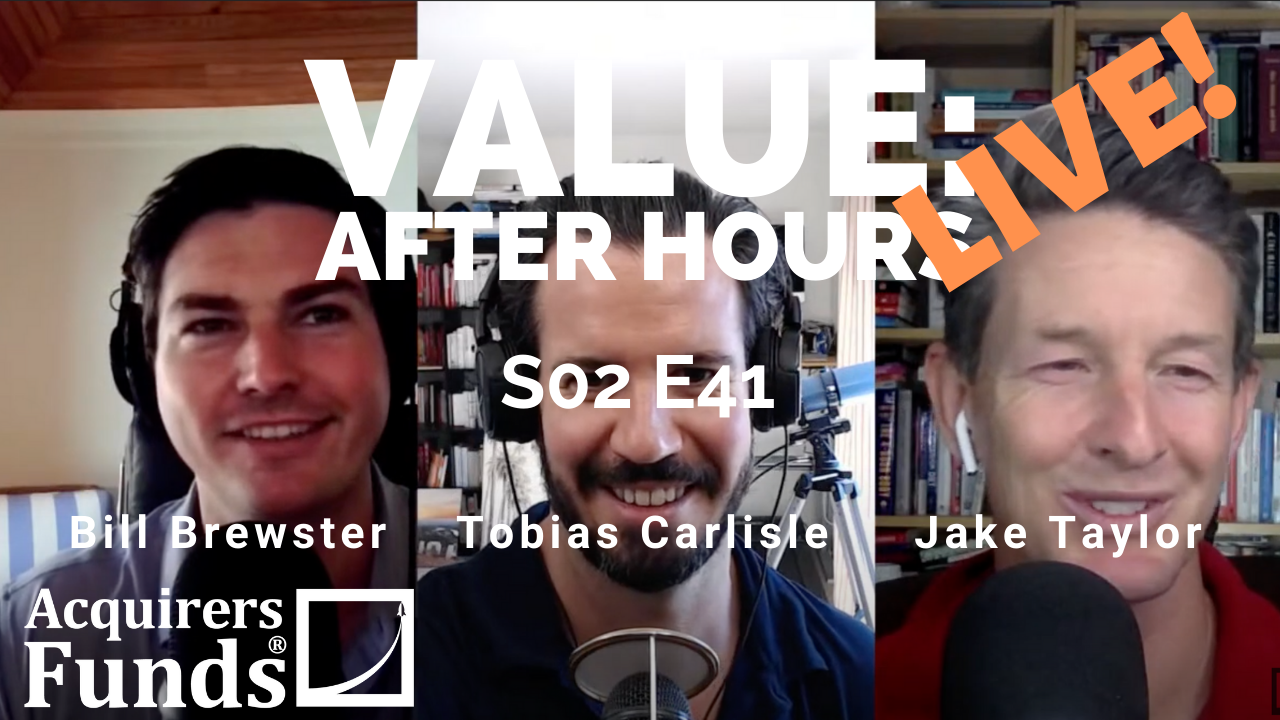 During their recent episode of the VALUE: After Hours Podcast, Taylor, Brewster, and Carlisle discussed Loeb’s Mickey Mouse Activism $DIS. Here’s an excerpt from the episode:

Tobias: All right, let’s talk a little bit about Disney. Dan Loeb, fearsome activist, used to write the nasty letters, as we’ve discussed previously, has sort of taken a vow of– not chastity, not poverty vow. He’s not going to be saying nasty things to management teams anymore. So, he wrote this note to Disney. I actually think the rationale is pretty good. He said, “You’re spending $3 billion a year on the dividend. Cut the dividend and reinvest it into streaming.” That’s a lot of money if you stick it into streaming because at the moment in the market, even putting aside the short-term stuff that everybody’s quarantined and watching a lot of TV, clearly the world is going to go in that direction. Netflix has got an enormous multiple on it. Disney get that multiple by reinvesting in the streaming infrastructure.

I concur with the strategy. I think it’s a good strategy, but I just wanted to get this little addendum that he put onto it. I tweeted something out yesterday, it was a little bit cynical. I’m going to take it back a little bit because he added this in. This was a footnote by the way. “By providing you with our analysis, we do not intend to participate or intrude in the basic business decisions of the company. We do, however, believe it is an important aspect of our free enterprise system for management and boards of directors to listen to investors’ perceptions of a company’s long-term prospects, and opportunities to enhance shareholder value.” 100% agree with that. I think that’s an entirely legitimate thing.

So, really, all they’ve done is they’ve written a letter, and they’ve said, “Here’s our idea, don’t spend so much on the dividend, reinvest into the streaming.” And then, he’s shown some of their analysis. I really liked the letter. So, then Disney responded, and they said, “Yes, what we’re going to do is we’re going to restructure, we’re going to allocate some more resources to the streaming side. We’re going to do some sort of cosmetic stuff internally in a management sense,” and then the stock popped 5% after hours. My tweet was, Loeb pretends to do activism, Disney pretends to respond, stock price pops 5%.

But on thinking about it again, I actually think this is how– capitalism and public companies and big investors, this is how it should be done. He doesn’t necessarily have to make this little public but I’m glad that he did because as a potential investor in Disney, I like learning from Dan Loeb, I think it’s a good thing. As a big investor, you just express your wishes. And management, they said no to the dividend cut, because there are lots of good reasons to keep the dividend. But they said, “Yes, we’re going to do something with the streaming.” I thought that was a pretty good illustration of the way that– maybe that’s how business should be done.

Jake: I’m curious about that everyone looks at these TAMs and talks about how big, great these companies are. But right in front of our face, we have Netflix talking about going into animation, and Disney trying to get into streaming content. So, this is like a collision course. Tell me there’s not going to be a bloody ocean waiting for all of this stuff a couple years out from now?

Bill: [crosstalk] I’m not sure that that’s true. I think your bloody ocean might be filled with Viacom and CBS and all that. I’m not sure there’s not a chance for Netflix and Disney to coexist, and that’s your next $60 bundle.

Tobias: The only thing I would say is that– and this is the criticism that I made of Netflix when I was short last year. There’s a big difference between being a cable company and having the wire punch through a wall where there’s really no competition, and you set the price that the customer will bear. The introductory number is $40 a month, then it’s $80 a month, and then it’s $120 a month and what are you going to do? You can’t get anything else. On the other hand– And so, that’s the business that the cable companies are in.

The movie studios, they stick a billion dollars– that might be an exaggeration, but let’s say hundreds of millions of dollars into these big movies. And if they work, then it’s a bonanza, and you get Marvel, or you get Titanic or you get something like the big blue aliens on the other planet, whatever that was.

Tobias: Avatar, thanks. Yeah. But the other option is you spend a whole lot of money in these things and you get Waterworld or you get something like that, it’s a boom-bust kind of business. And all of your investment is upfront, that’s a tough business.

Jake: Whose multiple is wrong, then?

Jake: Have you ever streamed it, bro? [laughs]

Bill: Well, the fact of the matter is– I don’t know, they’ve done much, much better than I thought that they would, and their scale is getting bigger and bigger. It’s not like the capital markets are turning off to them. They have a shareholder base that wants him to go do this. I wouldn’t be smart enough to run the same strategy, but if you drop me in their shoes, I would do the exact same thing. I’d probably try to spend more. I mean, I don’t see why they– There is no incentive when you’re trying to own the rest of eternity basically. They’re trying to get a scale advantage on video content. I mean you laugh, but they might actually do this.

Tobias: But the thing is, if you’ve got a smart TV now– I think that’s an old term. That’s like Space Age, when that was 50 years ago. If you’ve got a smart TV, you can get a tile on that smart TV, and I can produce the content and give you a tile for your TV. No one cares whether you’ve got– I can switch off any of those tiles at any stage and I regularly do. If HBO sucks, I’ll turn HBO off. And then, if something comes on that I want to watch, I’ll turn it back on again. So, I can just turn a tile on and off anytime that I want.

Bill: Yeah, but who’s going to be around at the end of this?

Jake: When has anyone ever won in a scorched earth scenario?

Tobias: But the way that you win this game is not–

Tobias: I don’t think the way that you win the game is by signing up the entire world. The way that you win the game is by producing the best content and that’s extremely hard to do, but Disney has a huge advantage there. Disney, they’re very, very good. We’re going to get a tentpole Princess, and we’re going to own that demographic of little girls who remember that– like Frozen, Elsa, everybody who’s got kids, girls of a certain age, that’s their princess. There’ll be another one that will come out and it’ll be– they’ll own that. Disney is very good at recycling that content through merchandise, television, that’s the– [crosstalk]

Bill: If I ever get the opportunity to renegotiate with my wife, the one girl that I could leave her for, Kristen Bell is going to be like way high on that list. The fact that she was both Sarah Marshall and can sing like Anna. Oh. Oh my. That got me hot and bothered.

Tobias: Is that– Forgetting Sarah Marshall, is that–?

Bill: Yeah, dude. Yeah, and she can sing. That was sexy. But I digress. I guess that the way that like my– [crosstalk]

Bill: Maybe, I don’t know if I need more of her in my life. I may need less.

Bill: I just think Disney has a real shot. I’ve talked about this particular letter now for hours and hours with Francisco, my buddy, The Science of Hitting, and I guess that where I think I’ve come on this is Disney has a unique opportunity right now to really push the envelope and to flex customer relationships in a way that no other company has. Other than maybe Netflix.

Netflix, I happen to agree with you, Toby, when you were like their inventory ages like food. I can’t even remember the De Niro movie that came out. Honestly, I didn’t even think that thing was that good. It sucked to watch it on a screen at home. These arguments about going direct to consumer, I think, are insane. The theater experience made Marvel and Star Wars what they are. I don’t think if you drop a bunch of movies direct to consumer and collapse the theater window and have everybody watching stuff on shitty ass sound in their house– God forbid your house is tile, there’s no sound. It’s just bouncing all over the place. Frozen sounds like shit. I don’t think you can do that.

Jake: Wife never lets you turn it up anyway, loud enough to get that little thud in your chest.

Bill: Yeah, well, like your speaker– I don’t know, I just think the theater experience is very important to somebody like Disney. So, I think that people that are arguing that Disney should copy Netflix in that way are really missing a big part of the picture. But I do understand why this is the time to press the advantage. I thought Loeb’s letter at first was– the feedback that I had heard about it, I was like, “This is kind of nuts.” And then when I read it, I did kind of like it. And I think that the stock reaction today seems pretty rational to me. If you start doing the math on 200 million subs, 10 bucks a month or whatever, it gets pretty crazy. And they don’t have that– Disney doesn’t have that perpetual machine to feed like Netflix does. I think Disney could get to similar numbers with much better economics than Netflix can end up happening, just as a function of their franchises and back catalogue. And that shit is hard to do. Watch the Frozen–Making of Frozen 2 is awesome. That was really good. Forget about Kristen Bell. Don’t forget about Kristen Bell. But watch it despite that, she’s the bonus.