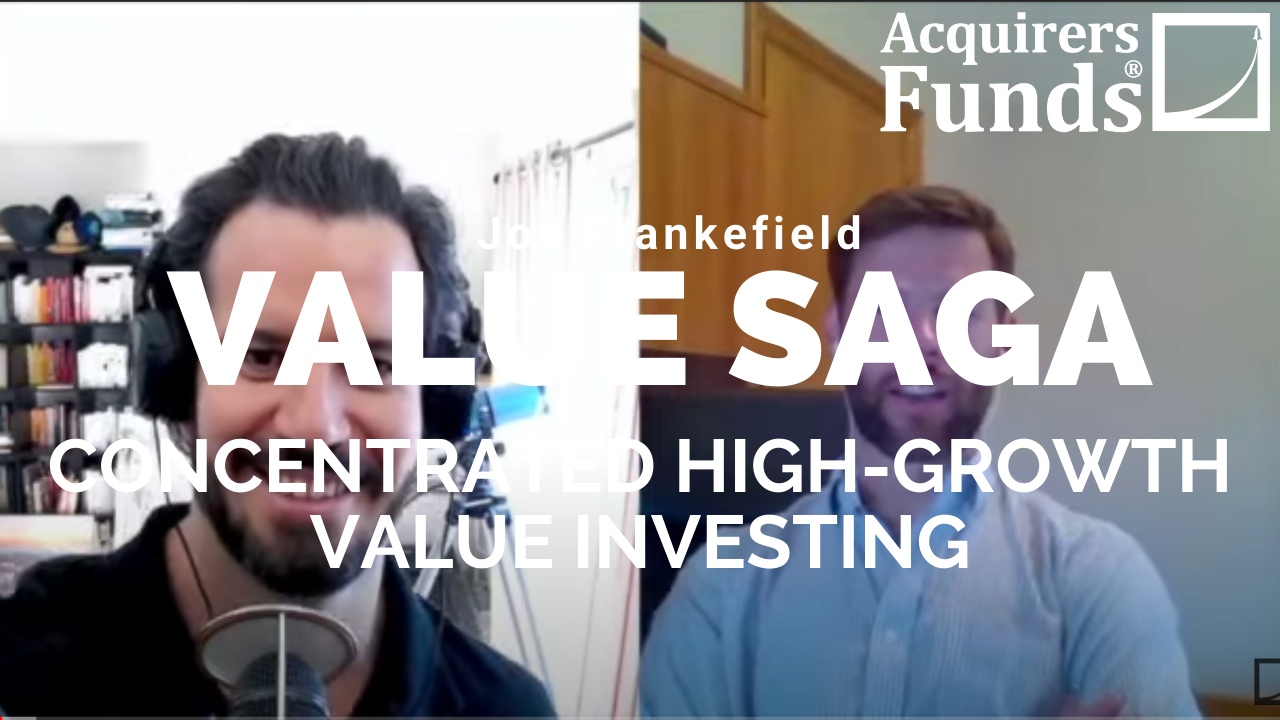 Joe: That’s spot on where our portfolio sits today. I do say, I guess to start with the Saga philosophy, I mean, the core idea is that, fundamentally, every asset is worth the cash that is distributed to the owners over the life of that asset. Whether it’s a bond, the commodity, or an equity of a company. And so with that said, your duration or your outlook has to align with the life of that asset. And we’re looking for the best opportunities available out there. Right now, we find on equities, which is usually a case throughout history. And so if you’re going to own a company, you fundamentally have to be– people leave valuable asset as a cash that is distributed over the life, that means you have to be long term oriented, because those cash flows longer 5, 10, 15 years out are worth a lot more than the one, two, three years out. So, we are fundamentally long term investors and trying to figure out where a company will position long term.

Alternatively, if you invest in a three-year bond, your horizon is three years because that’s if you’re going to hold the asset during its life. So, all we are trying to do is buy assets for less than we think they’re actually worth. And it’s worth different to different investors, but we’re trying to find the most attractive returns available in the market today based on today’s prices. And so, where we have found the opportunities are the ones where the market is underestimating their potential long term. And if you’re looking long term, it’s like companies that have a moat that have that competitive advantage, typical Warren Buffett competitive advantage, which I think is not explained often enough or use too often by law investors, but they have to have excess earning power. They have to be earning more than their competitors to make it valuable down the road. They’re just earning subsistence earnings, just to get by, that’s not going to give you a good return.

I think from what you see, I hate the being categorized as a growth investor versus a value investor. I say, I’m a value investor, because I’m trying to earn an attractive return in any asset. You may look at our portfolio and, yes, the companies we own are high compounders today, but that’s because that’s where we find the opportunities today. I tell investors our portfolio, I mean, I would be happy to own a no-growth company if I found it an attractive rate of return. So, an example is a Coca-Cola, one of the best businesses in the world, the best brands, has economies of scale. I think in 10 years, I have an idea that what Coca-Cola will be doing in 15, 20 years. And the thing is, it’s just not attractive based on today’s price. I mean, I think it’s selling for 30 times earnings or maybe even more on a free cash flow basis. And the thing is, they just don’t have reinvestment opportunities.

What they do is they essentially distribute all that cash flow either through dividends and stock buybacks, which is what they have done. And now, if you’re going to buy a company that’s going to grow their top and bottom line, low single digits, maybe mid single digits, if they do really, really good job, and you’re buying it 30 times, you’re not going to get a market return. It’s probably fairly priced. If Coca-Cola was selling for five times their free cash flow or earnings, and they distribute, and I had confidence that they were going to distribute all those earnings to investors, that would be attractive, that’s a 20% plus yield to be held for 10 years. We’re just trying to figure out what’s the best return opportunity.

So, what we have found is, and the market has not fully appreciated, and it’s appreciating more today as valuations continue to go up, is that if you find a company earlier in their lifecycle that established themselves as the leader in an industry, and it’s a big TAM, that word is also used a lot by– but it’s a big end market, oftentimes, they’re under estimating their potential. But that’s not always the case. It’s always like trying to weigh the cost benefit of every single situation, but you might look at like, a Shopify, or Zoom and like, yeah, those companies are amazing, fundamentally. Look at the financials, and they generate a lot free cash. And they’re growing at such high rates, they do have an advantage relative to competitors. But like, if you actually are looking for that 15%, 20% return, like Shopify is, I think selling for– might be $120 or $30 billion at this point. And they’re not distributing cash to shareholders, and probably won’t for the next 10 years because the reinvesting in the business, especially in the distribution and network.

They’re going to be $830 billion company one day, if you wanted like a 50% return. What would you need to fundamentally to justify a $800 plus billion market cap? You probably would need at least 80 billion in sales, 30 billion in operating income, and you’re thinking about like, the thing that makes me say, we’re not in a bubble or anything like that is like, it’s possible. I mean, at Shopify, if I were to guess on a company, Shopify would be a company that would do that. I mean, they have a counter Amazon position. But I mean, it’s not one where I think like, there’s that margin of safety, but it’s one that– that company I followed for the last four years pretty closely and just haven’t watched it gone up, up and up. But all we’re looking for is the best return based on today’s prices. And that has led us to companies that have these high growth rates that we think the market still under appreciates, based on where they’re going to be positioned in 10 years from now.