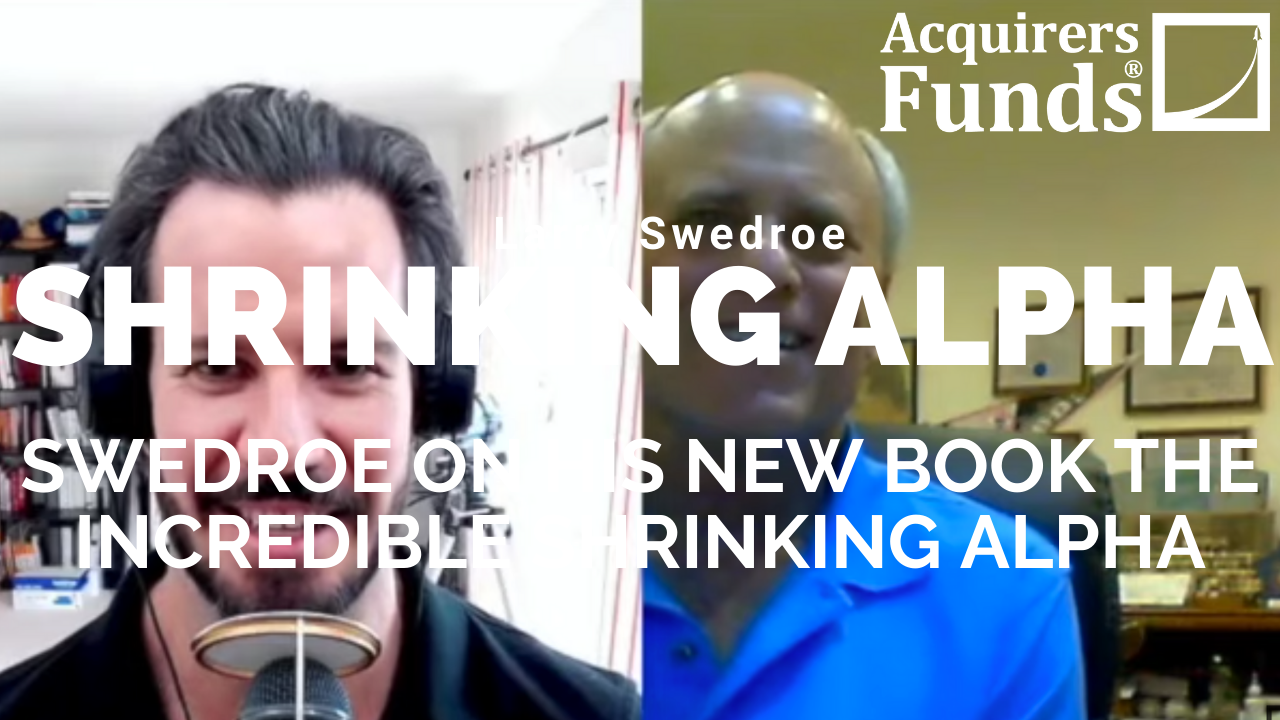 During his recent interview with Tobias, Larry Swedroe, author of The Incredible Shrinking Alpha discussed How Alpha Becomes Beta. Here’s an excerpt from the interview:

Tobias: One of the interesting things early on that I saw, you talk about alpha becoming beta, what do you mean by that and how does that happen?

Larry: Yeah, so let’s define alpha for your listeners. Some may not really understand that term.

Tobias: Feel free to explain it to me too.

Now, if you deliver alpha or beat your benchmark because in years when value outperforms, you load more on it and then in periods when value underperforms, you loaded less, so you shifted and bought more growth stocks as an active manager. So, your average exposure to value was the same as the index, but you had the right exposures, that’s truly alpha. The key issue is this. We want to look at alpha as outperformance against an appropriate risk-adjusted benchmark. Beta is nothing more than a common trait or characteristic of a stock or a portfolio.

Now, the CAPM was important. I don’t want to dismiss it even though it was wrong because models we know are not meant to be like cameras. They don’t take a perfect picture. They’re more like engines that help advance our understanding. In other words, if it was a law– it was a perfect picture like a camera, we would call it a law, like we have in physics. This is a hypothesis, a theory about how markets work. So, right away people, practitioners, and academics went to see if they could find if there were flaws in the model. And they found out that the model market beta was only able to explain two-thirds of the differences in returns of diversified portfolios.

So, for your audience to keep it simple, Toby’s got a portfolio of 100 stocks, he gets 13% returns. I build a portfolio of 100 stocks, I get 10%. Now, that difference of 3% could be attributed to Toby being a much better stock picker than me, it could be luck. Maybe we both threw darts, and his stocks happen to get better than mine, or no. We don’t know. Now, beta was able to explain two -thirds of that difference or 2%. So, most of Toby’s outperformance was explained by he just bought higher beta stocks. However, there are other one-third could have been luck, it could have been skill, or it could have been some unexplained factor.

Well, just walking quickly through, one, we now know that market beta has a real problem because the asset pricing line is not flat. It’s really humped. The lowest beta stocks have lower returns than the stocks that are in the middle of that hump. So, it’s fairly flat, but slightly upward sloping, and then when you get to the fifth quintile, the highest beta stocks, the returns collapse. They’re a disaster. You want to avoid them except in stock market reversals like in March of 2009. If you can predict them, you want to load up on high beta stocks.

But at any rate, so that created a problem, they became known as the black hole of investing, lottery stocks. Typically, they were small growth companies with high investment and low profitability. People trying to find the next Microsoft, overpay for those stocks and limits to arbitrage and the cost of shorting them and the risks just prevent sophisticated investors correctly. So, that was the first problem there.

But academics also were trying to find whether there’s some common traits that active investors were using to identify stocks that could outperform the CAPM. And so, in effect, they reverse engineer things. You might think of say Toby’s PhD in finance. He says, “I want to see if I can replicate Warren Buffett’s performance. So, I’m going to see what are the common traits? Are there common traits of the stocks Buffett buys? And if there are, I can replicate his performance, or at least maybe come close to doing that. So, Toby does his work and he finds Warren Buffett likes to buy low P/E stocks. Well, research show that low P/E stocks outperform, and they explained a good amount but not anywhere near all of Buffett’s outperformance and the research showed small stocks outperform large stocks.

Eventually, we then saw that momentum stocks. Stocks with recent outperformance, outperform those that did poorly. And then later, academics learned the real secret sauce from Buffett, which he had been telling everybody all along, but it took until about 2006, Fama wrote a paper on profitability. Robert Novy-Marx built on that. I think his was 2012 called Gross Profitability. If you combine profitability with value, so Buffett’s real secret sauce was buying cheap companies that were also more profitable. Turned out that you virtually eliminate certainly from a statistical significance standpoint, Buffett’s alpha was gone.

In other words, his secret sauce was not individual stock-picking skills, but in figuring out 50 years before all the academics that if you bought stocks with these traits, you would outperform. And that research was published in two papers by teams at AQR in Buffett’s Alpha and Betting Against Beta, that combined. You don’t want to own those high beta stocks, and you want to own cheap stocks that are also profitable, or they expanded profitability to a broader quality.

And now, every single fund that my firm uses, whether it’s Dimensional or Bridgeway or AQR or BlackRock and others, they’re all using these same now well-known factors, so every investor today, literally being passive can buy the exact same types of stocks that Warren Buffett bought. The only difference is, they don’t get to buy Goldman Sachs at their debt with convertible options or whatever at a big discount because Goldman desperately needed both Buffett’s $10 billion overnight and they wanted his imprimatur name and reputation, so he could cut a special deal. But if you look at the stocks that Berkshire owns publicly, there’s no statistically significant alpha any longer once we account for the leverage that he’s able to apply from his insurance.

So, that’s what we mean by alpha getting converted to beta. Academics call it reverse engineering, are able to figure out what this really smart active managers were doing to generate alpha and then make it systematic, transparent, and replicable. So, all these sauces of what were once alpha have disappeared. 20 years ago or 30 years ago, you could claim alpha by buying small value profitable companies. You can’t do that anymore because I can replicate them in an index fund or a similar systematic passively managed fund, whatever the words you want to use. So, that’s the biggest problem. Most of these sauces of alpha have disappeared. They’ve been converted into– that was only one of the four factors though that are influencing this trend and going to continue, I think, to make active management even more difficult.