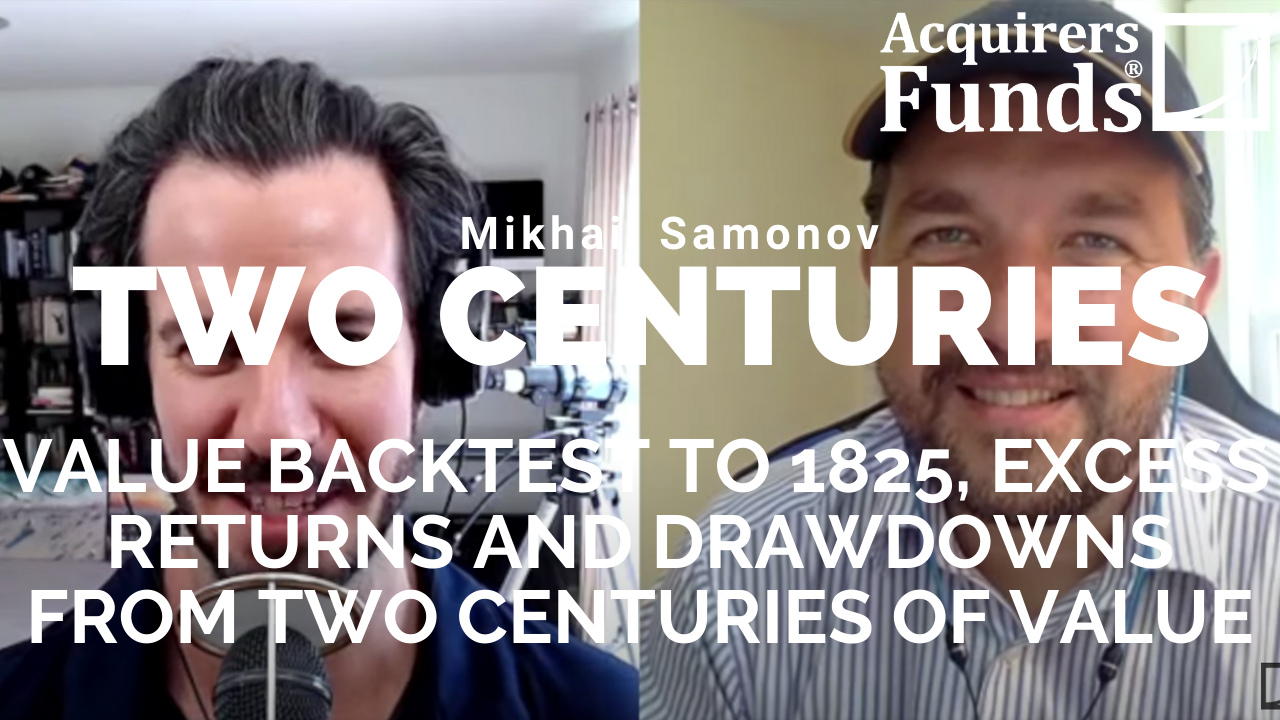 During his recent interview with Tobias, Mikhail Samonov, Founder and CEO of Two Centuries Investments discussed Should Value Investors Double Down?. Here’s an excerpt from the interview:

Tobias: So, the last thing that you discuss in that paper, you say that there are a number of reasons why people think that value works. I think that you said, “I don’t have any view on whether it’s a risk argument or whether it’s a behavioral argument,” but do you have any thoughts, why does value work?

Mikhail: The risk story is very good in many ways academically, conceptually, is about all factors, value and momentum, anything else. Even the stock market. The premia story, compensating for risk, we all speak that language. It’s very good for risk management. It’s very good for diversification. It’s very good for attribution if we can decompose Buffett’s returns and having these core attribution models. And we’ve gotten really good at it, it’s also very engineering friendly, and it just fits a lot of math and models.

But I think there’s a big risk of saying that, if something is risky in terms of covariance, correlation, we’re going to tie it to some theory that there’s a compensation necessary for that risk and correlation. And then we’re going to say, we’re going to put it in a portfolio in a massive way, because we expect, just like the stock market, to deliver an equity premium, and then have these other factors delivering premium because, look, they crash and they correlate stocks that have those exposures correlate with each other. So, they influence the risk matrix for sure. But is it really like safe to really count those premia always being there?

I always go back to being the quant. I started in 2004, building the first quant models. We launched in 2005. By that time, 75% of the market was in the hands of top three players and the whole quant space was less than 10% of the whole industry. 90% was fundamental. Within that 10%, 75% was the top three quantum firms. We were doing a lot of stuff.

We weren’t doing one factor with a simple formula, give it to everybody. And it was brutal to compete. Then, the top three blew up in ’07, and then again in ’09. And then, the whole quant industry went dark for a while until this revival through smart beta enhanced factor investing and ETF, transparency, liquidity, all that story came about, which in one way, we’re all happy, is this old quant saying, “Hey, quant is popular.” On the other hand, I was just going, “Oh my God, how is this gonna play out? Because all of the sophistication we used to have didn’t beat index.”

Our strategy had 125 factors back then, and it continued to outperform for 15 years. It did positive 2007, positive 2009, [unintelligible [00:25:40]. So, I navigated this turmoil of both my firm falling apart, market falling apart, quants falling apart, and just focused on innovation, innovation, innovation. Yeah, that’s why a lot of my blogs come out, evolve and stuff. But why value works? Why anything else works? And sharing with you how I was discovering the early history as if it was live and out of sample, you become really humble and you start to figure out how many ideas do I need to have? How accurate are they going to be? What is my real goal here? Is it to beat my competitors or is it just to at least have one basis point above the benchmark? That was my goal back then, now it’s different. But back then, I was a young quant. There was nobody above me. I was on the hook. So, I just said, “I don’t care about how much I beat this benchmark. I just need at least one basis point a year to say I’m positive.” And it ended up being hundred basis points.

I didn’t care if my individual idea was right or wrong, or Fama and French would laugh at something I did there. I didn’t have to write a dissertation over it or do a mathematical proof. It was intuitive, gut — If I think of it and I test it ad it’s positive, that’s good enough, take it in. Worst case, it is going to dilute the positive ideas with random noise. Absolutely worst case, it’s going to flip and become from a positive t-stat to a negative t-stat, which is really, really unlikely, most likely by data mining too much, it’s going to become random. But because I’m not just pressing buttons, I’m constantly thinking, reading, and innovating, there’s going to be enough of these gems, I just don’t know– if you take a bunch of sand, which one is a diamond and which one is a sand? Only time will tell, as I discovered with these extended decades backwards. So, I had to have enough ideas in there to continue staying positive.

And with value, we’ve seen this with quality. Around 2000, there was a lot of literature, Sloan and those guys in quality factors. It kind of went flat for a while. I remember looking at that, and it was really like an inverted hockey stick. If you did a long-term backtest, it’s the scariest type of outcome. It’s one thing where it just keeps zigging and zagging and then you add other stuff to diversify, that another one is pretty straight and then it just goes horizontal.

Tobias: And why is that? It’s just been flooded with capital?

Mikhail: That was my thinking, yes. A lot of quants were doing it. A part of it is also being a little contrarian– that’s even unpopular. Contrarian, I think, gets misused a lot. It’s like you just contrarian to the market prices. But even contrarian can either be popular or unpopular view in given times. Being unpopular is really, really hard. That’s when you say something and people look at you like you’re crazy. Why are you doing this? It’s much easier– It’s very popular in the spring of this year to be saying, it’s all going to hell, and I have that instinct, I have that bias. It’s a contrarian view, when the market keeps going up.

So, with quality, I looked at it. It wasn’t hurting our models. It wasn’t adding to our models for that early period. I decided to double down research and we went really granular into the balance sheets and cash flows and modeled very subtle things, put it all back together, quality 2.0, backtest got better. And then, I just said if people are going to hate it and see this hockey stick and pull money out, we want to be there, pluses defensive. And then around, ’08, ’09, and actually for many years later, that part of the model delivered a ton of value. So, right now, with value, if you’re a value investor, I just say double down– do your research double down, you’re forward-looking. Definitely don’t pivot out to growth or anything like that at this point.

My thinking led me to intangible capital in terms of value for quite some time, and I think that’s where I’m very comfortable, but let’s say if there was a more fundamental element there like direct, then it’s just about at this point, I think, A, waiting for mean reversion, just natural cycles. B, waiting for enough people to abandon it, which I think we started to see that–

Mikhail: That was fun. Yes, capitulated. [chuckles] And then, there’s the question about just long-run mean to the whole thing. That’s the third equation. But first is writing it, tweaking it, getting upside when it happens. At this point, I would say the odds for the upside for traditional systematic value is much higher than the downside. Of course, very famous people recently made the same statement and go their– [crosstalk] [laughter]