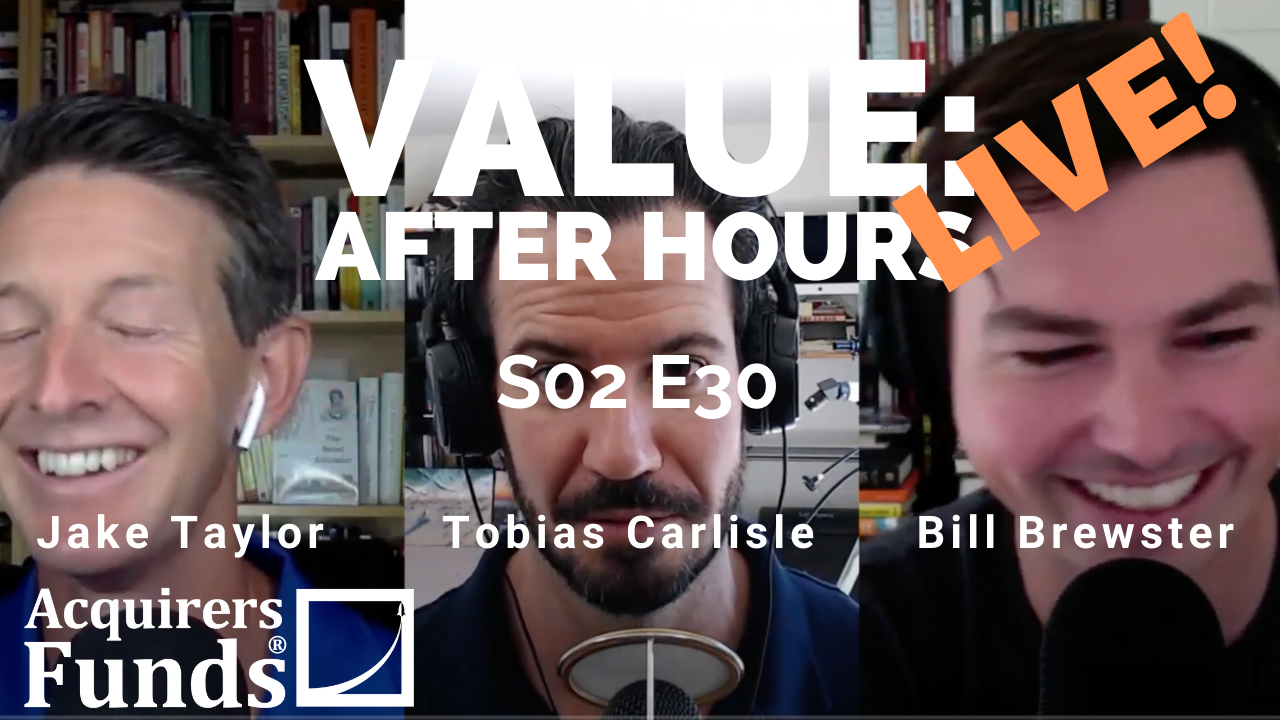 During their recent episode of the VALUE: After Hours Podcast, Taylor, Brewster, and Carlisle discussed ROIC, Returns, And Nose-Bleed Valuations. Here’s an excerpt from the episode:

Bill: This is probably a reasonable time to do the ROIC and return comments.

Bill: Look, we have gone too far with this discussion. I understand that, over a long enough time horizon, your returns will mirror the returns of the business presuming that you pay for growth. Or that the business continues to grow.

When Buffett bought Kraft Heinz, that business printed like $7 billion in EBIT and he paid like $100 billion. Guess what? If it doesn’t make more than $7 billion in EBIT, it doesn’t matter what the returns on capital are. You’re not going to earn more than your earnings yield on what you purchased. The way that I think about it is you get the weighted average of your purchase price-earnings yield, plus how the business grows over time. Whatever the earnings growth is over time, you are accumulating the business’s return in that– like in the incremental earnings. But you can’t egregiously overpay for an asset, hold it forever, and argue to me that you’re going to get the assets return. It’s just not how the math works. A lot of your return is on so far out, it doesn’t even matter down the road.

Now, I agree that in a world where multiples continue to expand that thought has not– there’s never been over the past, I don’t know, 10 years or whatever, you haven’t had to worry about the multiple coming in on you. So, from an IRR standpoint, yeah, you buy it, it grows at a certain rate, you flip it at the same multiple, maybe it expands, your IRR is better than what even the business returned or whatever, but you just can’t– If you listen to what Buffett said about Kraft Heinz, I think it was two years ago, or two interviews ago now, after our meeting. He said he’s like, it’s only going to earn $7 billion, the business is still a fantastic business. Look at the returns on capital. He’s not going to–

Jake: We paid too much, that’s what he says.

Tobias: What did he expect to have happen and why didn’t it work out?

Bill: I think what he thought was I think that he was relying a little bit too much on legacy distribution advantages. I think he underestimated the risk of private label taking share. And I think he thought the entity would grow a little bit more. If the entity grows and the returns on capital are what they are, you can pay $100 billion for $7 billion today. But if the entity doesn’t grow, it doesn’t matter if the returns on capital are good. You’re fucked.

Jake: And that’s the lesson, I think, for everybody is that you have to be right about that, what does the future look like for this business, for that to have been an appropriate price to pay. Even somebody like Buffett, who’s been watching consumer goods for 70 years now, can swing and miss on something, like you can too. So just because the multiple has been very favorable for you or the expansion of that over the last 10 years, does not necessarily a genius make and does not necessarily mean that you’re going to get the same result over the next 10 years.

Tobias: Do you think he expected 3G to chop a lot of cost out and to make that look a little bit better than it actually was?

Bill: I don’t know. I think that he and 3G both made an error thinking that you didn’t need– Jorge Paulo Lemann said this last year, he said, we were dinosaurs. I just think that they overweighted legacy distribution advantages, and they got caught. I don’t think either one of them has been particularly good at pivoting their minds. Berkshire has seen it throughout history with like World Book, but he sort of knew that that erosion was coming. But I just think maybe they overweighted the incumbent advantage.

Tobias: It’s tough, though, right? Because you would look at that very long history of growth in those goods and you’d say, “Well, we’re going to stumble up and down a little bit, but roughly, this is probably what we’re going to continue to do.” Because the private label stuff was– who really foresaw that happening? Maybe there’s a whole lot of VCs out there who funded and who knew it was coming. But I didn’t think it was obvious. We still shop at–

Jake: The VC of Costco?

Bill: Private label, you could see that coming. I don’t think that was that hard because I was banking in food when that was really taking off and it was steadily taking share. I do think it grew much bigger than people thought. And Kirkland has objectively become a much bigger brand than I think even the most bullish Costco investors would have projected.

Bill: Yeah, I think private labels are much bigger.

Jake: Are you buying your sliced cheese off of direct-to-consumer Instagram? [laughs]

Tobias: No, but I buy a lot of stuff over there. We shop at Trader Joe’s and it’s all private label. They’re really sneaky. They get something in there that people like and then they tell them– I think they tell the people who make that, “Hey, guess what? Now, you’re making it for us and you’re making less so, we’re going to stick it under our brand. Cool? What are you going to do?” It’s all margin on sales.

Tobias: That’s it. That’s all I was going to say.

Bill: Oh, all right. This is his exact quote. He said–

Jake: Who is this?

Bill: This is Buffett. “Now, the interesting thing about Kraft Heinz is that it’s still a wonderful business and that it uses $7 billion of tangible assets and earns $6 billion pre-tax on this. So, the assets required to run the business $7 billion, they earn 6 billion roughly after depreciation pre-tax, but we and certain predecessors, primarily we paid $100 billion more than the tangible assets. So for us, it has to earn $107 billion, not just on the 7 billion that the business employs, and we don’t have a way. It would be wonderful if we had a way to deploy another $7 billion and earn $6 billion, but it’s not there.” Right?

This is the whole fucking argument against SaaS that I have. When you’re paying 30 times sales, you’re not earning the return that the business– The business can earn that return. You need the business to earn that times the 30 times multiple of sales that you’re paying. I get they’re great businesses. I get it’s growing [unintelligible [00:24:14] in debt. You’re not some savant for figuring that out.

Tobias: But it’s understandable. It’s just been a market that has rewarded growth with multiple expansion. So, if you’ve had that for a decade– [crosstalk] a decade is a long time. You really think that we’re going back to a value-type market where you get the lower-growing cheaper company does better? That’s ridiculous.

Bill: Yeah, I was asked on one idea. Honestly, it is sort of ridiculous. I guess that the answer for that question is what I think is over the long term, if you hold those businesses and you underwrote them well, and you buy that type of business, you’re going to do better. Do I think that you’re going to outperform over the next year? Probably not. Momentum is probably going to keep ripping and value’s probably going to still get shat on. One year is not an investment career. And then you do it for 20 years event, eventually you get bad stuff that happens. I don’t know where It’s going to happen. I’m not smart enough to figure that out. If I was, I wouldn’t be sitting here.

Tobias: That’s the only Zen thought you have to get to. Once you realize that, then you don’t really care what the stock price does. You’ve just got to watch your own businesses and you’re totally fine then. You’ve reached this sort of moksha.

Tobias: Probably at a premium too, right?

Tobias: But this might be a little bit too much.

Jake: Not the one being presented to you today.

Tobias: Not the one on offer.

Bill: Yeah. I just feel right now these valuations, you’ve seen a cokehead with a bleeding nose and he’s about to fall over and have a seizure, you just don’t know when. You’re like, that’s a nosebleed valuation and it’s not going to end well. You just don’t know how long it can go on before that guy falls over.

Bill: Maybe not a great analogy.

Tobias: It’s the last five shots of tequila at the bar. The first two drinks are great at the start of the night and you wake up in the morning and you don’t even feel those, but the shots of tequila just before you bust out, last call, better get some shots, that’s what ruins the next two days, particularly if you’re my age.

Bill: Actually, at my age, it’s probably the third shot that puts me down for the next day and a half.

Tobias: Yeah, it’s a two-day hangover now. I just can’t do it.

Bill: Yeah, I’m with you. Anyway, that’s my rant. I was very amped up about that rant. Look, they’re very nice people and I think they’re very smart that are making this argument to me, but it’s like, I know what you’re saying, I get it. Maybe I’m the moron. But I really don’t think you’re thinking here.

Bill: I was going to say, and I do get the knock on value. So, that Intrepid Potash that I continue to go back to, that guy had a lot of money, he invested in a shitty business, he’s eroded value, he invested in oil assets. I think normalized, you’re probably going to be able to print $20 million of free cash flow on a $105 million market cap but I could be off on that, whatever, do your own work. Bottom line is that guy has lost a lot of money. He has misallocated capital for a very long time. That asset should trade at a discount because there’s nothing to convince me that you’re going to get the capital out.

In that sort of a value trap pitch, I get why people say it’s a trap. In stuff that like Toby’s buying where you have buybacks as a catalyst, that’s a different argument. You’re drawing the cash out of the business today. It’s not some hope.