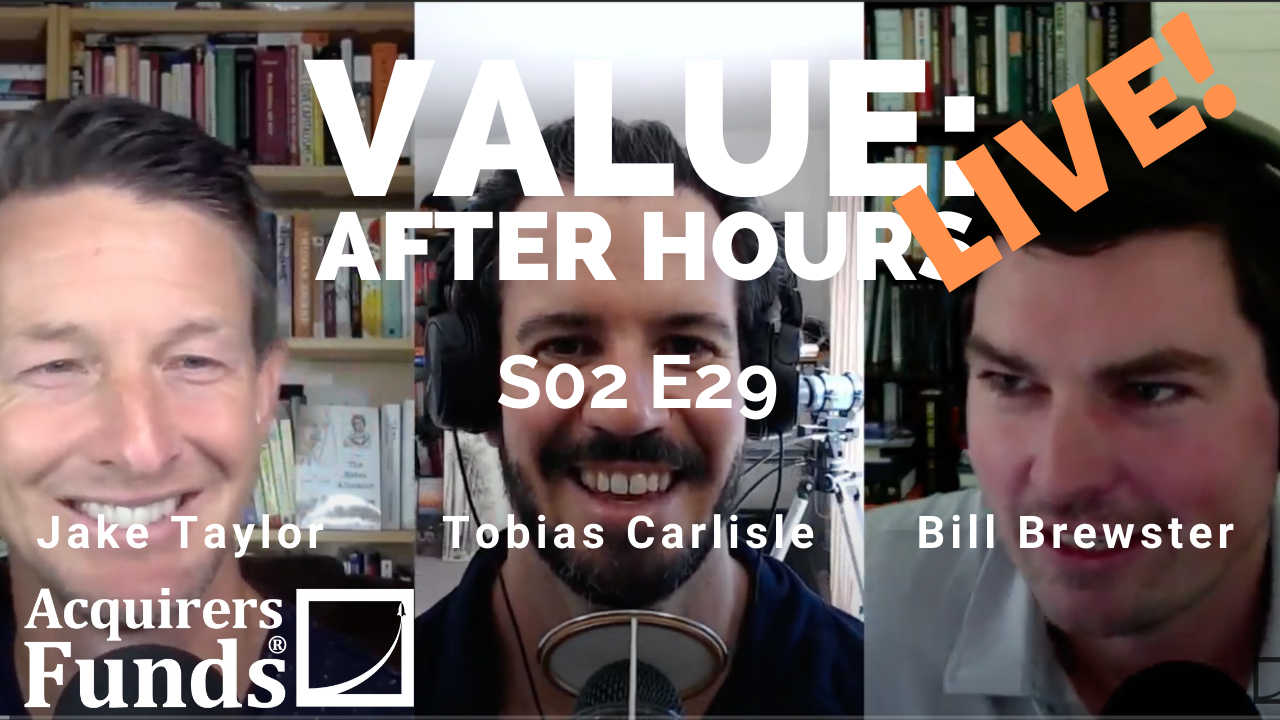 During their recent episode of the VALUE: After Hours Podcast, Taylor, Brewster, and Carlisle discussed David Einhorn: Before and After. Here’s an excerpt from the episode:

Tobias: How do you think about historical track records? Seems like folks with long-term returns like Tepper, Ackman, Buffett, Klarman have long periods of time with weak or negative returns. That’s a good question. I like that question.

Bill: I like the question too. I don’t know what the question is getting at. I think if you’ve listened to our discussions in the past like– Jake, I think you like Einhorn right now, right?

Tobias: I might be more bullish Einhorn than Jake is.

Bill: Yeah, I know you’re not. I guess what I’m saying is, like you guys, when you have said that you like certain investors right now that are out, sort of down in the dumps, it’s because you respect who they are and their process and the research they put out. I’m inclined to feel that way too.

The problem with looking at track record is it doesn’t matter until the end. I also think– I’ve been pretty vocal about liking Markel, I think Gayner’s record is pretty good. I have owned Berkshire because it’s a bet on what I think that company has achieved with them and who I think they’re hiring. So, I incorporate track record, and I use it more as a leeway thing. Like Charter, for instance, Rutledge has a pretty good track record in cable. So, if I disagree with his decisions, I’m the one that’s probably wrong. So, I give deference to track record.

Tobias: I do think it’s striking. It’s almost like Einhorn is two different people from the first decade of this millennium.

Tobias: Finkle and Einhorn. The first decade of this millennium. He was outperforming on a yearly basis by 24.5%, which is just absurd. If you’re putting those up as standalone numbers, those would be absurd numbers, but to be outperforming by that number is ridiculous. He runs it from 96 to 2007, just turns on these spectacular returns. Since then, he’s underperformed by– last time I looked, it was a little while ago, now it’s a few years, but I can’t imagine it’s got better over this period of time. If anything, it will have got worse was. He was underperforming by 6% a year, something like that. It’s hard to believe that it’s the same person.

Bill: Dave, get on FinTwit, bro.

Bill: [crosstalk] –stuff. He needs to get along all these with all these SAS names. What’s wrong with this guy?

Tobias: CorporateRaider says he was mega long Apple but sold.

Tobias: Yeah. An accompanying question. When is a long enough timeframe to determine if an investor is making good returns from luck or skill? It’s hard. I think Corey Hoffstein said 80 years for a factor. No one’s ever going to show but I’ll be inclined to say that Buffett’s probably got some skill.

Jake: You think? [crosstalk] Of course. It’s not just the years though, it’s how many market cycles. I think that’s important. Theoretically, guys should be growing as they’re going as well. These aren’t static things any more than I hope that the three of us aren’t static and how we do things. We’re trying to get better all the time. Maybe if you’re on a steeper growth trajectory as far as understanding, maybe you missed the first cycle, you didn’t do real well, but then the second one you’re going to do even better. This whole idea of static measurement is– I’m a little against it in that way.

Tobias: Howe Street says, Einhorn used to do in-depth DD. Now he’s a quant. I’ve never heard that before. What’s your basis for saying that?

Bill: Yeah, give me your basis. What’s your basis?

Tobias: Well what’s the evidence? How do you know that, is what I’m saying. You object to the way that I’m saying that [unintelligible [00:44:19]

Bill: No, I don’t. I just liked it. I was just piling on. Didn’t he write the book, Fooling the Street Some of the Time or Fooling Everybody–

Tobias: -Some of the People All of the Time. Yeah, I remember one of those things.

Bill: I think that dude probably does diligence. He just may not be coming up with the conclusions that are working right now.

Tobias: Dude, I’ve told this story a few times, but I was at the value investing–

Bill: He also might be a little too rich. That’s possible.

Tobias: He was going through a divorce or he’s had his divorce, that happens.

Bill: Well, then he might get real good, bet on him now.

Tobias: I think it’s all of those things, that’s all trimming. He’s a deep value guy, and deep value’s just had a very rough run through this period of time. I saw him at this value investing conference in New York. I was sitting beside– name’s just going to escape me right now. But someone who had in back and forth with him about St. Joe’s. When I was long St. Joe’s, it was trading at $22. It looked like it had 60 bucks.

Jake: [crosstalk] –was on the other side of it.

Tobias: Berker was on the other side, but it wasn’t Berker who I was sitting beside. I was talking to– just can’t think of the name right now. Stocks bull and net current asset value was the blog, hasn’t been updated for a long time. He had been long because he liked undervalued land and I like undervalued land at the time too, and we’re both long for that reason.

Einhorn only had the name of the presentation, which was If They Build It, They Won’t Come. And I looked at that and I thought this wouldn’t be another short at St. Joe’s because it’d been shorted like 80 bucks and he’d ridden it all the way down to 20. I’m like, “He’s not going to short this in the hole, is he?” But then, he got up and he gave this presentation. Of course, he was short.

Over the course of the presentation, stock price fell from $20 to $50 to $17 and then proceeded to go lower. But the presentation was 120 slides of them having driven the streets of St. Joe’s holdings. They’d gone through their accounts in a forensic. They’d pulled them to pieces. It’s the most in-depth presentation I’ve ever seen anybody give, probably even since then.