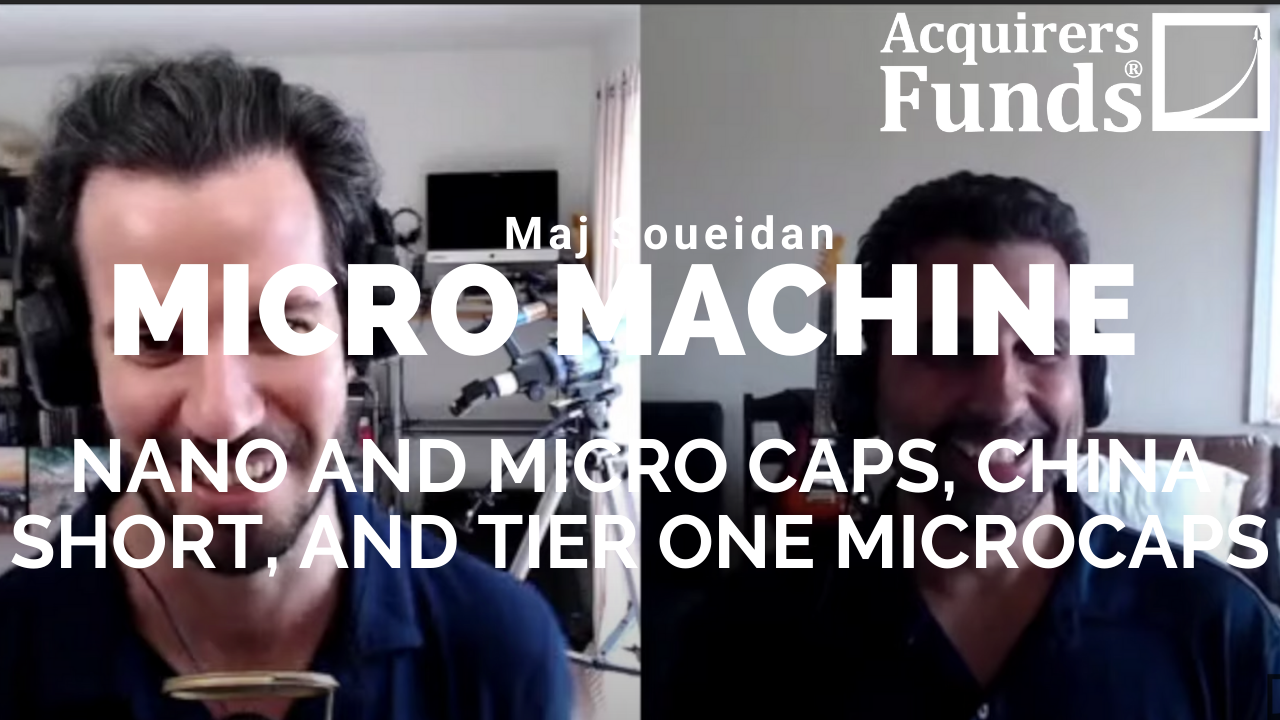 During his recent interview with Tobias, Maj Soueidan, President and Co-Founder at Geoinvesting discussed Finding Great Opportunities In Tier One Microcaps. Here’s an excerpt from the interview:

Tobias: It’s been a bit of tough time to be a small micro-cap investor. It’s such a beaten-up, bombed-out part of the market at the moment. I don’t know if we’re at the bottom, but I think we gotta be the—it’s stretched now. Do you think it’s starting to look interesting?

Maj: Yeah, I do. 2019 was a very interesting year. You started like mid 2019– everything I talked about, this whole like chain of events, making it tough for the micro-cap sector to keep getting the retail investor institutions, well, I think it’s just got to a point where it’s just– the bloating of these big cap valuations, the pump and dump, this whole shit with crypto and [unintelligible [00:40:36] played that the money has to go somewhere now. And then the smart money knows probably at this point– that the smart money’s in this little nano-cap, micro-cap arena, I call them “Tier 1 Quality Companies,” we call them.

Tobias: What makes it a tier 1 quality company?

Maj: There’s like an interesting checklist. If I had to tell you, have some revenue, you got revenue at or near profitability. But one of the biggest of these is capital structure. We’d like these companies to have really nice capital structures where share accounts aren’t bloated. So, in the US at least once, we start getting to this, like, hundred million, I’ll say [unintelligible [00:41:17] companies, it’s been our experience that they’ve just like been at a low-quality micro-cap, it shows that management had that that dilutive stock for years to grow or try and grow and they’ve been unsuccessful at it. So, it’s a hint to us.

And then there’s this usual– we want companies that have revenue and are near profitability or at it, that don’t have to continually tap the markets to raise money. And preferably, it’s been around for maybe 10 or actually 15, 20 years, these old school companies. There’s a lot of them out there. So, if you had to [unintelligible [00:41:57] really small or I’ll even put a turnaround company in a tier one if we think it’s going to get to that– gravitate towards that level of confidence.

Tobias: So, 100 million shares on issue, why don’t they just do a share recombination, whatever that’s called.

Maj: Right. So people ask about– so let’s just do that. And what we like to look at too, is how many of those they do. A lot of these companies will keep doing this to make themselves look better. But then we’d look, if these guys have done five reverse splits, we know what they’re up to. The reverse split, issue more shares, dilute the hell again, stock goes down, pump it up, reverse it again, you see a lot of that now.

Tobias: What’s the issue with them? Is it the fact that they’re just not making enough money to– they’re just not getting the escape velocity that they need to justify the cash they got in them or is it that management’s just ripping out too much cash?

Maj: I wish it was like your first thing you said there because that would mean they actually had an intent to grow but I think what it really is, I think it’s a game. I think there’s more money to be made in the pump and dump game for some of these companies than actually running a company. Let’s make ourselves– the pump and dump game has changed so much over time. It’s obviously fraudulent companies that had maybe nothing going on, no revenue with the mailers, pump and dump mailers. Now, it’s actually listed companies that have a pad, have a license, have a product, maybe they realize it’s just too hard to grow anymore. We have this wonderful asset in a public company. Let’s just keep this up, let’s just pump it, make some money, do it again, do it again, rinse, repeat. That’s a theory of mine.

Tobias: I think the pump and dump’s gone up market. I think that Moderna, they released the preliminary results of like a 15-person trial. Then that afternoon, you drop a one and a half billion-dollar capital raise on the market. Well, I’ve seen that a million times before in smaller micro-cap land. I’m not falling for that one.

Maj: Look at genius down here, the GNUS, look at that chart this week. It’s got the Netflix for kids. I think it’s been around for some time, and they had an offering at two, three bucks, that’s 11 bucks today. It went up into the offering, after the offer was announced.

Tobias: This is a very fluffy market.

Maj: You would never see that like 20 years ago, man. Dilution is bad.

Tobias: It is a late 1990s thing. We’re doing a placement, we’re doing an issue, we’re gonna have some cash and all of a sudden, the stock, it rallies on then.

Maj: Yeah, well, it’s been there for 10 years, this whole thing.

Tobias: No news is bad news in this market, like just sending out a press release saying, “Hey, we’re still here,” market rallies on that.