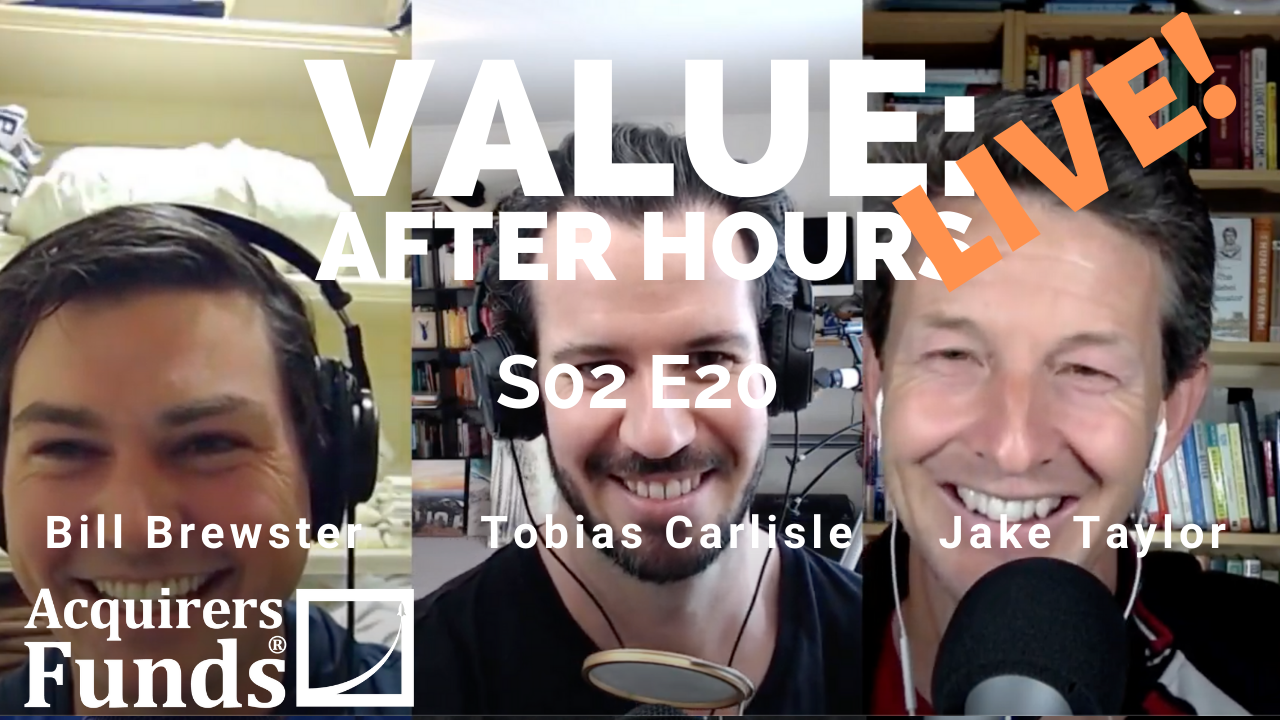 During their recent episode of the VALUE: After Hours Podcast, Taylor, Brewster, and Carlisle discussed You’re Confused Right Now? You’re Not Alone. Here’s an excerpt from the episode:

Bill Brewster:
Yeah, no doubt. Well, good. I’m going to get into more of it. Because, I’m going to talk about how confused I am. What is so difficult to square right now as a human for me, right? Maybe I just have like a pea brain, but I watched buffet and I think I’m not the only one that’s confused is, I get that people are saying, look at the last quarter and look at how some of these tech companies grew last quarter. And I get that the economy has not stopped. Right. But let’s think through, how quick can unemployment, how quick this employment come back? And in a world where certain policy proposals are at least being floated where school may or may not happen next year. That’s not like common, but it’s out there in a world where you can’t hire fundamentally enough people because your restaurant can’t get to the capacity that is required. In a world where United is saying, “Hey, in October, once this payment or payroll protection long rolls off, we may decline by 30% the amount of pilots that we have.”

Bill Brewster:
How does capex on the business side? Like how does that ramp and what are all the multiplier effects of all this velocity coming in? I have no fucking clue how we make it out of this okay. Other than like blind faith, it’s just hard, man. And I don’t want to be like I really want to be careful not to get to Jake. I like that. You got your trying emoji. I really don’t want to get into some like bear rant and I want to be rational about it. And I sit on Twitter. It’s not impossible for me to be optimistic here, but man, is it hard? And it’s really hard when I read, I’ve gotten privy to a couple of real estate conferences like Barry Sternlicht. He is, I think you would be hard pressed to qualify him as bullish, Sam Zell, like all the OGs are really worried right now.

Tobias Carlisle:
Need some young gunslingers to come in here and really mess it up for you.

Bill Brewster:
Yeah. Well that’s the knock, right? Like they don’t understand how the world works now, but it’s like, I don’t know, man. You want to, I mean-

Tobias Carlisle:
You need to get [inaudible 00:28:50] get a couple of young guys who aren’t scared. Come in and just rip that seven billion up for you.

Bill Brewster:
To be fair, I think it was March 12th or 13th or something. I said, I think that there are certain things that are cheap, but the world has changed a lot since then. I mean, we have had quite a rally and a lot of stuff. So now it’s not as cheap as it was to say the least. So I don’t know. I mean, how do you guys think through that? How do you even start to build the thoughts?

Jake Taylor:
So I think if you’re going to be listening to other people in times of high uncertainty, you probably want to air towards the older people, near all other things equal because one, they’ve seen more things. And the fact that they’ve survived enough to make it to this time period, at least tells you something about the resilience of how they’ve handled things. So if I know nothing else about them, I think you probably want to favor the old lion a little bit. Because you know that he got here, he’s stood up to some tests to get here. So when guys like Zell, and Buffet are concerned, I think that should make everyone scratch their head a little bit and maybe back off the animal spirits that they might be feeling. But, [inaudible 00:30:12].

Bill Brewster:
Why we throw them alone in there. Right.

Jake Taylor:
Pretty much anybody who’s been around for a while. Have you seen anyone older who is bullish right now?

Bill Brewster:
No. Not really. I’m sure there are some people I mean in the middle of March-

Tobias Carlisle:
Through that to the crowd.

Bill Brewster:
Well, John Rogers had come out and he said that he thought it was a generational buying opportunity. I mean there are a lot, but again, March is a lot different than right now. [crosstalk 00:30:41]. Yeah. I mean, things changed. And I also want to be really careful with myself of not being like too focused on short term fears and for going longterm thinking. But the way that the Lollapalooza of all this and how it could unravel on the downside has a very legitimate chance of impairing longterm growth. It’s not just like a short term quarter concern, right?

Tobias Carlisle:
Dividends went back to where they were by 2027. So it’s not impaired forever. It’s just like seven years.

Jake Taylor:
Longterm growth. I’m worried about the asset value of things already in the ground. I mean more or less is anything growing.