Is value a value trap?

Is the strategy itself destined to lose ground to the market while it gets cheaper, forever?

In practice, the drivers of returns to value tends to be lower multiples moving towards average multiples, despite depressed earnings tending to deteriorate. (Relative to glamour stocks, value stocks tend to have depressed earnings. Over the holding period the earnings tend to deteriorate further. See OSAM’s Factors from Scratch for more.) But here’s value’s one, simple trick: Multiple expansion tends to more than make up for the deterioration in the earnings.

The reason for the continued existence of the apparent margin of safety opportunity in value stocks is open to debate. The behavioral argument made by Lakonishok et al in Contrarian Investing (1994) relies on “naive extrapolation”–investors extrapolate trends in fundamentals and prices too far. Either those naive extrapolation investors ignore the propensity for mean reversion, or themselves create the conditions for mean reversion (or some combination of both). In their Cross-Section paper (1992) Fama and French make a “risk”-based argument that holds value stocks are riskier. The apparently higher returns are merely compensation for the added risk. I prefer the behavioral argument, but can’t rule out the risk argument. (The debate is a good example of Sayre’s Law. Another example can be found in the discussion over the merits of different valuation methods.)

The value strategy has outperformed over the data we have, with notable periods of underperformance. That proposition has been established many times. See, for two simple graphical examples, the two charts extracted below (from posts on the French data on cash-flow-to-price, and the earnings-to-price).

Both value portfolios are still materially ahead of glamour over the full period (relative performance in blue), but the underperformance (in orange) is deep and extended. But value portfolios formed on price-to-earnings stopped outperforming the glamour portfolios in about 2005. Price-to-cash flow value made it to 2014, but has really lost ground since. 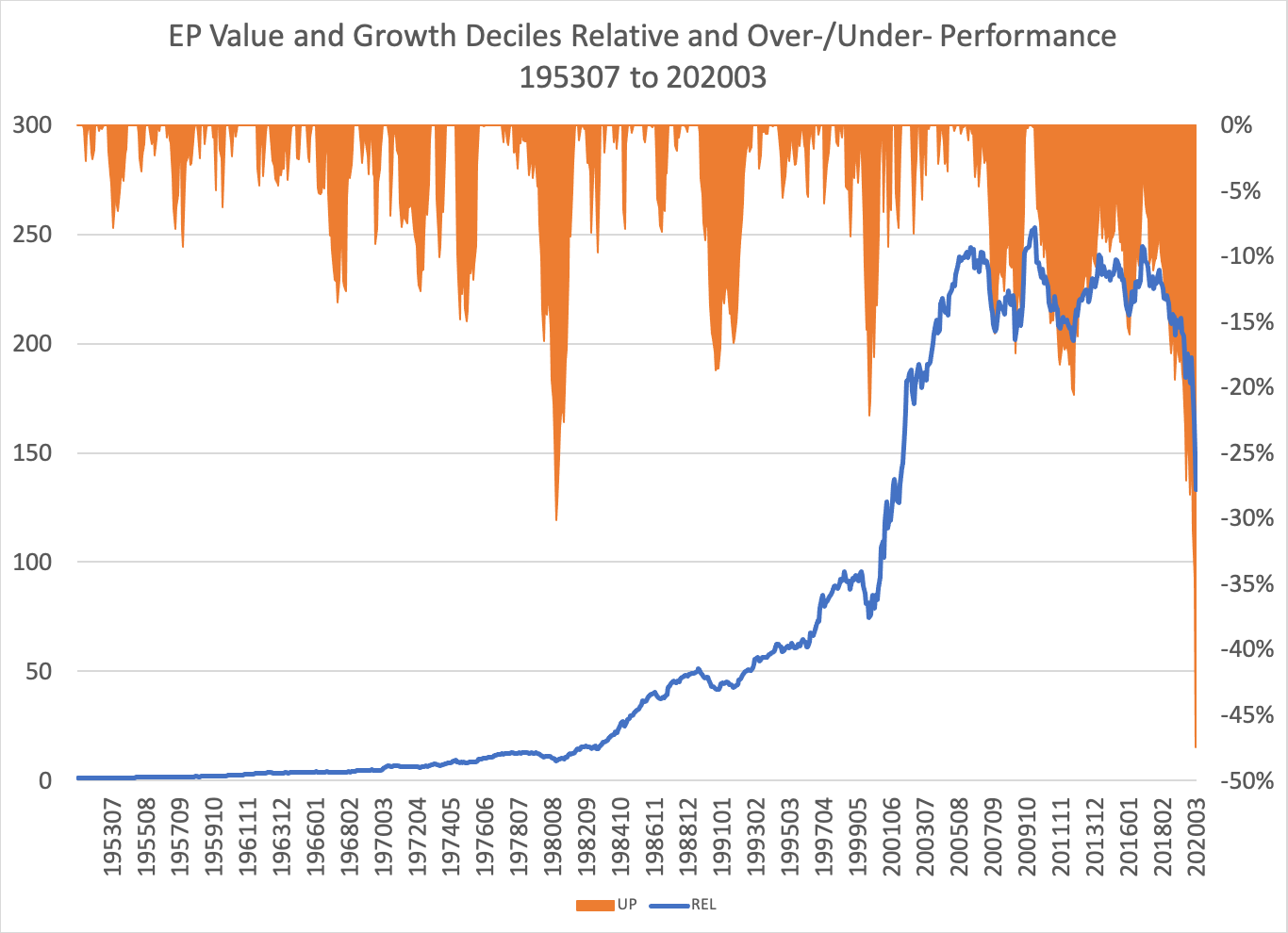 Relative performance (blue, left-hand side) and underperformance from the nearest peak (orange, right-hand side) of equal-weighted decile portfolios formed on price-to-earnings from 1953 to March 2020 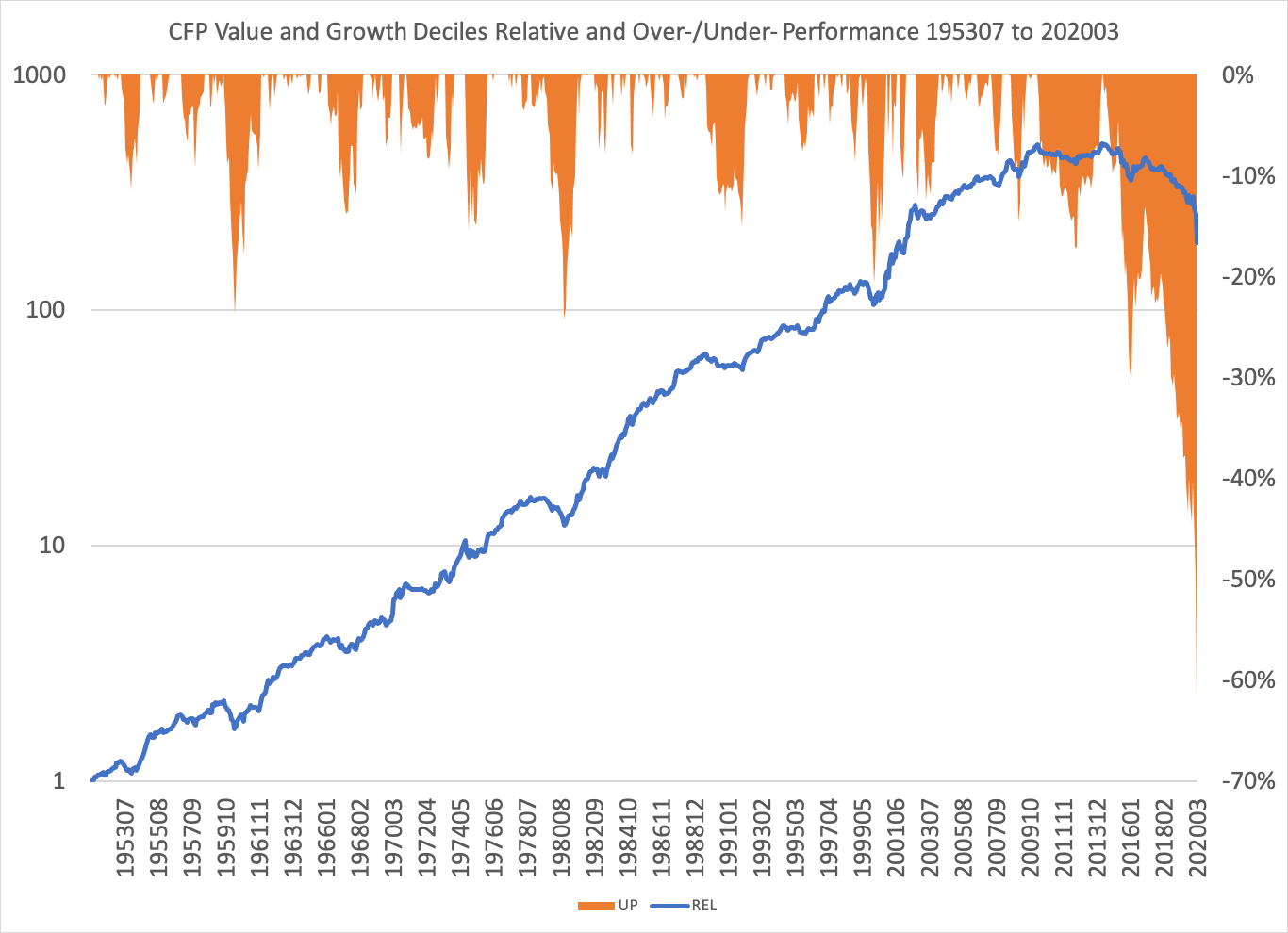 Relative performance (blue, left-hand side) and underperformance from the nearest peak (orange, right-hand side) of equal-weighted decile portfolios formed on price-to-earnings from 1953 to March 2020

However it is measured, value is mired in an extended period of underperformance. It has lasted 6-to-10 years to date. Naturally this has led to the question whether the strategy itself will ever work again. Or, in the instance of book value, whether it did in fact work at all. (Yet another example of Sayre’s Law. Corey Hoffstein has a good discussion in Factor Fimbulwinter.)

Why has value underperformed recently?

The reason value has underperformed recently is because cheap stocks have gotten cheaper. It’s no simpler or complex than that. Prices have fallen relative to fundamentals.

As they have historically, the earnings of the recent portfolios of value stocks continued to deteriorate. The difference this time around has been an absence of multiple expansion, which is the usual case. It is a story of multiple compression, rather than poorer than usual fundamentals. (OSAM discuss this in the same paper above.)

It’s not the fundamentals. Earnings have not deteriorated at an unusually rapid pace. As AQR’s Cliff Asness has shown, stocks in the value portfolios aren’t unusually low earning or levered. It’s multiples all the way down.

As an aside, the designation of stocks as “value” or “growth” usually induces a comment to the effect that “growth is a component of value.” This is true, but unhelpful, and the last time I’ll refer you to Sayre’s Law. The reason for the “growth” appellation is as follows: the high prices paid for the fundamentals of growth companies imply the market expects, all else being equal, higher future growth in those fundamentals relative to other stocks. Empirically, that turns out to be the case–they deliver higher growth (see the OSAM paper). The reverse is true for value. The market expects low or no growth, and value delivers. But it confuses the issue, so I designate stocks with high prices-to-fundamentals “glamour,” and stocks with low prices to fundamentals “value.”

Why is the spread so wide?

The present bifurcation in the market is between high-growth glamour stocks, to which the market has recently been awarding ever higher multiples, and low-, or no-growth value stocks, which are seeing multiples compress. That might sound like the way things ought to be–higher growth should get higher multiples–but, historically, investors have tended to overpay for high growth, starting with multiples that are too high, and been punished with multiple compression. (Similarly, they underpay for the fundamentals of low-, or no-growth value stocks, starting with multiples that are too low, and are rewarded with multiple expansion.) As the OSAM and AQR papers demonstrate, historically, it is unusual that high multiples continue to expand. But that is the case recently.

What has changed over the last 6-to-15 years is that glamour stocks, which have tended to exhibit increasing earnings, and multiple compression, have seen the multiple expansion. And value stocks, uncharacteristically, have endured the compression. An extended period of both multiple expansion and rising earnings has driven glamour stocks to unprecedented levels of overvaluation. And simultaneous multiple compression has seen value stocks fall to rare levels of undervaluation. More on this shortly.

This has created an unusually wide spread in valuation between undervalued stocks and glamour stocks. AQR and Cliff Asness have examined this comprehensively. (There’s really nothing to add to the spread discussion. If, having read Cliff Asness’s paper, you have ongoing concerns about the leverage in the value portfolios, focus on the measures below that use enterprise value, which captures the impact of debt.)

The spread drives returns for long/short portfolios. It’s a useful indicator. In 2014, my Value: After Hours podcast co-host Jake Taylor pointed out in real time the tight value spread had created the worst opportunity set for value in 25 years. Value’s woes since are well documented on this site.

Now, the reverse is true. An extremely wide spread indicates the best opportunity set for long/short value, well, perhaps ever.

The spread is less relevant to long-only value investors. But the news is good there too. As value has underperformed, the long leg of the value portfolio has gotten cheaper.

It would be very bad news if that was not the case because it would mean value has stopped working.

But that is not the case, as we can show below.

The charts below show the value decile of various fundamental metrics plotted against their own average. (To eliminate any look-ahead bias in the average, it is calculated as a rolling-average that adds additional data at each point in the series from month-end January 31, 1992 to April 30, 2020.)

The metric has been richer on one other occasion, the penultimate month-end in the data: March 31, 2020. 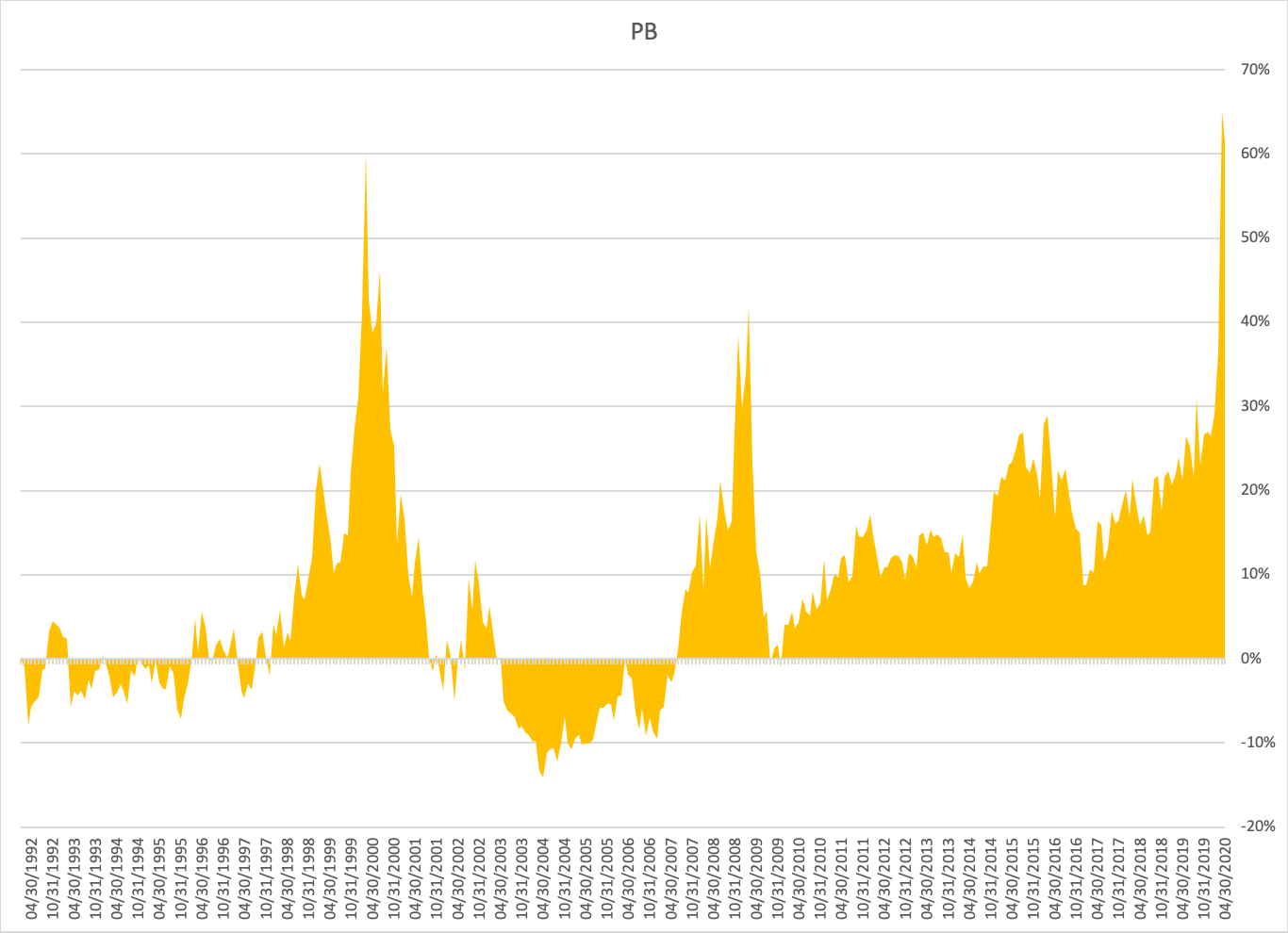 Whether book value can rise again is open to debate. The issues with book value are well covered elsewhere (see OSAM’s discussion for a good summary). But it’s not possible to rule against it conclusively on the data we have, as Corey Hoffstein’s post demonstrates.

Unblemished by all the accounting jiggery-pokery that goes on as we progress down the income statement, price-to-sales is thought to give the cleanest look at the price-to-flows.

The metric has been richer on twelve other occasions (fewer than 4 percent of months) in the late 1990s and early 2000s. 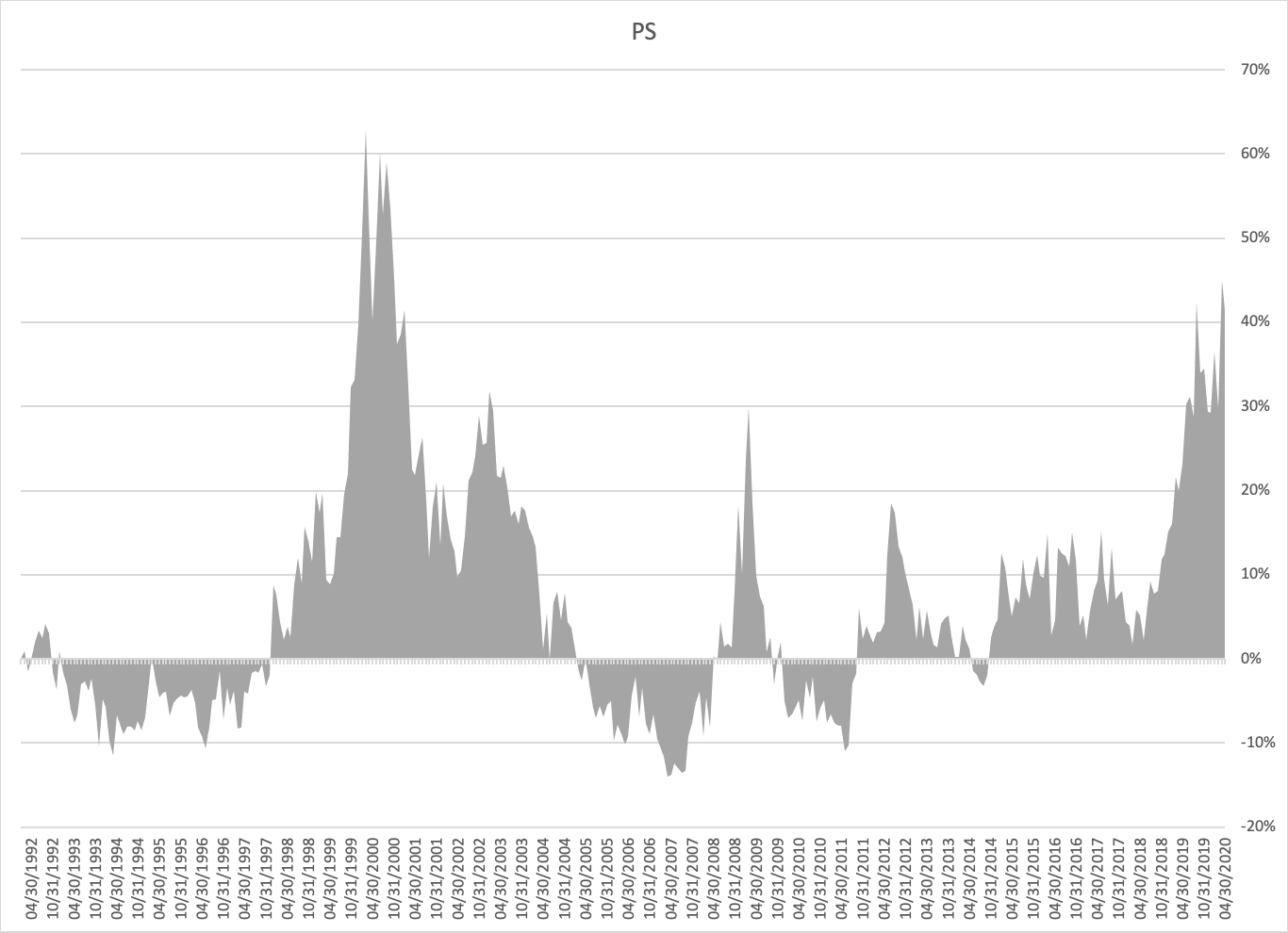 Price-to-earnings shows the price paid for each dollar of profit, the measure that matters. 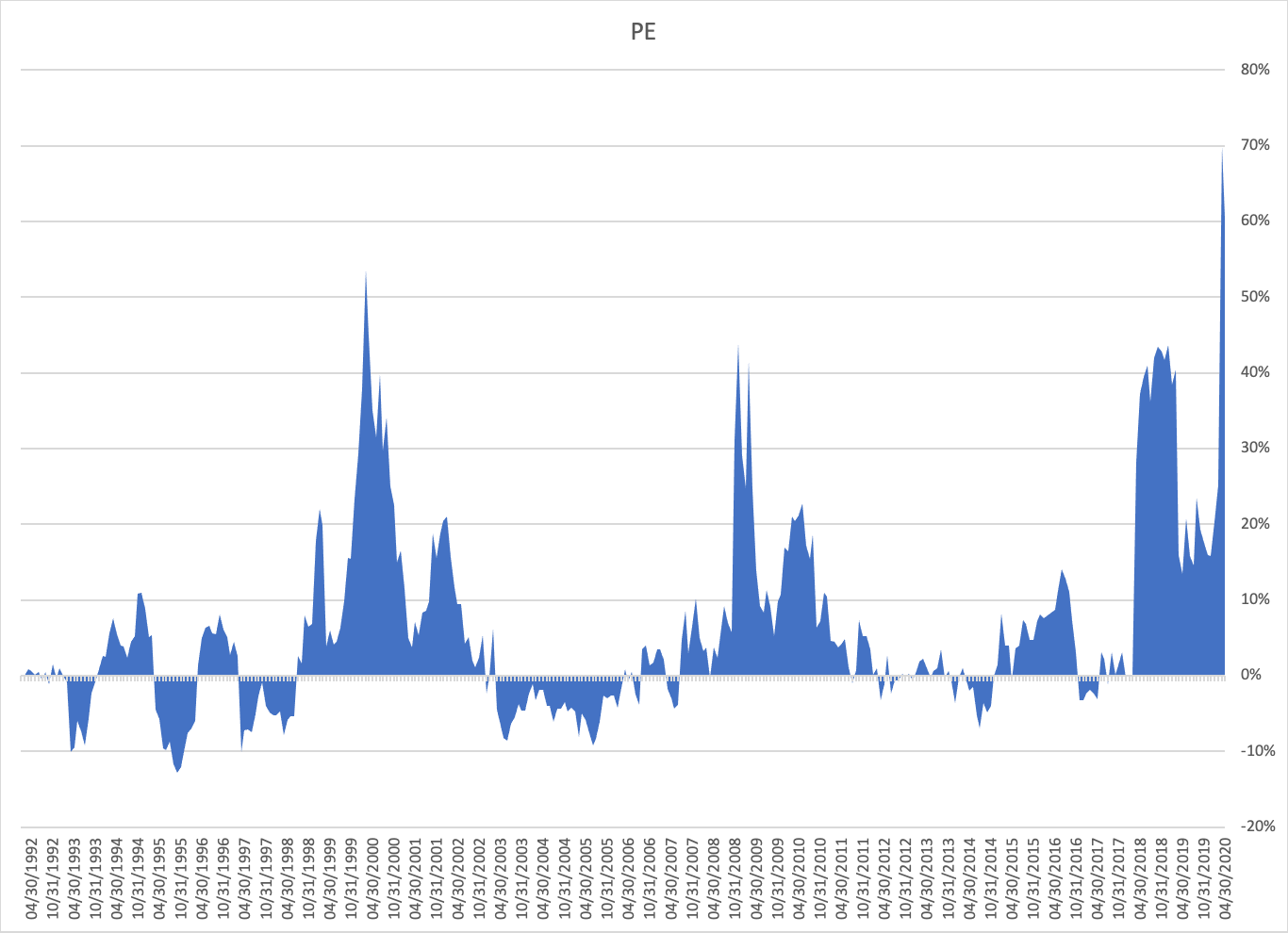 This is the flow metric that measures what really matters–cash flow–because you can’t eat accounting earnings. 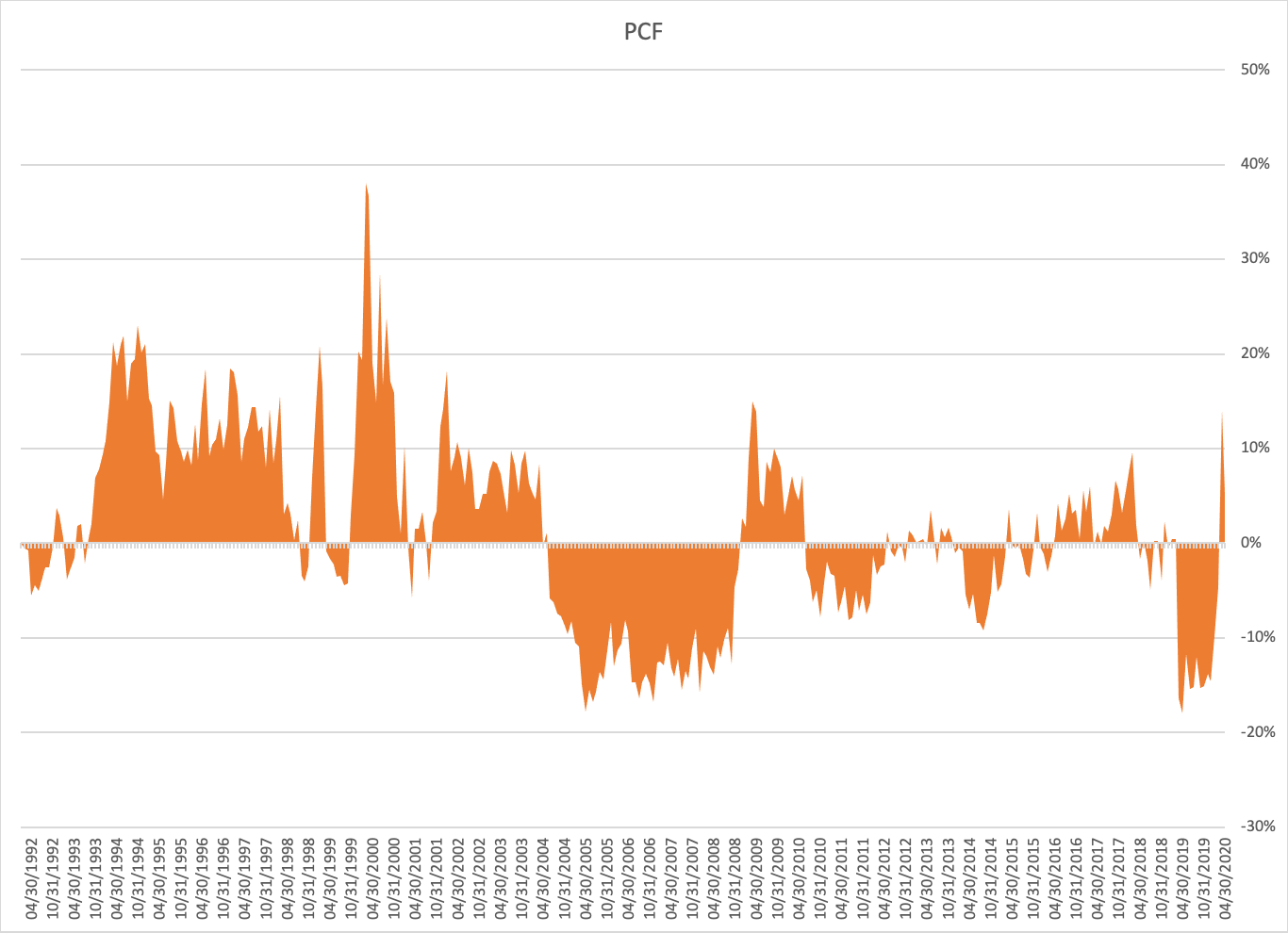 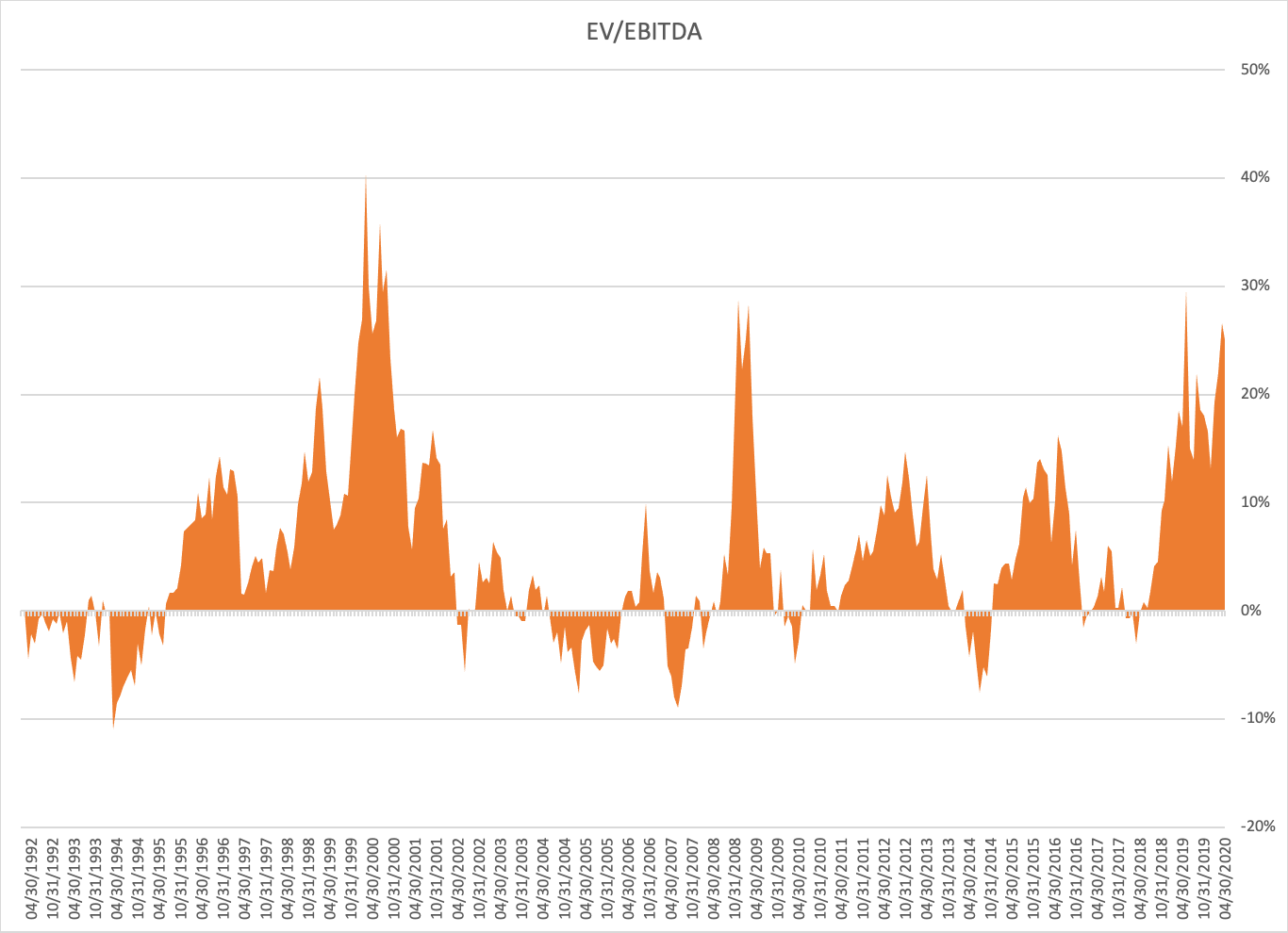 Like EV-to-EBITDA, EV-to-EBIT uses enterprise value, and compares it EBIT, an another measure of operating earnings that excludes depreciation and amortization. In Quantitative Value we found this measure to be the one that had performed best over the full data set. This is a close proxy for the acquirer’s multiple. 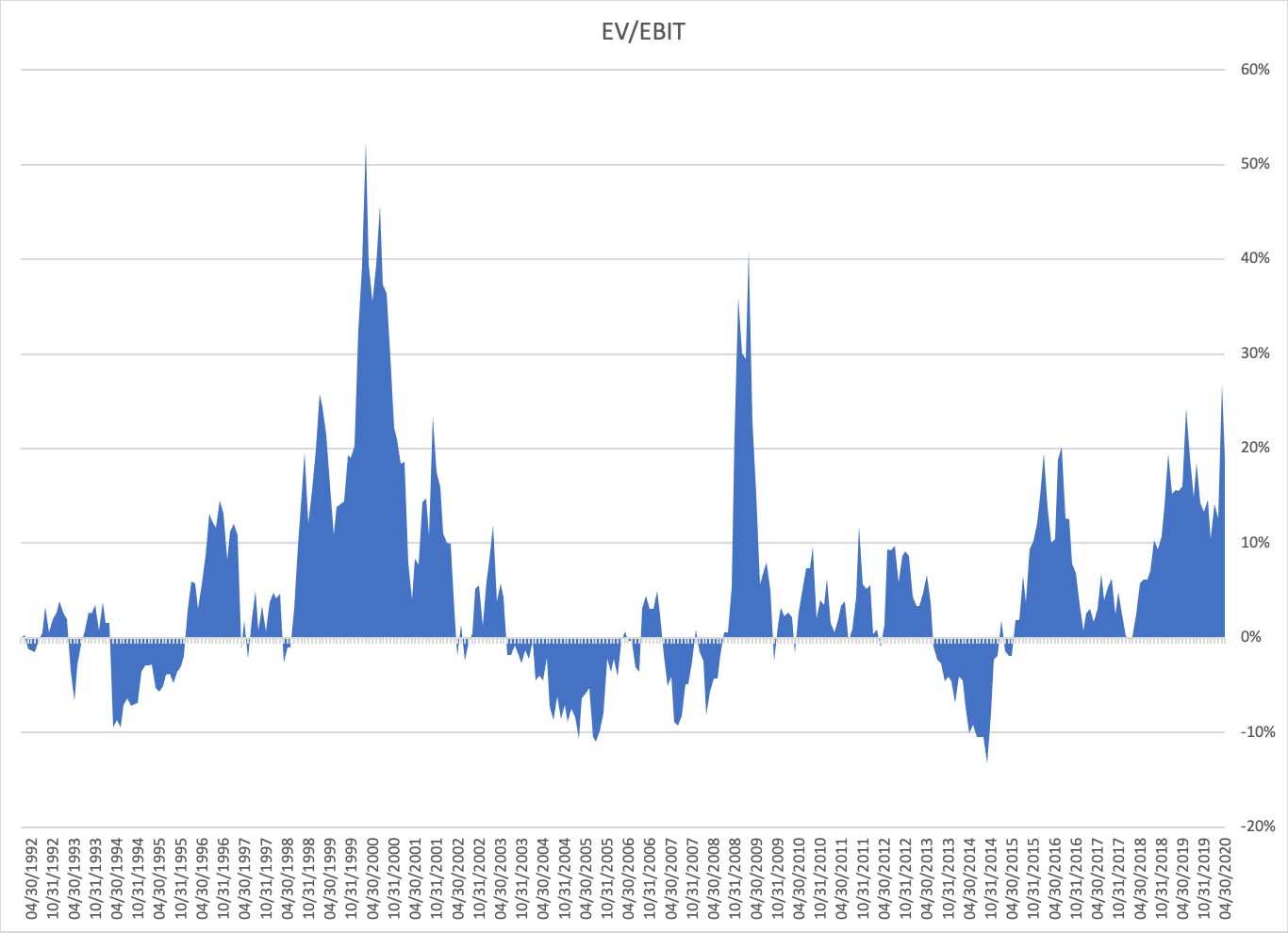 There’s some disagreement between the value metrics above. Book value and earnings suggest value presents an unprecedented opportunity now. Cash flow indicates a good opportunity, but is only about 5 percent rich (still, better than two-thirds of the points in the data series). The others fall somewhere in between. What do the metrics indicate in combination?

The current Combo score of stocks in the value decile is about 35.5 percent richer than its average over the full set. 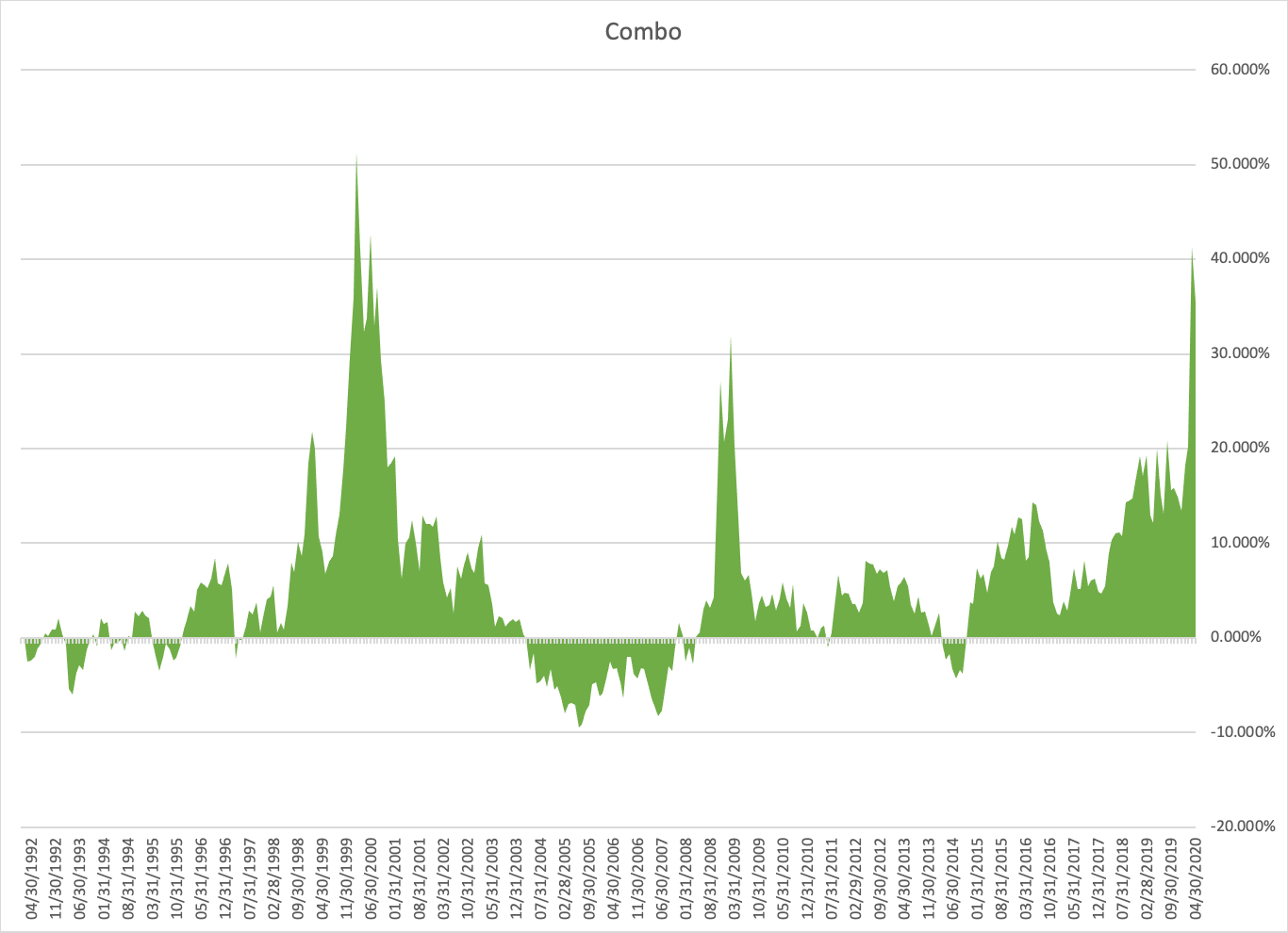 The Combo value measure is imperfect, but a better representation than any single metric of the way the average value investor thinks about stocks–not on the basis of any single metric, but by employing a more holistic examination of various fundamentals. Empirically, it renders roughly the same answer many have intuited–that value is currently an unusually good opportunity, and close to, but not better than, the 2000 extreme.

(We could go further, examining the health of the balance sheet, and the business, and most do, but these are properly the province of “quality” factors, and outside this discussion. If you want to see the impact of the full suite of value and quality metrics on the value spread, check out Cliff Asness’s three recent posts on value and the paper.)

As long-only value has underperformed, the stocks in value portfolios have gotten richer than usual, and the opportunity has gotten commensurately better. Historically, unusually cheap stocks have been followed by higher than average future returns for long-only portfolios. Value stocks are currently unusually cheap to their own averages.

The value spread is unusually wide, and stocks in the value portfolio are unusually cheap. Opportunities like this one are rare. The last time the opportunity looked similar to now was at the 2000 Dot Com peak. Following on from that peak, value had an unusually strong run from 2000 to 2007.

The caveat is the 2000 valuations and spread aren’t necessarily the end point. There’s no reason value can’t get cheaper and the spread widen. If that happens, the opportunity continues to improve, but it will underperform while it does so.

The challenge for value investors is the best returns to value strategies–above-average returns–have all emerged from the times value has underperformed. Now is such a time. Hold hard.

5 Comments on “Is value a value trap?”