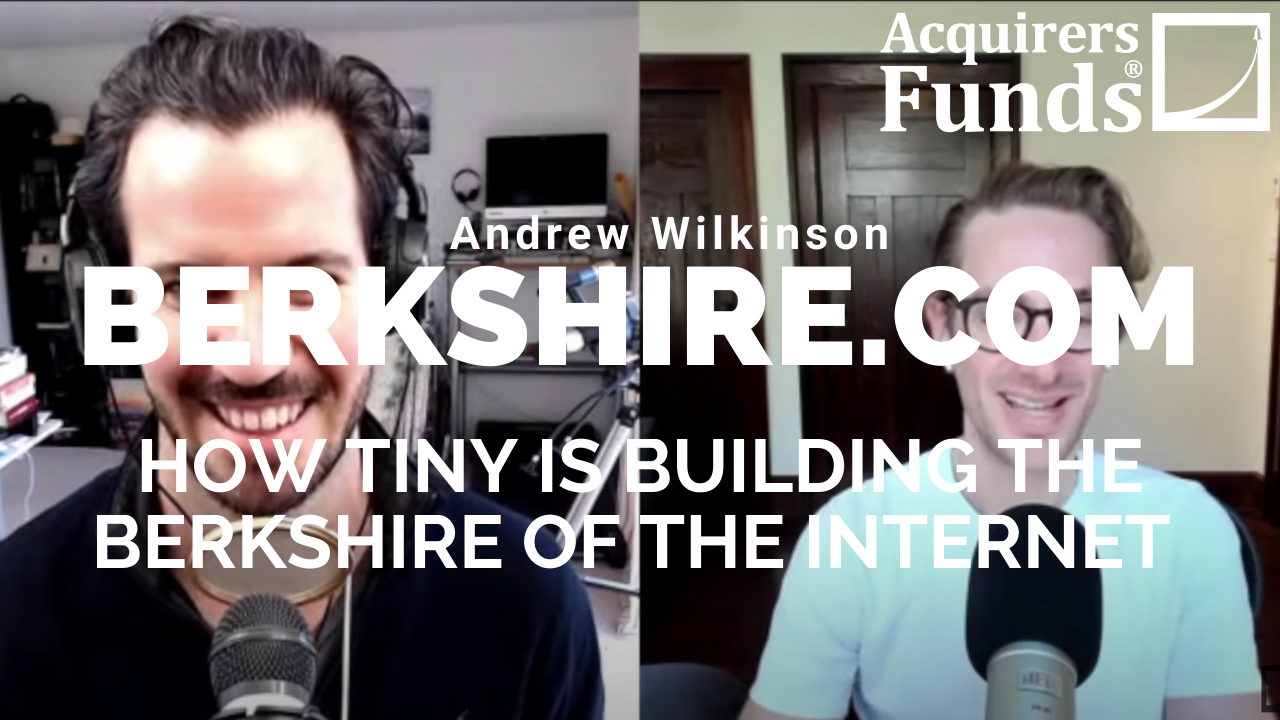 During his recent interview with Tobias, Andrew Wilkinson, co-founder of Tiny, discusses why there’ll be a lot of opportunities to restructure venture business in the next six to twelve months. Here’s an excerpt from the interview:

Tobias Carlisle:
Is that in response to the volatility in the market, or was that something that was planned prior to that?

Andrew Wilkinson:
No. Literally I got a call from an investor I know, and he just said… He had called me before about investing, and we’d done one deal before just as partners. He said, “You’ve got to raise this trust fund.” It’s just a complete no brainer. We’re just seeing, we think there’s going to be a lot of opportunity in the next six to 12 months.

Andrew Wilkinson:
It’s been interesting because you get people where they come to you and we’ll say, “Okay, we would pay eight times free cashflow for your business.” They go, “Well, my biggest competitor, which is venture backed, raised five million dollars at a $300 million valuation.” We say, “Yeah, but they sold minority pref equity, and that’s very different, and they’re doing venture, you’re a bootstrapped business.” I think one of the challenges for founders is they don’t really understand the finance world sometimes. They’ll see these crazy headline numbers not realizing that the founder has basically sold their soul and put a gun to their head and said, “I’m going to deliver a 50 X return or else.” That’s been a challenge in this market.

Andrew Wilkinson:
I think everyone’s just been so optimistic for so long. People are just a little more conservative about the stuff they’ll accept. But I think that we’ll see some opportunities over the next six months, certainly in the venture world, because I think a lot of these companies will not be able to raise their next venture round. But there’s a lot of exceptional businesses that have been built, they’re just not venture skill. They’ve got a good business model. They’ve got a profitable, like on a gross margin basis they’re very profitable, but they’ve got a very bloated cost-based, because they’re based in San Francisco, and they have a huge team and fancy offices and stuff. We think there’ll be some opportunities to restructure venture businesses and give them a good home, and that’s part of what we’re looking at raising for.

Tobias Carlisle:
What industries and sectors do you think are the most interesting right now? You don’t think in those terms, you’re just looking at whatever comes in the door.

Andrew Wilkinson:
We’re pretty much looking at everything that comes in the door. I’m a big fan of online communities and digital goods. For example, we have a business that sells Shopify themes and Shopify apps. It’s one of the best businesses in the world. You spend 30 to $50,000 developing a theme, and it’s just code. Then you sell it, sometimes hundreds of thousands of times for 300 bucks a pop. It’s very, very high margin. You’ve got lock-in into an ecosystem in Shopify. Businesses like that are super interesting at times like this, because I think that when people are financially constrained, they start thinking about, okay, well how can I make more money? People get more entrepreneurial. Then also a lot of habits are being changed right now around retail, so people can’t shop in retail and so they’re shopping online.

Andrew Wilkinson:
Shopify is naturally getting boosted significantly by this as people start stores, and try to diversify their income. Right now we’re asking ourselves what doesn’t change? What can exist in this new economy where everyone’s stuck at home? For the most part, we’ve been quite fortunate that most of our businesses participate in this new economy. But we’re having to think a lot. We just lost a deal that was very interesting, but we just couldn’t wrap our heads around how long the lockdown went on. If the lockdown went on three months extra, we could lose $10 million. If it went on six months, we could lose $20 million. We’re just very cautious about that. We’re trying to think about what are the areas of the internet that are going to stay healthy?