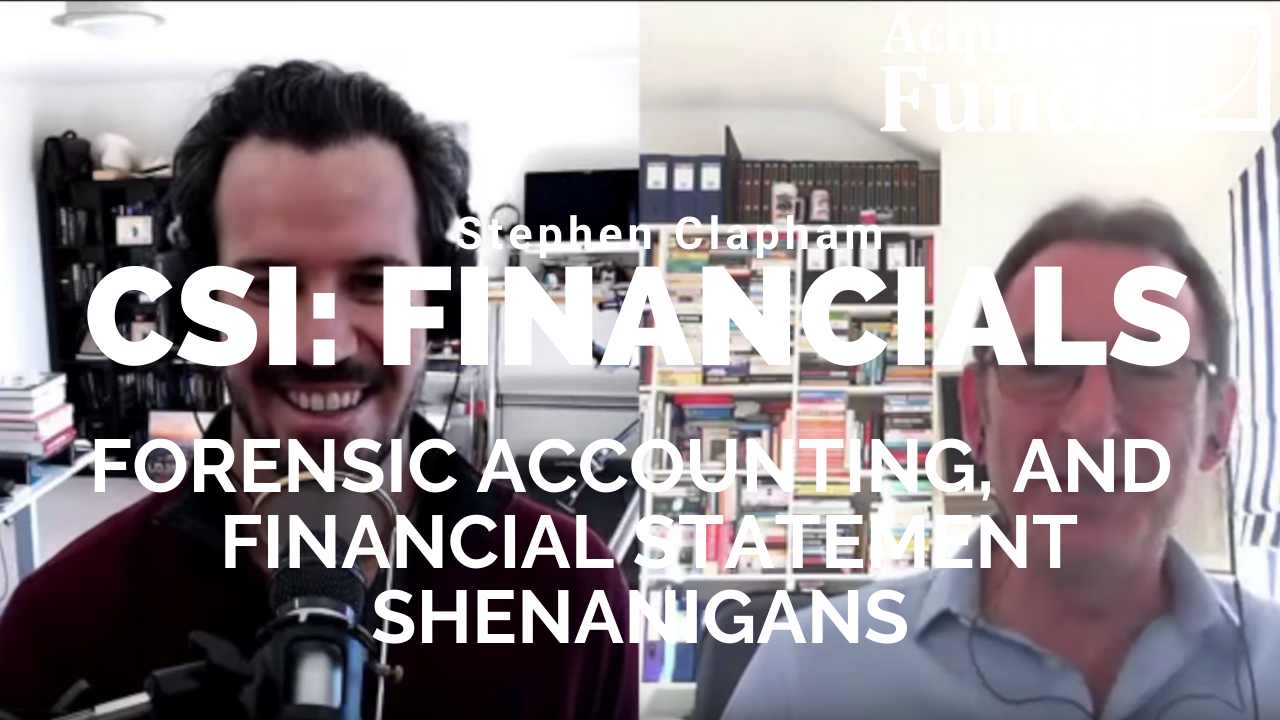 During his recent conversation with Tobias, Stephen Clapham, founder of Behind The Balance Sheet, discussed the need to beware of companies with complicated accounting policies. Here’s an excerpt from the interview:

Tobias Carlisle:
Let’s talk about an individual name, or a few. Are you familiar with Tesla?

Stephen Clapham:
Oh, I don’t … I’ve got … people are so, so upset about Tesla. I don’t really have a view on the stock, and I do think some of their accounting is very questionable. I’ve had a number of debates. Baillie Gifford, so full disclosure here. Baillie Gifford is one of my largest clients. Baillie Gifford are fantastic, gifted investors and I love going up to Edinburgh and doing the courses there because I always get engaged in great debates. They were very funny. I did the first course and I went up and I said … and Netflix appears in my course, because Netflix is dirty in the accounting side. I said, “I’m very sorry, but I’m going to talk about Netflix,” and they go, “Don’t be sorry. We’re interested.”

Stephen Clapham:
One of the reasons they’re so successful is they’ve got very open minds. Strong views loosely held. They’re very interested in the counter argument, and it’s so important for investors to be able to do that. Not all professional investors have got that open a mind. We’ve had a number of debates about Tesla. We’re working on the Tesla account, actually, at the moment and we’re thinking about doing a webinar series on going through the Tesla accounts and here’s the thing. The trouble with Tesla is it incredibly complicated and it’s very difficult to know what the numbers should be because you don’t have a steady state. It’s been growing very quickly so you can’t say, “Oh, this ratio has moved and that’s an indicator of a problem,” because that ratio could have moved for any one of five reasons because they’ve opened a plant in China, they’ve increased the volumes of the model. There’s numerous, numerous reasons why the numbers change.

Stephen Clapham:
So Tesla’s quite a difficult one, but it’s got … some of the policies are weird. So I got pulled up for talking about their trade in policies. Now, in the U.K., to my knowledge they don’t take trade ins. I understand by the barrage of abuse I received on Twitter than in America they’ll take a trade in. Thank you. I’m now better informed. The problem is, I had one guy in particular just really giving me such a hard time, such a hard time on Twitter about the trade ins. So I said to him, “Thanks very much for pointing this out. I hadn’t realized that they took trade ins in the United States. Can you, then, explain the trade in accounting policy, because it’s written in English but I don’t understand it.” He couldn’t explain it.

Stephen Clapham:
When you read accounting policies, in my experience, good companies have simple accounting policies which clearly explain what they’re doing in accounts. Companies which cheat don’t, and so the more complicated the language, the more difficult it is to understand, the more likely it is that they’ll be cheating. It’s not an automatic 1:1 correlation causation, but what I’ve found is that companies that are cheating tend to throw up a fog around what they’re doing to make it more impenetrable and so as soon as I read a set of accounting policies that are difficult to follow, my hackles get up. I then think, “Ah, here’s a potential shore.” Tesla, that fits that.

Tobias Carlisle:
One of the things about Tesla, one of the things that makes Tesla very difficult is that rapid growth often consumes cash flow and so that’s one explanation for the lack of cash flow, but another one is just that the revenue numbers seem to be very impressive for the most part, although last year it was like 2% growth, but the cash flows have not followed the revenue numbers. They’ve been flat or negative for the most part.

Stephen Clapham:
In a way, if it was a perfectly legitimate and beautifully accounting everything super clean, it might not generate cash, right, because there is all sorts of reasons why it might not be generating cash. It’s going through a massive amount of re-profiling of its production facilities and the way it produces the product. It’s opening loads of new factories. These companies are changing very rapidly can be quite difficult.

Stephen Clapham:
A good example of this is Aston Martin in the U.K., where they’ve not been generating any cash and they’ve been doing a lot of cost capitalization and in the case of Aston Martin it’s obvious that the company came to the stock market at the wrong price. Now, you could argue about Tesla’s stock price and we’d be here until it’s bedtime. There are arguments for and arguments against. I mean, the arguments against I think are more powerful and more plausible at this level it’s been at recently. You can make the arguments in both ways, but I think the Tesla accounting is very opaque, very difficult to understand. The cash flow may or may not be as you would expect. It’s just very, very complicated and if they were cheating, would anybody be surprised?