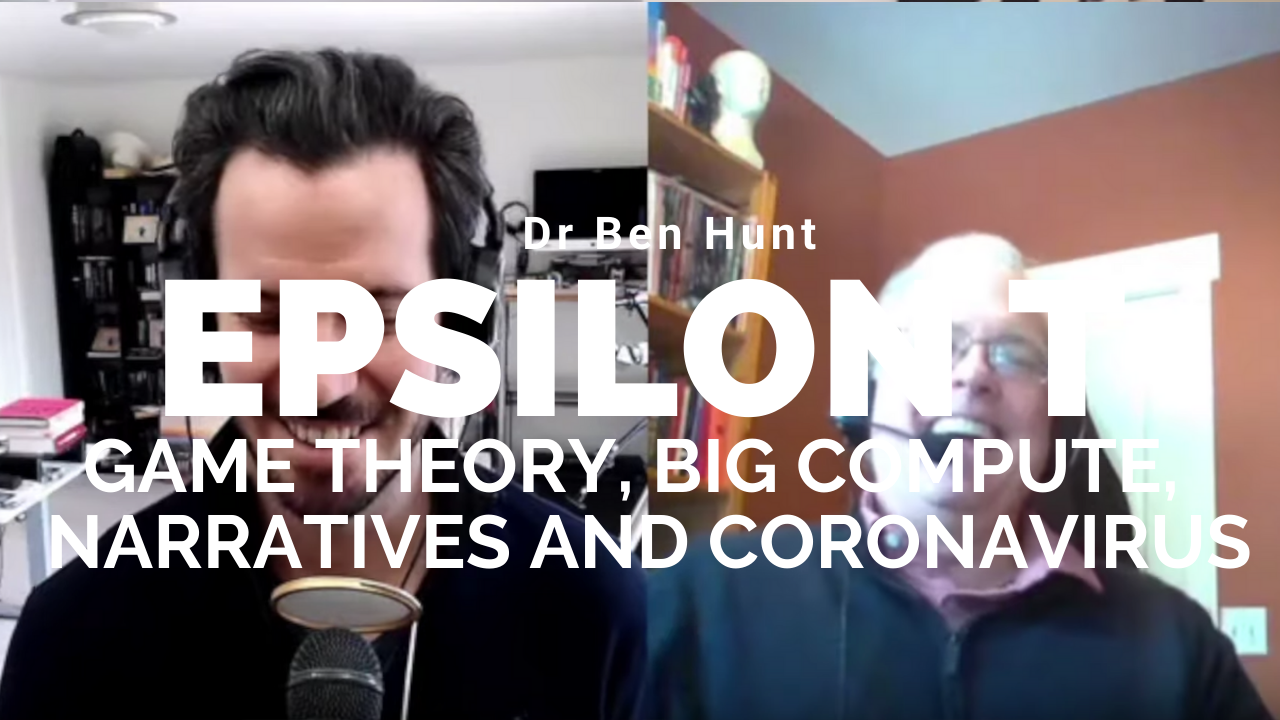 During his recent interview with Tobias, Dr Ben Hunt from Epsilon Theory discussed The Narrative Machine & Big Compute. Here’s an excerpt from the interview:

Tobias Carlisle:
That’s fascinating. One of the interesting visualizations that you put on Epsilon Theory and you discuss it regularly, the narrative machine or the narrative engine as that’s reflected in that graphic. Could you explain to us what that is and what is the purpose of it? What’s its function?

Dr Ben Hunt:
Sure, sure. Well, as I described earlier, what I really want to do in my research is, visualize, and I mean that literally, visualize the unstructured data that surrounds us, the water in which we swim. And this is an idea. It’s not original to me by any stretch of the imagination. So, when I was doing my dissertation research, and I wasn’t applying it to investing, I was applying this to public opinion being mobilized for countries that were going to start a war. And the idea was, well, we should be able to see some signs of governments making this effort, to try to rally public opinion before they start shooting at someone.

Tobias Carlisle:
They demonize the other side.

Dr Ben Hunt:
Exactly, exactly. There’s got to be a reason, even if you’re a dictatorship or the like, you still care, you still want public opinion to be on your side, before you start something risky, like start a fight. And so, we should be able to see that in newspaper editorials, right? So, places where governments are able to get their opinion out there. And so again, this isn’t a new idea, and again, it wasn’t original to me, it’s been out there for a long time. The problem we had though with visualizing this, with applying, I’ll say science to this, was that, until recently, it was just so hard to measure. Measure is the wrong word.

Dr Ben Hunt:
It was so hard to collect. When I was doing this research, 30 some odd years ago, I would hire undergraduates to go into the bowels of Widener library and read microfiche. And then translate these editorials written in Spanish or German, and then I would write out the code for this on a digital equipment mini frame. I think I used Pascal. And all these words I’m using will be jibberish to half of your listeners here. Right? Pascal? What’s that? Right? I would have used for triad, but anyway, that’s the long story.

Dr Ben Hunt:
I mean I was doing this pit stop before R was around. It didn’t exist. Today, not only do you have big data, meaning I can tap into Dow Jones, I can tap in to Thomson Reuters, I can tap into LexisNexis and everything that was published in the world is available to me. Boom. Like that. It’s all there. It’s all there. Right? Even more importantly though, it’s not big data, it’s big compute, because at the core of how you visualize, how you measure, how you analyze vast quantities of text, that’s quantities of unstructured data. Frankly it’s not AI, it’s not machine learning. it is brute force computing, processing power, which we now have available to us in unlimited capacity. Right?

Dr Ben Hunt:
So, for me to be able to just, plug into the wall and get as many flops and processes as I need from AWS or from Azure, I mean, that’s what makes this possible, because what we call natural language processing, again, it’s not complicated, right? Here’s what you’re doing. You’re taking a bag of text, right? A bag of words, an article, a transcript, what have you, and you want to compare every what we call an engrams, a word or a phrase, every word or phrase within that bag of texts. And you want to compare it to every word or phrase, every engram and another bag of text, and to another and another and another. Again, it’s a simple comparison, right? But the numbers, because this is a factorial becoming incredibly large.

Dr Ben Hunt:
So for example, let’s say I’ve got a thousand articles, each article has a thousand words or units of meeting, a thousand engrams. That’s a thousand factorial. That’s half a trillion calculations. And I need to be able to do that like that, and a thousand articles with a thousand words, that’s small, right? We’re dealing with 10,000 articles, each with, unknown, a lot of words in them. So it’s not just big data. What’s even more important and this is what’s really been available to us. Just sort of the last three or four years and changes everything, is big compute. Because once then you create these giant matrices, which are all the connections. And that’s what we’re measuring. We’re measuring the connections between all of these bags of text, all of these collections of unstructured data.

Dr Ben Hunt:
Once you’ve got this gigantic matrix of all these connections, from there, as the kids would say, it’s just math, right? It’s matrix algebra, to measure the structure of these giant matrices. And you can visualize it. You’ve got some measurements of the structural aspects, you can do time series, you can compare it then to structured data sets, like price, like volume, all the stuff that we care so much about in investing, that’s at the heart of it, right? And what you’re talking about, the visualization is just, call it a graph, right? A map. You’re basically taking this multidimensional matrix and you’re flattening it, into two dimensions. So you can actually see the clusters of relationships, the articles that are similar to other articles, not because I’ve read all 5,000 articles and can tell you what they mean, but the computer processor, it doesn’t know what this stuff needs. It’s just showing us here are the relationships, here’s the gravity of words.

Dr Ben Hunt:
It’s just so cool to see the world, what I like to call narrative world. And when you see it for the first time and you think, Oh wow, I’m finally seeing this ocean that I know that I swim in all the time and now I can actually see it. Man, it changes the way you see the world. It really does.

Tobias Carlisle:
For folks who haven’t seen it, you need to go to epsilontheory.com, and have a look at it. But it’s something like a coral growth maybe with different colors and it shows collections of these different narratives I guess. And so I just want to ask you, in terms of interpreting it, you look at these, there are these narratives that become obvious, because the same expressions are being used and they’re trying to push a point of view. Well, let me just ask you, how you interpreted first, and then a second question would be, at a second level, do you interpret it as being, some of those stories are being put into that, to influence public opinion? Some of them are just clearly picking up those things because they agree with that point of view. But is that… just those two questions? Sorry Ben, I know that’s quite-

Dr Ben Hunt:
No, no, no, and those are really at the core of all of this, what are we looking at? What does it mean? And how does it get here, right? What’s the life cycle of it? How does it get here? The way I like to think about these graphs, I like to think of them is like, I call them a star chart, right? It’s like looking at a galaxy, because distance and gravity is what we’re really measuring here, right? So you look at these pretty pictures, right? You can turn them upside down, you can flip them up or down. None of that matters. What matters is distance. What matters is centrality, right. There’s no, again, human intervention here. It’s called an unsupervised search. And so, what you were seeing here is a representation of just the computer telling you through this brute force mechanistic comparison.

Dr Ben Hunt:
Oh, these articles, we’ll call them nodes, the little dots, each little individual star in the star chart, right? If they share a lot of language, right? A lot of grammar, a lot of phrasing, they’re going to cluster it together, right. It really is the visualization, it really is the same. It’s a gravity formula. It really is. Right? And if they don’t share language, if they don’t share ideas and words, well, they’re going to be very distant, and there’s going to be no connective tissue between them. That’s the first thing to get square, when you’re thinking about this, it’s centrality, right? Because if you’re in the center of this map, then you’re exerting gravity on everything, right? You’re at the core of what meaning there is for whatever it is you’re searching on or you’re looking at.

Dr Ben Hunt:
And the second, is to think of the clustering here. And how, either everything gets tightly clustered, everything is about one topic. They all have this shared language or you’ve seen this lot of times, this indicates complacency in markets. It’s usually a cluster is off to itself, very few connections between the different clusters on something around international trade or something like that. What works for investing is very different, right? For those different States of the world. Now this gets to your second question, right? Which is like, well, are these clusters of meaning, the shared language, a meme? Think of it as a meme, right? A narrative can be like a meme, and these things have a life cycle, right? You can see them grow, you can see them reproduce, maybe merge and ultimately they die. You see them fade away. And so, the question is, well, how does that work? Right? Did they just come, out of the ocean in which we swim, by luck, by chance, some global event creates it.